Charges for Stealing Property. Larceny is just a fancy legalese term for “stealing” or “theft.” 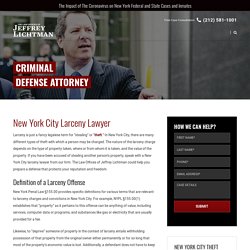 In New York City, there are many different types of theft with which a person may be charged. The nature of the larceny charge depends on the type of property taken, where or from whom it is taken, and the value of the property. If you have been accused of stealing another person’s property, speak with a New York City larceny lawyer from our firm. The Law Offices of Jeffrey Lichtman could help you prepare a defense that protects your reputation and freedom. Definition of a Larceny Offense New York Penal Law §155.00 provides specific definitions for various terms that are relevant to larceny charges and convictions in New York City. Likewise, to “deprive” someone of property in the context of larceny entails withholding possession of that property from the original owner either permanently or for so long that most of the property’s economic value is lost.

What is Petit Larceny? What is Grand Larceny? New York Federal Criminal Defense Lawyers. Becoming ensnared in a federal criminal case, whether as a target of an investigation, a witness or a defendant, is a life-altering event. 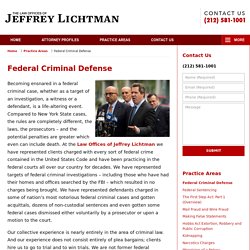 Compared to New York State cases, the rules are completely different, the laws, the prosecutors – and the potential penalties are greater which even can include death. At the Law Offices of Jeffrey Lichtman we have represented clients charged with every sort of federal crime contained in the United States Code and have been practicing in the federal courts all over our country for decades.

We have represented targets of federal criminal investigations – including those who have had their homes and offices searched by the FBI – which resulted in no charges being brought. We have represented defendants charged in some of nation’s most notorious federal criminal cases and gotten acquittals, dozens of non-custodial sentences and even gotten some federal cases dismissed either voluntarily by a prosecutor or upon a motion to the court.

The Law Offices of Jeffrey Lichtman Logo. New York Marijuana Possession Lawyers. Despite sentencing reform and the movement in various states to decriminalize or legalize recreational marijuana possession, being accused of possessing or selling marijuana or a controlled substance remains both illegal and seriously punished here in New York. 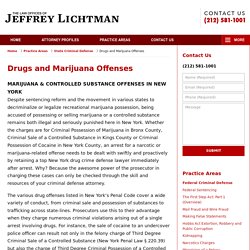 Whether the charges are for Criminal Possession of Marijuana in Bronx County, Criminal Sale of a Controlled Substance in Kings County or Criminal Possession of Cocaine in New York County, an arrest for a narcotic or marijuana-related offense needs to be dealt with swiftly and proactively by retaining a top New York drug crime defense lawyer immediately after arrest. Why? Because the awesome power of the prosecutor in charging these cases can only be checked through the skill and resources of your criminal defense attorney. The various drug offenses listed in New York’s Penal Code cover a wide variety of conduct, from criminal sale and possession of substances to trafficking across state-lines.

Jeffrey Lichtman Attorney. New York DWI Lawyers Jeffrey Lichtman. Whether you are arrested for DWI (also referred to as driving under the influence, or DUI in jurisdictions outside New York) or driving while ability impaired by drugs (DWAI-Drugs), your predicament remains the same: trying to avoid jail time and the lifelong consequences of a criminal conviction. 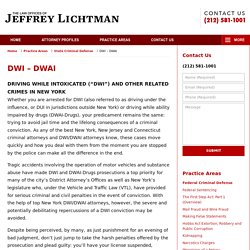 As any of the best New York, New Jersey and Connecticut criminal attorneys and DWI/DWAI attorneys know, these cases move quickly and how you deal with them from the moment you are stopped by the police can make all the difference in the end. Tragic accidents involving the operation of motor vehicles and substance abuse have made DWI and DWAI-Drugs prosecutions a top priority for many of the city’s District Attorney’s Offices as well as New York’s legislature who, under the Vehicle and Traffic Law (VTL), have provided for serious criminal and civil penalties in the event of conviction. New York DWI Violations VTL 1192.1 Driving While Ability Impaired (DWAI) – Impaired By Alcohol.

New York Robbery Lawyers Jeffrey Lichtman. Many people in New York have a misconception about what Robbery is. 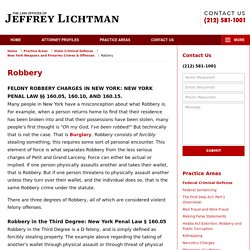 For example, when a person returns home to find that their residence has been broken into and that their possessions have been stolen, many people's first thought is "Oh my God, I've been robbed! " But technically that is not the case. That is Burglary. Robbery consists of forcibly stealing something, this requires some sort of personal encounter.