How iRacing Improves Your Racing Knowledge and Skills. On September 2004, Dave Kaemmer co-founder of the Papyrus Design Group and John Henry came together and founded iRacing. 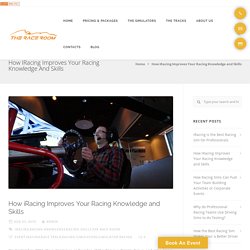 Back then, the sim racing scene was as niche as niche could get. iRacing changed that. It pulled out all the stops and combined 100 years of racing knowledge into its virtual driving simulator. This driving simulator was so authentic that real world drivers began using it as a training tool. Since then, iRacing has come a long way in virtual sim racing. Partnered with Skip Barber Racing School, V8 Supercars, IndyCar, and NASCAR, iRacing offers some of the world’s best racetracks and cars on its simulator.

So how does iRacing improve your racing knowledge and skills you ask? How the Best Racing Sim Makes Your a Better Driver. Racing sims can absolutely make you faster, but only if you pick the right game. 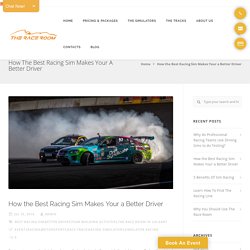 Today, the virtual versions of all the different and famous racetracks are more realistic than ever, replicating even cracks in the pavement. With the help of laser scanners, most developers scan the racetracks to capture every millimeter, every bump, camber change, rumble strip and railing so that you can experience perfection and superiority. Race Tracks Are Realistic On The iRacing Platform. The popularity of iRacing as a mainstream racing simulator is on the rise. 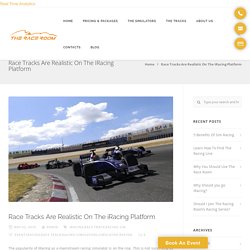 This is not surprising as the iRacing platform offers the most immersive, realistic and fun sim racing experience. Partnered with professional racing leagues such as NASCAR, IndyCar, V8 Supercar, Mazda, SRO, and Super GT as well as racing school Skip Barber to train amateur racers, iRacing is well on its way to becoming the first globally recognized e-sport.

It conducts official series racing based on a license system where every caliber of driver can compete against one another. These are the reasons what makes iRacing capable of offering a five figure prize pool. Scanned to perfection iRacing’s dedication in replicating real world tracks is astounding. Feel every jar and bump iRacing laser scanning technology allows for what is called, bump mapping. Choosing the right track to race at The Race Room. Can Simulator Racing Take you to Real World Motorsport? This question has been prevailing ever since sim racing laid its pragmatic foundation in the world of gaming. 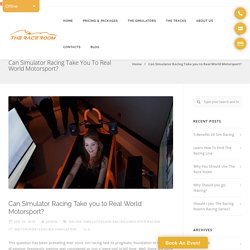 Previously, gaming was considered as just a mere tool to kill time. Well, there are some who still consider car simulator racing to be a waste of time. I won’t be a critic to say they’re ‘wrong’, but would love to give in a few real-life examples, which will certainly help them transform their ideologies in par with the current generation. Kazunori Yamauchi, the creator of the game Gran Turismo, once claimed that he could turn a gamer into a real-life racing driver. Not to astound you, but a self-confessed addict of ultra-realistic and top-selling racing game Gran Turismo 5, won the GT Academy competition in the year 2008, only to become a real-life race driver.

There are many such success stories of individuals who actually crossed-over to real-world racing, merely from their car driving simulator skills. Sim Racing And Its Impact On Real-life Racing. ‘Racing’, in general terms can be linked to competitions, speed and various objects or vehicles, such as a horse, car, motorbike, etc. 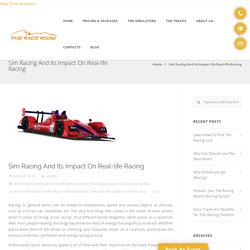 The very first thing that comes in the minds of keen drivers when it comes to racing, is ‘car racing’. It’s a different world altogether, when you’re on a racetrack. Well, most people reading this blog may know the kind of energy that engulfs a racetrack. Whether you’ve been behind the wheel or cheering your favourite driver on a racetrack, you’d know the amount of tension, perfection and energy racing around. Professional racers obviously spend a lot of time with their machines on the track, however, there are many who seek inspiration or learn new ways to get faster on different tracks through racing sims. Knowledge of Racetracks. Should I Join The Racing Room’s Racing Series? Racing requires impeccable driving skills, and of course, the most important skill is to find the limit of the car. 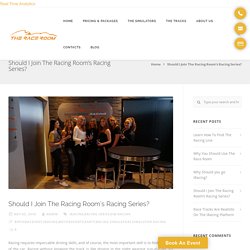 Racing without knowing the track, is like driving in the night wearing sun-glasses. It’s only when you do your homework thoroughly, you’ll start seeing your lap times drop. iRacing is a platform that allows you to race with other real world drivers virtually. It offers series racing in all classes of race cars. However, there is a staged licensing process, which will allow you to train and learn how to sim race with others at the same level as you. As your skills and lap-times improve, your license class moves from rookie to D to C to B to A. iRacing Is The Real Driving Simulator. Feel The Wheel iRacing has taken the e-sports scene by storm. 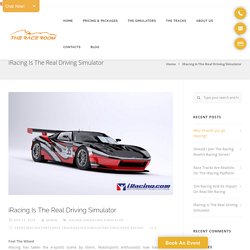 Motorsports enthusiasts now have a real opportunity to get behind the wheel of their favorite race cars. Physics and graphics on the iRacing platform are remarkable but what iRacing really does differently is offer an immersive racing experience. This is what makes iRacing the best racing sim in the world. Even professional racers can’t ignore what iRacing has to offer. iRacing can be easily supported by a decent PC with a stable internet connection. iRacing isn’t meant for ordinary gaming controllers. Fanatec offers gaming wheels and pedals to enhance your racing experience. Race Tracks Are Realistic On The iRacing Platform. 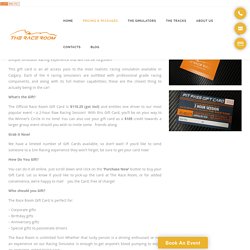 On-Site Rentals. Can Simulator Racing Take you to Real World Motorsport? All You Need To Know About Racing Simulators. 4 Things That Make You Love Motorsports. Motorsports is truly a global phenomenon. 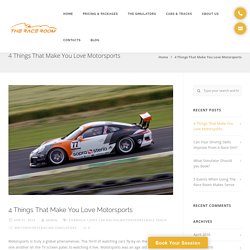 The thrill of watching cars fly-by on the race track past one another on the TV screen pales to watching it live. Motorsports was an age old tradition which has been recognized comparatively recently as a professional sport. These are some things about motor sporting that always make it exciting: Can Driving Skills Improve From Race Simulator? What connection is there between racing simulators and real world abilities. 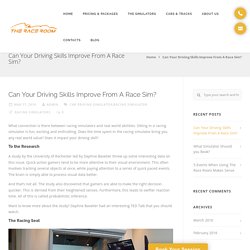 Sitting in a racing simulator is fun, exciting and enthralling. Does the time spent in the racing simulator bring you any real world value? Does it impact your driving skill? To the Research A study by the University of Rochester led by Daphne Bavelier threw up some interesting data on this issue. And that’s not all. Calgary's Racing Simulator Centre for Events, Parties. What Simulator Should you Book?

The Race Room offers different kinds of driving simulator packages depending on the customer’s requirements. Identify which package will give you the most for your money. Each package is unique and caters to the specific needs of the customer. Each package has a pre-race orientation and the simulator sessions are divided into a practice session, qualifying session, and main session.