Help for Adult ADD / ADHD: Tips for Managing Symptoms and Getting Focused. Stop drugging ADHD kids — and start teaching them to use their gifts. This year, Americans will spend more than $8 billion on members of the stimulant family, in a desperate attempt to keep squirmy school kids with ADHD glued to their chairs — or sometimes, even their kindergarten rugs. 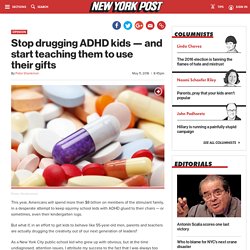 But what if, in an effort to get kids to behave like 55-year-old men, parents and teachers are actually drugging the creativity out of our next generation of leaders? As a New York City public-school kid who grew up with obvious, but at the time undiagnosed, attention issues, I attribute my success to the fact that I was always too fast, too off the beaten track, too squirmy.

I wasn’t put on medication to “make me like everyone else,” and I consider myself ridiculously fortunate to have had teachers at LaGuardia High School of Music and Performing Arts who recognized my creativity and encouraged me to run with it, instead of convincing my parents to shove a pill down my throat to calm me down. This extends to the workforce, as well. Why We're Talking About Music and Mental Health This Week. "This is how artists deteriorate," said Kendrick Lamar last year, speaking about how fame and touring affected his mental health, "if you don't catch yourself. 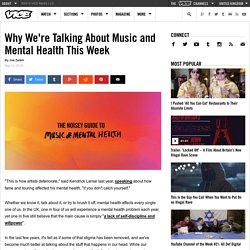 " Whether we know it, talk about it, or try to brush it off, mental health affects every single one of us. In the UK, one in four of us will experience a mental health problem each year, yet one in five still believe that the main cause is simply "a lack of self-discipline and willpower". In the last few years, it's felt as if some of that stigma has been removed, and we've become much better at talking about the stuff that happens in our head. While our government continues to damage and remove the infrastructure and support networks that are so key to those suffering, the public debate and sense of awareness is becoming louder and more empathetic by the day. This week on Noisey, we've decided to mark Mental Health Awareness Week by focusing on a specific issue: mental health in the music industry.

This is changing. How to use ADHD to your advantage and improve your life. Last year, I had two weeks left on deadline for a book I was writing. 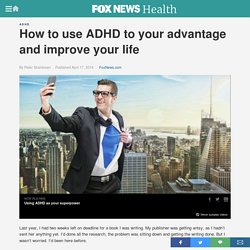 My publisher was getting antsy, as I hadn’t sent her anything yet. I’d done all the research, the problem was sitting down and getting the writing done. But I wasn’t worried. I’d been here before. With 12 days left until my deadline, I went to the United Airlines website, and bought a round trip business class ticket to Tokyo, leaving the next day.

I got on the plane, armed with nothing but my laptop, a power cord, and my phone. When the plane took off, I took out my laptop, and in the 14 hours it took us to get from Newark to Tokyo, I wrote chapters 1-5. When I tell this story to “normal” people, they look at me like I’m insane. Not one normal person. But then, if you’ve ever met me, you know: I’m not normal. It means I have attention deficit hyperactivity disorder or ADHD. I understand that my brain works differently than normal people. I fall out of airplanes, for example. ADHD Isn’t My Disorder, It’s More Like My Superpower. This feature is part of 'The Noisey Guide to Music and Mental Health' (in association with Help Musicians UK).You can read more from this series right here, and follow 'Mental Health Awareness Week' on Twitter here. 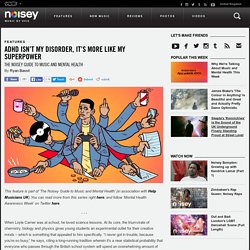 When Loyle Carner was at school, he loved science lessons. At its core, the triumvirate of chemistry, biology and physics gives young students an experimental outlet for their creative minds – which is something that appealed to him specifically. “I never got in trouble, because you’re so busy,” he says, citing a long-running tradition wherein it’s a near statistical probability that everyone who passes through the British school system will spend an overwhelming amount of time toasting splints, magnesium, and jelly babies over Robert Bunsen’s barrel of fire and fun. Around the same time, Carner was diagnosed with attention deficit hyperactivity disorder.

“I just thought I was this wrong and crazy kid and no one else understood”, he says. So what is it?