The meaning of the 4.0. The Document Foundation will be releasing LibreOffice 4.0 in the beginning of February. 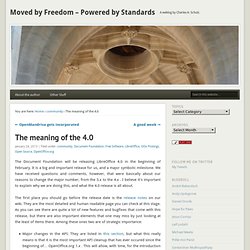 It is a big and important release for us, and a major symbolic milestone. We have received questions and comments, however, that were basically about our reasons to change the major number, from the 3.x to the 4.x . I believe it’s important to explain why we are doing this, and what the 4.0 release is all about. The first place you should go before the release date is the release notes on our wiki. They are the most detailed and human readable page you can check at this stage. LibreOffice 4.0 ReleaseNotes. About this page This is an in-progress scratch-pad of notes to build release notes from as and when we release. 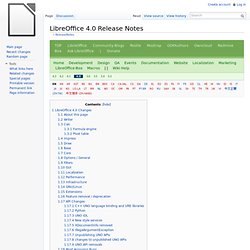 Stuff Michael Meeks is doing. Overview Last night I was appalled and saddened to see that Mozilla's principled decision to do the right thing, and stand up to a savage and vindictive witch hunt, seemingly conducted and cheer-lead both by those employed by Mozilla Corp. and others outside the organisation, had finally worn people down enough to do something that looks horribly illiberal and which seems to betray the very basis of critical protections of freedom of political views. 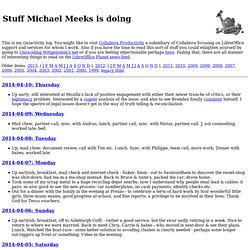 By which I mean accepting Brendan's (apparently principled) resignation. Of course, normally the real reasons behind the scenes are opaque and I've no view or insight into Brendan: his strengths and weaknesses for the role, a great technical CV, industry, leading insight etc. doesn't necessarily make for a great CEO. Quite possibly poor communication around an issue like this is a good enough reason to remove support such that resignation is the only option. Much as I admire Matthew Garret & his technical work, his take on the topic and. LibreOffice4. Development plans for LibreOffice 4.x releases This is about some fine piece of vaporware. 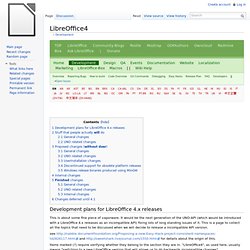 It would be the next generation of the UNO-API (which would be introduced with a LibreOffice 4.x releases as an incompatible API) fixing lots of long standing issues of it. This is a page to collect all the topics that need to be discussed when we will decide to release a incompatible API version. see and for details about the origin of this. Items marked (?) Stuff that people actually will do In order not to be a vaporware, the current plan is to collect important, binary incompatible stuff that people actually will do. General changes. The best LibreOffice plugin collections. LibreOffice Extension: CADLO Published › October 23, 2011 // 0 Comments Such as, the Draw module of LibreOffice / OpenOffice.org makes it possible to make technical drawing.

CADLO adds some functions that one can find in other CAD. For example : a wider set of anchor with the graphic entities (ends, intersection, middle, perpendicular, tangent) ; input of absolute or relative coordinates Cartesian or polar ; input of the radius, diameters or lengths ; an axonometric mode to constrain to horizontal,... LibreOffice Extension: Export As Images Published › October 23, 2011 // 0 Comments Export all the Impress slides or Draw pages as images of JPG, PNG, GIF, BMP and TIFF format. LibreOffice Extension: Fixed Values for Calc Published › October 16, 2011 // 0 Comments This extension creates two menu items in Calc to insert current date or current time in the selected cell as a fixed value. LibreOffice Extension: Instant Word Count Published › October 16, 2011 // 0 Comments Download Instant Word Count. 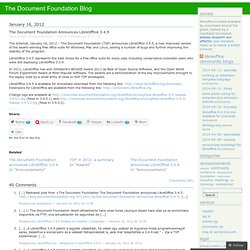 LibreOffice 3.4.5 represents the best choice for a free office suite for every user, including conservative corporate users who were still deploying LibreOffice 3.3.4. In 2011, LibreOffice has won InfoWorld’s BOSSIE Award 2011 as Best of Open Source Software, and the Open World Forum Experiment Award of Most-Popular Software. The awards are a demonstration of the key improvements brought to the legacy code by a small army of close to 400 TDF developers. The Document Foundation Planet.