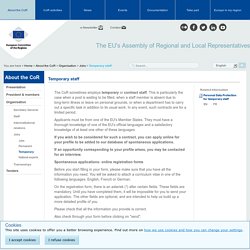 This is particularly the case when a post is waiting to be filled, when a staff member is absent due to long-term illness or leave on personal grounds, or when a department has to carry out a specific task in addition to its usual work. In any event, such contracts are for a limited period. Applicants must be from one of the EU's Member States. The European Economic and Social Committee - Jobs. Introduction Spontaneous applications: Online registration forms Introduction The European Economic and Social Committee (EESC) generally recruits staff through open competitions or selections. 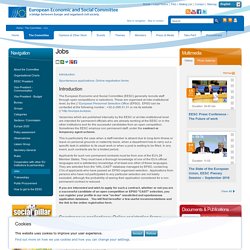 These are organised at inter-institutional level, by the European Personnel Selection Office (EPSO). EPSO can be contacted at the following number : +32-2-299.31.31 or via its website. EU institutions and agencies. EU institutions Applications for an EU Career are made through a centralised recruitment process. 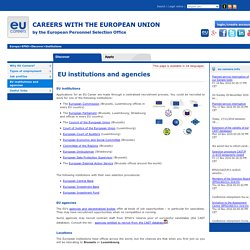 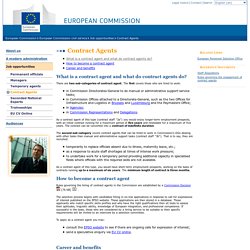 There are two sub-categories of contract agent. The first covers those who are hired to work: As a contract agent of this type (contract staff "3a") you would enjoy longer-term employment prospects, with an initial contract running for a maximum period of five years and renewable for a maximum of five years. EU careers : The European Personnel Selection Office is the place to start!