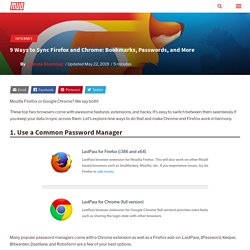 It’s easy to switch between them seamlessly if you keep your data in sync across them. Let’s explore nine ways to do that and make Chrome and Firefox work in harmony. Many popular password managers come with a Chrome extension as well as a Firefox add-on. 9 Ways to Sync Firefox and Chrome: Bookmarks, Passwords, and More. I Didn’t Write This Column. I Spoke It. Notebook / Laptop Reviews and News - NotebookCheck.net. Pricing - Onscale. BurnInTest software - PC Reliability and Load Testing. Firefox Is Back. It’s Time to Give It a Try. The 12 Best RSS Reader Apps to Follow Your Favorite Blogs, Sites, and Feeds.

When you want to follow specific writers, publications, and channels—to see every piece of content they publish—nothing beats an RSS reader app. RSS apps access web feeds published by websites, letting you aggregate and curate content you care about. Instead of visiting multiple sites, just open your favorite RSS app to see all new content in a central source. If you're still looking for a replacement for Google Reader or Digg Reader, or you're just ready to start experiencing the web chronologically, check out the following 10 RSS reader apps that keep you up to date—for free. What Makes a Great RSS Reader App? For over a decade, Google Reader was the gold standard for RSS apps—at least until July 2013, when Google abruptly stopped supporting the tool. 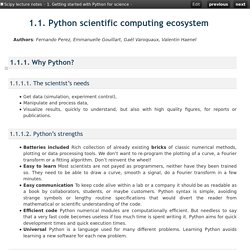 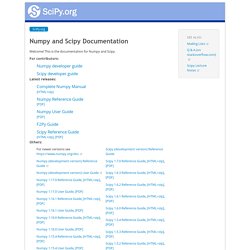 Scientific Computing Tools for Python — SciPy.org. SciPy refers to several related but distinct entities: The SciPy Stack, a collection of open source software for scientific computing in Python, and particularly a specified set of core packages.The community of people who use and develop this stack.Several conferences dedicated to scientific computing in Python - SciPy, EuroSciPy and SciPy.in.The SciPy library, one component of the SciPy stack, providing many numerical routines. 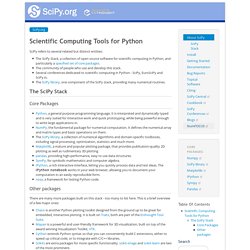 Core Packages Python, a general purpose programming language. It is interpreted and dynamically typed and is very suited for interactive work and quick prototyping, while being powerful enough to write large applications in.NumPy, the fundamental package for numerical computation. Other packages. TIOBE - The Software Quality Company. TIOBE Index for February 2020 February Headline: Objective-C on its way out Objective-C lost this month another 7 positions in the TIOBE index, thus being on the brink of slipping out of the top 20. 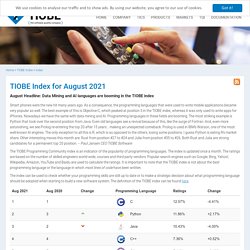 Actually this drop took much longer than expected. In 2014 Apple announced the new programming language Swift to be the successor of Objective-C. At that moment Objective-C was at position #3 in the TIOBE index and development of mobile apps for iPhones and iPads was booming. The TIOBE Programming Community index is an indicator of the popularity of programming languages.

The index can be used to check whether your programming skills are still up to date or to make a strategic decision about what programming language should be adopted when starting to build a new software system. The future is looking bright for Python – Thomas Stringer – Medium. Stack Overflow recently released a cool new tool called Trends. 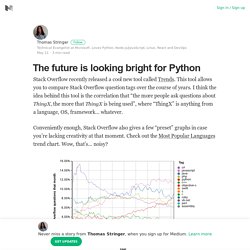 This tool allows you to compare Stack Overflow question tags over the course of years. I think the idea behind this tool is the correlation that “the more people ask questions about ThingX, the more that ThingX is being used”, where “ThingX” is anything from a language, OS, framework… whatever. Conveniently enough, Stack Overflow also gives a few “preset” graphs in case you’re lacking creativity at that moment.

Check out the Most Popular Languages trend chart. A Hacker's Tips For Protecting Your Digital Privacy. Protecting individual privacy from government intrusion is older than American democracy. 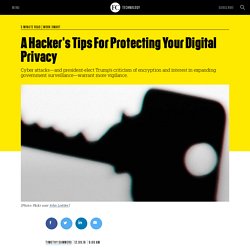 In 1604, the attorney general of England, Sir Edward Coke, ruled that a man’s house is his castle. This was the official declaration that a homeowner could protect himself and his privacy from the king’s agents. A New Web Browser for Our Friends – Vivaldi. Opera Founder Launches Vivaldi, a Browser for Demanding Users. After leaving Opera Software ASA in 2010, Jon von Tetzchner didn't expect to be back in the browser-building game. 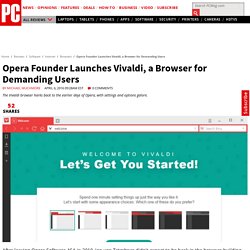 But dissatisfaction with current browser options has resulted in today's launch of Vivaldi 1.0, which boasts the most powerful tab-management features around and a Notes feature similar to that in Microsoft's Edge browser. The Vivaldi browser has been downloaded over 1 million times in pre-release builds, and though Version 1 goes final today, von Tetzchner and his geographically far-flung team plan many more feature additions, including an email reader, a syncing feature, and mobile app versions. Browsers that aren't tied to a big tech platform company have a hard time taking hold. 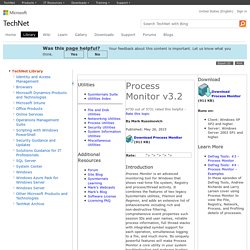 It combines the features of two legacy Sysinternals utilities, Filemon and Regmon, and adds an extensive list of enhancements including rich and non-destructive filtering, comprehensive event properties such session IDs and user names, reliable process information, full thread stacks with integrated symbol support for each operation, simultaneous logging to a file, and much more. Its uniquely powerful features will make Process Monitor a core utility in your system troubleshooting and malware hunting toolkit. Overview of Process Monitor Capabilities Process Monitor includes powerful monitoring and filtering capabilities, including: The best way to become familiar with Process Monitor's features is to read through the help file and then visit each of its menu items and options on a live system.