Verizon plans 5G trial service in 11 cities this year. Lab tests of pre-standard 5G wireless with multi-gigabit speeds are evolving into trial services that users can actually enjoy in the real world – though not necessarily while walking around with a smartphone. 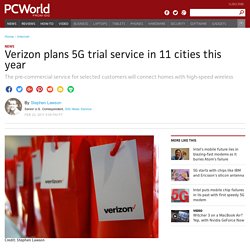 Verizon said Wednesday it will launch pre-commercial 5G service in 11 markets around the U.S. by the middle of this year, joining rival AT&T in aggressively deploying the future technology. At Mobile World Congress in Barcelona next week, carriers are expected to announce more upcoming 5G trials. The Verizon trial, planned for select users in cities including Atlanta, Denver, Miami, and Seattle, will use fixed wireless equipment for home broadband instead of mobile networks for roving devices. But it’s an early use of millimeter-wave frequencies that carriers say they will need for future high-speed mobile broadband. FCC looks to higher frequencies for 5G mobile. Frequencies once considered useless for most mobile services could start showing up on phones and other devices in a few years under a plan by the U.S. 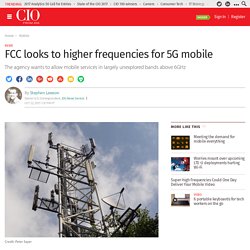 Federal Communications Commission. On Thursday, the FCC adopted a proposal to make four high-frequency spectrum bands available for services including mobile voice and data and machine-to-machine communication, or the Internet of Things. Though some of those bands are already used for technologies such as satellite, they have never been approved for regular mobile service. All told, the new bands include 3,850MHz of spectrum, enough to fuel so-called 5G mobile technologies that are expected to include high speed, low latency and support for many more connected devices in crowded areas, according to the FCC. 5G starts with chips like IBM and Ericsson's silicon antenna.

A piece of silicon less than three inches across may speed up the arrival of 5G mobile networks in the next few years.

IBM Research and Ericsson have developed a compact antenna array that can aim high-frequency radio signals at mobile devices and shoot them farther than they otherwise could reach, the companies said. Silicon integration makes it thin and energy efficient so it’s more commercially viable. Carriers expect 5G networks to deliver cellular data speeds in the gigabits per second, far faster than what today’s LTE services offer. 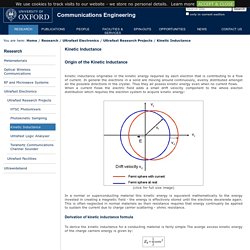 In general the electrons in a solid are moving around continuously, evenly distributed amongst all the possible directions in the crystal. Thus they all posess kinetic energy even when no current flows.When a current flows the electric field adds a small drift velocity component to the whole electon distribution which requries the electron system to acquire kinetic energy: (click for full size image) In a normal or superconducting material this kinetic energy is equvalent mathematically to the energy invested in creating a magnetic field - the energy is effectively stored until the electrons decelerate again. This is often neglected in normal materials as their resistance requires that energy continually be applied to sustain the current due to charge carrier scattering - ohmic resistance. CHAPT 11. n20e. EENG26000 Electronics 2 - Large Signal Amplifier Lab - Part 1 Class A. PA Design Using Harmonic Balance Simulation With Only S-parameters. Polarization Diversity Antennas for Compact Base Stations.

Polarization Diversity Antennas for Compact Base Stations This article describes the use of diversity reception for mobile radio base stations and compares the performance of space and polarization diversity techniques. 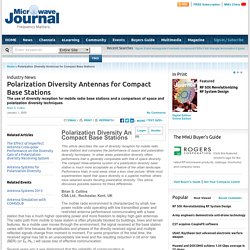 In urban areas polarization diversity offers performance that is generally comparable with that of space diversity. The compact three-antenna system of a polarization diversity base station is much more acceptable as a feature of the urban landscape. Performance trials in rural areas show a less clear picture: While most experimenters report that space diversity is a superior method, others have obtained results favoring polarization diversity. This article discusses possible reasons for these differences. Brian S. As an example, Figure 1 shows a typical graph displaying the way in which the signal received on a base station antenna changes as the mobile user moves along a street. Figure 5 shows typical states of the received polarization. Radio-Electronics.com: resources, analysis & news for electronics engineers. Radio-Electronics.com: resources, analysis & news for electronics engineers. What is MIMO? You might have noticed your new wireless broadband modem for some reason has two ports to plug in an antenna. 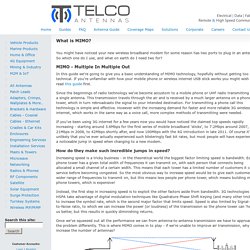 So which one do I use, and what on earth do I need two for? MIMO - Multiple In Multiple Out In this guide we're going to give you a basic understanding of MIMO technology, hopefully without getting too technical. If you're unfamiliar with how your mobile phone or wireless internet USB stick works you might wish to read this guide first. Since the beginnings of radio technology we've become accustom to a mobile phone or UHF radio transmitting with a single antenna. Understanding Adjacent Channel Power Measurements In Spectrum Analysis. 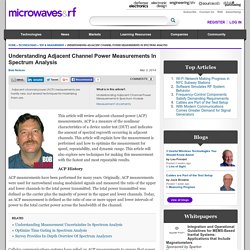 ACP is a measure of the nonlinear characteristics of a device under test (DUT) and indicates the amount of spectral regrowth occurring in adjacent channels. This article will explain how the measurement is performed and how to optimize the measurement for speed, repeatability, and dynamic range. MWEE SEP 2015. Comparing Nonlinear Vector Network Analyzer Methodologies. Figure 1 Generalized two-port network. 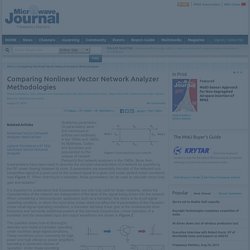 Scattering parameters (S-parameters) were first mentioned in articles and textbooks in the 1950s and 1960s by Matthews, Collins and Kurokawa and popularized by the release of Hewlett Packard’s first network analyzers in the 1960s. Since then, S-parameters have been used to describe the complex characteristics of a network by quantifying the RF power flowing between its ports. S-parameters are essentially the ratio of the reflected and transmitted signal at a given port to the incident signal at a given port under perfect match conditions (see Figure 1). When referring to a transistor, these parameters can be used to calculate return loss, gain and isolation.1 It is important to understand that S-parameters are only truly valid for linear networks, where the characteristics of the network are independent of the level of the signal being driven into the network. Figure 2 Linear operation of a transistor. 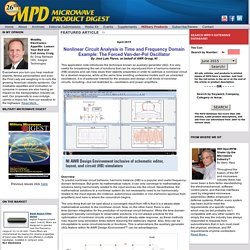 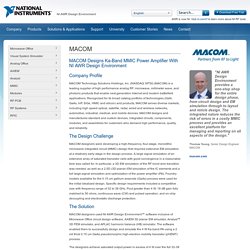