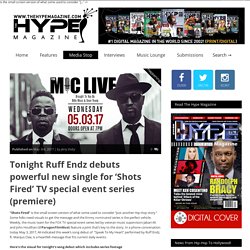 Some folks need visuals to get the message and the Emmy nominated series is the perfect vehicle. Weekly, the music team for the FOX TV special event series led by veteran music supervisors Jabari Ali and John Houlihan () feature a joint that’s key to the story. In a phone conversation today May 3, 2017, Ali indicated this week’s song debut of “Speak To My Heart” performed by Ruff Endz, ft. Marqus Clae, is a heartfelt message that fits current daily events. Here’s the visual for tonight’s song debut which includes series footage Bonus: Ruff Endz, Marqus Clae, Mack Wilds and Katlyn Nichol will perform live TONIGHT Wednesday May 3 at Mic Live in Studio City, CA. Multiplatinum recording artists, Ruff Endz, are coming to reclaim their spot as one of the industry’s top R&B groups with the release of “Speak To My Heart.” 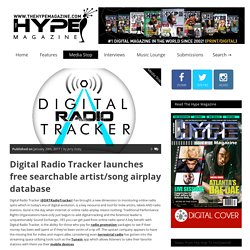 Gone is the day when internet or online radio airplay means nothing. » Holiday Special: “The Keys of Christmas” with Mariah Carey, DJ Khaled and More! Media Stop Published on December 20th, 2016 | by Jerry Doby The Keys of Christmas special takes YouTube creator Rudy Mancuso () on a magical journey to find the true meaning of the holidays and features performances by Mariah Carey, Ciara, DJ Khaled, Fifth Harmony, Nicky Jam, Bebe Rexha, Alex Aiono and many more. 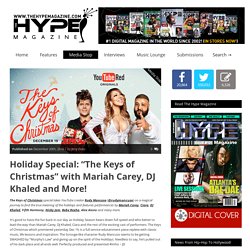 It’s good to have the fun back in our day as Holiday Season bears down full speed and who better to lead the way than Mariah Carey, DJ Khaled, Ciara and the rest of the exciting cast of performers. The Keys of Christmas which premiered yesterday Dec 19, is a full service edutainment piece replete with classic music, life lessons and inspiration. » The Hype Magazine Publisher and CEO Jameelah “Just Jay” Wilkerson receives ‘Trailblazing’ honors. Happenings Published on November 25th, 2016 | by Just Jay The Hype Magazine is proud to announce that our Publisher and CEO Jameelah “Just Jay” Wilkerson will be honored at “The Trailblazer Awards” December 4, 2016, at the historic Madame Walker Theatre. 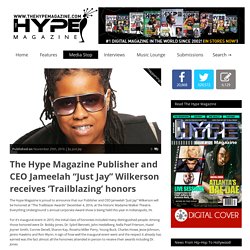 Everything Underground’ s annual corporate Award show is being held this year in Indianapolis, IN. For it’s inaugural event in 2015, the initial class of honorees included many distinguished people. Among those honored were Dr. About “Just Jay” For all those hip-hop lovers and rap music lovers, the CEO/Publisher of The Hype Magazine Jameelah “Just Jay” Wilkerson has showcased her skills as a business professional, marketing consultant, web designer, graphic designer, and songwriter. Instagram. Untitled. Artist Dru Ross is featured in The Hype Magazine, the #1 Digital/Print Hip Hop/R&B Magazine in the world as the Apollo Night LA "Artist Of The Week". 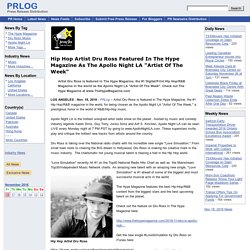 Check out The Hype Magazine at www.TheHypeMagazine.com Hip Hop Artist Dru Ross LOS ANGELES - Nov. 18, 2016 - PRLog -- Artist Dru Ross is featured in The Hype Magazine, the #1 Hip Hop/R&B magazine in the world, for being chosen as the Apollo Night LA "Artist Of The Week," a prestigious honor in the world of R&B/Hip-Hop music. Apollo Night LA is the hottest unsigned artist radio show on the planet...hosted by music and comedy industry legends Karen Sims, Guy Torry, Jocko Sims and Arif S. Kinchen, Apollo Night LA can be seen LIVE every Monday night at 7 PM PST by going to www.ApolloNightLA.com. » Doug E. Fresh and Doug the Pug ‘The #12Stinks of Christmas’ Hip-Hop Holiday Remix with Febreze. World News Published on November 10th, 2016 | by Jerry Doby Doug E. 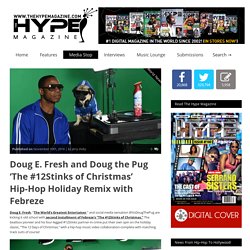 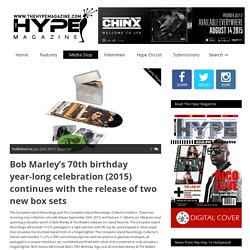 These two stunning vinyl collection sets will release September 25th, 2015, and feature 11 albums on 180-gram vinyl spanning a decade’s worth of Bob Marley & The Wailers releases on Island Records. The Complete Island Recordings will include 11-LPs packaged in a rigid card box with lift top lid, and wrapped in silver paper that simulates the brushed metal finish of a hinged lighter. The Complete Island Recordings: Collector’s Edition will included 11-LPs, a 70th anniversary slip mat and two photos in glassine envelopes, all packaged in a unique metal box set, numbered and lined with velvet and connected to truly emulate a hinged lighter. The 11 LP’s from the box set will also be broken out and released individually on 180-gram vinyl beginning September 25th. 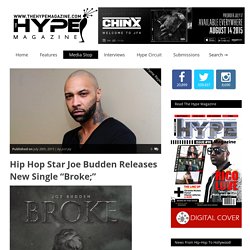 “Broke,” produced by Louis Bell, showcases Budden’s versatility as a rapper and musician. Listen here. “Broke” follows the relase of “F’ Em All,” the first song released from his forthcoming album All Love Lost, due out on October 9, 2015. Fans can preorder All Love Lost beginning on September 9, 2015. In addition, Budden launched a much talked about podcast a few months ago, titled I’ll Name This Podcast Later. Not only is Budden have a successful solo artist with three albums, EPs and mixtapes under his belt, he is a also member of acclaimed hip hop supergroup Slaughterhouse (with Joell Ortiz, Crooked I and Royce Da 5’9”). No Love Lost, Budden’s last studio album, debuted #1 on the Top R&B/Hip Hop Album Chart and Top 15 on the Billboard 200 chart.

BTS: Sports Illustrated + CIROC party Hosted by Puff Daddy. Fight weekend in Las Vegas this past weekend brought out the "Who's Who" and serious party goers looking for that super premium experience CÎROC and Puff Daddy bring to any event. 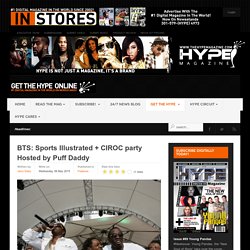 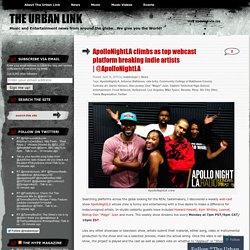 Wiz Khalifa's Taylor Gang Records Taps INgrooves Music Group for Worldwide Distribution. (PITTSBURGH, PA) Taylor Gang Records, the label founded by hip hop superstar Wiz Khalifa, announced today that they have selected INgrooves for global distribution and marketing. The first release expected under the new deal is an EP by the Pittsburgh-based rapper Chevy Woods who's currently making noise with his single "30 Deep," which is getting airplay on radio across the country and on MTV. Other artists on the label include Academy Award winner and Three 6 Mafia member Juicy J, who is also an executive at the label, Ty Dolla $ign, Courtney Noelle, Chevy Woods, Tuki Carter and Berner. "I'm really excited about this new partnership and can't wait to start pushing projects out!

2014 Global Mixx Music and Film Forum PRLog (Press Release) - Jun. 16, 2014 - Eight years has seen the annual Global Mixx Forum grow to add a Film component to its yearly event. This years Music and Film forum will be held in Chicago Aug 15-17th, 2014. Global Mixx has been the highlight of the summer and the go-to entertainment industry conference among both local and national attendees in the business as regards the entertainment industry in Chicago, and this year will expand its reach into the film and television section. With the advancement of technology, has come more opportunity for Indie Filmmakers, music supervisors, media buyers and on-screen hopefuls, to enter the realm of film and television. Review - CMG Presents Chapter One. Yo Gotti and His CMG Crew Cover the Summer Issue of 'The Hype Magazine' Yo Gotti and CMG cover The Hype Magazine summer issue #85 in stores June 26. HYPE Is Not Just A Magazine, It's A Brand: #1 Digital Magazine - Eco - Friendly - CD Mixtape Magazine - News From Hip Hop to Hollywood - Booking - Promotions - Videos Hosting & More.

The Hype Magazine Interview K Camp. K Camp is one of the young phenomenon's hitting the scene right now in the rap industry. Selling out major venues, bringing the crowd to their feet with his addictive delivery, the young man is one to watch in no uncertain terms. Getting a chance to meet the rising star in Atlanta face-to-face, let me get a sense of his self assured bearing and humble demeanor even though he's one of the hottest freshmen in the game right now. The Hype Magazine Interview Bobby V. Think Like a Man Too (Music from & inspired by the film) hits stores June 17 With Mary J Blige Ft. Pharrell Williams and The Dream. New York, NY — Epic Records announces the release of the official soundtrack album to the Think Like a Man sequel and one of the year's most anticipated comedies, Think Like a Man Too (Music From & Inspired by the Film), on June 17 in stores and across all digital retail providers. Music News II.

Industry Profile: Music Supervisor Mark Wike. Music News II. Die 4 Radio "The Drodian Show" W/ Pharoahe Monch, Fresh Kid Ice & Egyptian Lover 05/17 by Die4 Real Hip Hop. Music News II. On the ones and twos with DJ A-Tron. Background Celebrity DJ, DJ A-Tron (born Aaron Williams in South Central Los Angeles, CA) is one of the hottest DJ's on the market doing parties and events with everyone from A-list celebrity kids, to hip-hop’s hottest artists including A$AP Rocky, Rich Homie Quan, Nipsey Hussle, & many more. The 21 year old has strong online following with over 80K followers on his verified Twitter, and hundreds of thousands of listens on his Soundcloud , where he debuts his infamous mixes.