Hip Hop II. Introducing Hip Hop artist Phenom Wess: 'Picture Perfect' - Topeka Music. Phenom Wess has a long love affair with hip hop dating back to the age of 8 where he performed in a hip hop talent show at the Jackie Robinson YMCA in San Diego. 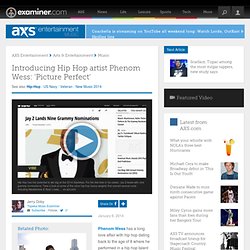 Facing the reality of economic difficulties to finance a music career and realizing his grades weren't good enough to get him into any of the colleges he desired, he enlisted in the United States Navy at the age of 17. Phenom is still currently serving his country in the Navy and is a veteran of multiple deployments yet his love for music has been cathartic for him, and he records from his soul.

Phenom just released his debut single "Picture Perfect" which is an insightful and rich story of a young man celebrating the lyrical dynamics of the hip hop of old. 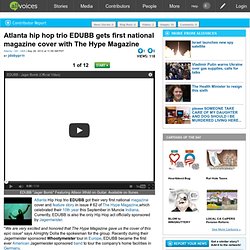 Their Whooty song has created a global phenomenon celebrating "White Girls with Booties" and the group received an international trademark for the term from the U.S. Government. Get more information on EDUBB via their official website EDUBBTV. EDUBB, Atlanta Hip-Hop Trio, known mostly for their risqué brand of “Party Music” (i.e. “Whooty” & “Rain Boots”) also unveiled their first concept-driven, full length effort "LEGENDS OF THE FALL" this year. "LEGENDS OF THE FALL" features Universal Republic’s Jackie Chain, T-Mo Goodie from the Legendary GOODIE MOB, and features production from Jazze Pha, DJ Burn One, John Boy “On da Track”(producer of VIC “Wobble” and EDUBB’s party hits “Whooty” and “Rain Boots”, among others. 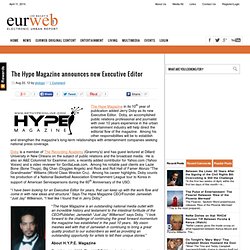 Doby, an accomplished public relations professional and journalist with over 10 years experience in the urban entertainment industry will help direct the editorial flow of the magazine. Among his other responsibilities will be to establish and strengthen the magazine’s long-term relationships with entertainment companies seeking national press coverage. Doby is a member of The Recording Academy (Grammy’s) and has guest lectured at Dillard University in New Orleans on the subject of public relations and the broadcast media. He is also an A&E Columnist for Examiner.com, a recently added contributor for Yahoo.com (Yahoo Voices) and a video reviewer for GorillaLeak.com. Among his notable past clients are Lazie Bone (Bone Thugs), Big Chan (Doggies Angels) and Rock and Roll Hall of Famer Alonzo “The Grandmaster” Williams (World Class Wreckin Cru). About H.Y.P.E. Established in 2002, The H.Y.P.E. How to Fail attending a Music Conference. Beyond my music career I do a lot of entertainment marketing for my company, Royal Heir Entertainment and speak at music conferences across the country (LA, Oakland, Detroit, Cleveland and more). 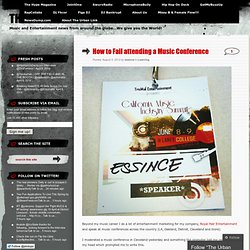 I moderated a music conference in Cleveland yesterday and something the promoter told me really stuck in my head which prompted me to write this. One of the artists, who also performed, complained that the turnout wasn’t good enough and he wanted to perform for more people and angrily demanded a refund claiming he knows everything we were teaching. (despite his whole crew being allowed in, fed, and another person was allowed to perform). Lupe Fiasco Talks New Album, Music He Listens to, Music Blogs and More with HHS1987. Matchbox Twenty Reveal “She’s So Mean”; New Video to Debut Today on YouTube; “She’s So Mean” Heralds Multi-Platinum Superstars’ First All-New Collection in a Decade; “NORTH” Arrives Everywhere on September 4th. Grammy Award (Photo credit: Wikipedia) “She’s So Mean” is the first single/video from Matchbox Twenty’s hugely anticipated new album, “NORTH.” 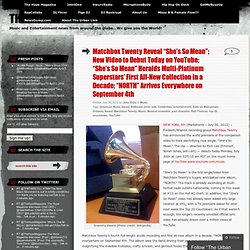 The track is already ascending at multi format radio outlets nationwide, coming in this week at #13 on the Hot AC chart. In addition, the “She’s So Mean” video has already been added into large rotation at VH1, with a TV premiere slated for later next week the Top 20 Countdown. As if that weren’t enough, the single’s recently unveiled official lyric video has already drawn over a million views at YouTube. Matchbox Twenty’s fourth full-length studio recording and first all-new album in a decade, “NORTH” arrives everywhere on September 4th. Thomas will be seen this fall as a mentor on the upcoming third season of NBC’s smash singing competition, “The Voice.” It's Almost Over - EDUBB Co-Starring T-Mo Goodie (Goodie MOB. Ep. 2 of The Leak Presents YUNG BARZ.