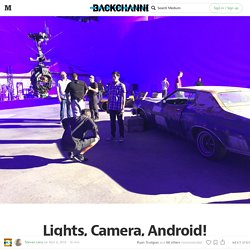 Features a scenario familiar to almost everyone who ever bought popcorn and a movie ticket. Location: The concrete ditch known as the Los Angeles River. Character: Damsel in distress — in this case a stylish young woman in contemporary garb. Action: Tracking shot of the woman as she runs—face often turning backwards in fear — from a hideous gargoyle. And then, something unexpected. Welcome to what might become the future of cinema. Spotlight Stories are brief, interactive entertainments — “immersive shorts” is the preferred term—originally conceived by the Advanced Technology and Projects team at Motorola, during the company’s brief life as a Google subsidiary.

But Spotlight Stories reach beyond the geeky advances into something that uses advanced tech to reframe storytelling itself. The lady? Brad Bird & Damon Lindelof Reveal the Process of Writing and Creating 'Tomorrowland' Brad Bird was asked to direct Star Wars, Episode VII. 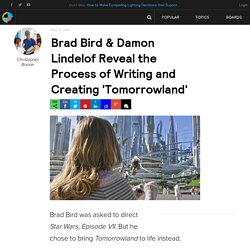 But he chose to bring Tomorrowland to life instead. While the movie shares the name of the beloved area of Disney's theme parks, Brad Bird and Damon Lindelof both see Tomorrowland as an original film, something Hollywood studios are making less and less these days. Bird claims the idea of bringing this original vision to the screen, which already had George Clooney attached and was in location scouting mode, was the main reason he turned down Star Wars.

And no, Bird and Lindelof did not add a Space Mountain action set piece to the film (although the signature ride does appear in the skyline of Tomorrowland in the film). Bird and Lindelof sat down with Talks at Google for a full hour to describe their process for writing and creating Tomorrowland. The key takeaway for all of us filmmakers is to remember that no one is going to make your movie for you. Filmmakers,Film Industry, Film Festivals, Awards & Movie Reviews. By Karim Ahmad | Indiewire May 15, 2014 at 9:22AM Here's why you need to create a storyworld for your film project. 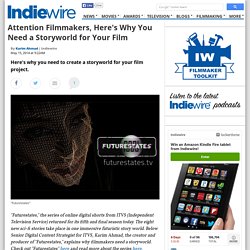 "Futurestates" "Futurestates," the series of online digital shorts from ITVS (Independent Television Service) returned for its fifth and final season today. The eight new sci-fi stories take place in one immersive futuristic story world. Below Senior Digital Content Strategist for ITVS, Karim Ahmad, the creator and producer of "Futurestates," explains why filmmakers need a storyworld. "Any great story is populated with not just one interesting character, but a host of them. " Storyworld 2011: Concept to Contract to Launch. Karen and Lucas pitch The Time Tribe at the Storyworld InProduction Showcase, Nov 1, 2011.

Digital media consulting from the inside out - DIGITAL MEDIA FROM THE INSIDE OUT - If nothing else, last week's Story World Conference in San Francisco affirmed the reality of a new creative movement devoted to transmedia storytelling. 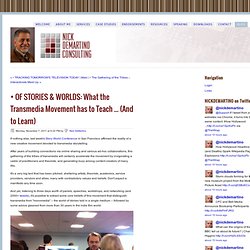 After years of building connections via online sharing and various ad-hoc collaborations, this gathering of the tribes of transmedia will certainly accelerate the movement by invigorating a cadre of practitioners and theorists, and generating buzz among content creators of many ilks. It's a very big tent that has been pitched, sheltering artists, theorists, academics, service providers, vendors and allies, many with contradictory values and beliefs. Don't expect a manifesto any time soon. And yet, listening to three days worth of panels, speeches, workshops, and networking (and 2000+ tweets), it's possible to extract some core beliefs of this movement that distinguish transmedia from "monomedia" -- the world of stories told in a single medium -- followed by some advice gleaned from more than 30 years in the indie film world.

Story architecture swc11 def2. Storyworld 2011 Showcase: Research & Developments. Finding the Story: Five Lessons from StoryWorld 2011. Content creators of all stripes came together this week for StoryWorld, an international gathering of transmedia storytellers. Our editor was on the ground in San Francisco and reports that there’s more to this story than you’d think.

It was Jeff Gomez, steward of such “story worlds” as Avatar, Pirates of the Caribbean and Coke’s Open Happiness, who drew the biggest cheers at the two-day StoryWorld Conference + Expo. “What a relief to get up here and not have to explain what I do,” Gomez said, and was rewarded with enthusiastic applause and a deluge of retweets. Billed as the first-ever conference of people engaged in transmedia ­– or multiplatform – storytelling, StoryWorld was a Dungeons and Dragons-meets-TED Talks gathering of filmmakers, writers, producers and marketers devoted to telling age-old stories in exciting new ways. Sure, everyone at StoryWorld agrees that “the story always comes first,” as the oft-repeated mantra goes. Jeff Gomez (Image by James Duncan Davidson via Flickr) Reflections on OccupyTransmedia.