Materialism. Materialism. Catholic Social Teaching: John Paul II, Laborem Exercens. In this article, I enter into our own time as I begin the discussion of the social encyclicals of our present Holy Father, John Paul II. 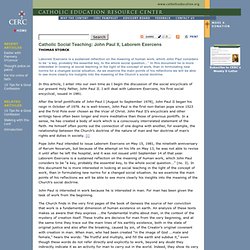 I will deal with Laborem Exercens, his first social encyclical, issued in 1981. After the brief pontificate of John Paul I (August to September 1978), John Paul II began his reign in October of 1978. As is well-known, John Paul is the first non-Italian pope since 1523 and the first Pole ever chosen as the Vicar of Christ. John Paul II’s encyclicals and other writings have often been longer and more meditative than those of previous pontiffs.