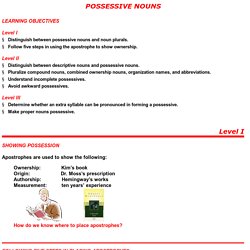 ~Mark Twain‘Very’ is the most useless word in the English language and can always come out. More than useless, it is treacherous because it invariably weakens what it is intended to strengthen. ~Florence KingSo avoid using the word ‘very’ because it’s lazy. 100 Exquisite Adjectives.

Plenty of tired adjectives are available to spoil a good sentence, but when you find just the right word for the job, enrichment ensues. What is the plural of photo? meanings in many languages. On Parallel Structures. Quick Quiz 1sub-verb agr. Quick Quiz 2sub-verb agr. The Coordinating Conjunction. Use a coordinating conjunction when you want to give equal emphasis to two main clauses. 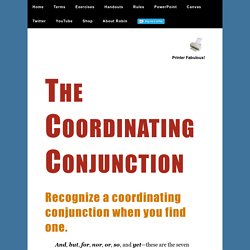 The pattern for coordination looks like this: Subordination, however, emphasizes the idea in the main clause more than the one in the subordinate clause. Generally, the patterns look like these: Read the pairs of sentences that follow. The first version coordinates the two ideas. To survive the fetal pig dissection, Rinalda agreed to make all of the incisions, and Frances promised to remove and label the organs.

CAUSE AND EFFECT -essay-graphic-organizer. Beginners course (stating preferences) TO LEARN ENGLISH all tenses. Present continuous OR Present simple? ADJECTIVES. Ws_halloween. Halloween Video — History.com. SUBJECT-VERB AGREEMENT. PREPOSITIONS. What is the plural of ____???? Opposites in English. Using Indefinite Pronouns. BusyTeacher: Free Printable Worksheets For Busy Teachers Like YOU! Presentation1 Comu. Listening Part A: TOEFL Exercise 5. TOEFL EXERCISE 5: In this exercise, listen carefully to the short conversation and question on the recording, and then choose the best answer to the question. 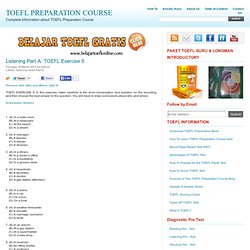 You will have to draw conclusions about who and where. (Indonesian Version) 1. (A) In a hotel room. (B) At a restaurant. (C) At the beach. (D) In a desert. GRAMMAR-QUIZZES and Explanations. Grammar.-explanations ESL/EFL Speaking lessons - Introducing people and oneself in English. Introducing yourself and others There is a range of ways to introduce yourself and people. 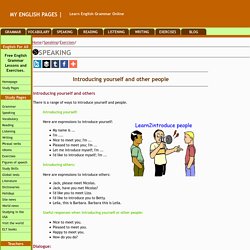 Introducing yourself: Here are expressions to introduce yourself: My name is ... I'm .... Nice to meet you; I'm ... Irregular Plural Nouns: plural noun markers with other endings. Lay verb conjugation in English. About Us Contact Favorites Mobile. 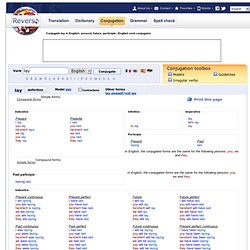 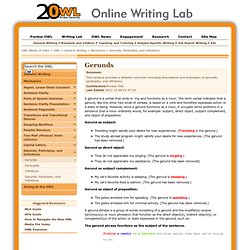 Contributors:Purdue OWLLast Edited: 2011-12-09 01:47:54 A gerund is a verbal that ends in -ing and functions as a noun. The term verbal indicates that a gerund, like the other two kinds of verbals, is based on a verb and therefore expresses action or a state of being. Participles. Gerunds and Infinitives Part 1. 1. 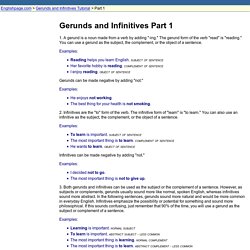 A gerund is a noun made from a verb by adding "-ing. " The gerund form of the verb "read" is "reading. " You can use a gerund as the subject, the complement, or the object of a sentence. Examples: Reading helps you learn English. Gerunds can be made negative by adding "not. " He enjoys not working. 2. To learn is important. Verb Tenses. Summary: This handout explains and describes the sequence of verb tenses in English. 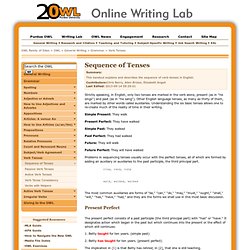 Contributors:Chris Berry, Allen Brizee, Elizabeth AngeliLast Edited: 2013-09-14 09:29:01 Strictly speaking, in English, only two tenses are marked in the verb alone, present (as in "he sings") and past (as in "he sang"). Other English language tenses, as many as thirty of them, are marked by other words called auxiliaries. Understanding the six basic tenses allows one to re-create much of the reality of time in their writing. Verb Tenses. In English, there are three basic tenses: present, past, and future. Each has a perfect form, indicating completed action; each has a progressive form, indicating ongoing action; and each has a perfect progressive form, indicating ongoing action that will be completed at some definite time.

Here is a list of examples of these tenses and their definitions: Simple Forms Present Tense Present tense expresses an unchanging, repeated, or reoccurring action or situation that exists only now. Grammar Web Guide. What I know about grammar is its infinite power. To shift the structure of a sentence alters the meaning of the sentence, as definitely and inflexibly as the position of a camera alters the meaning of the subject photographed. LESSON PLANS VARIOUS.

Parallel Structure with paired conjuction (Skill 15) Previous problem/Skill: Problem/skill with Parallel Structure with coordinate connector (Skill 14) The paired conjunctions both …… and, either …… or; neither …… nor; and not only ….. but also require parallel structures. The lecture was both informative and enjoyable Either the history exam or the physics exam is on Tuesday. The missing papers are neither on his desk nor in the file He visited not only his cousin but also his grandmother. Parallel Structure. Appositives. Summary: This handout defines appositives and explains how they are used. Appositives. Transition Words & Phrases. As a "part of speech" transition words are used to link words, phrases or sentences.

They help the reader to progress from one idea (expressed by the author) to the next idea. Thus, they help to build up coherent relationships within the text. Transitional Words This structured list of commonly used English transition words — approximately 200, can be considered as quasi complete. It can be used (by students and teachers alike) to find the right expression. There is some overlapping with prepositions and postpositions, but for the purpose of usage and completeness of this concise guide, I did not differentiate. Agreement / Addition / Similarity.