Coldplay - In My Place. Coldplay - Trouble. COLDPLAY LYRICS - Speed Of Sound. How long before I get in? 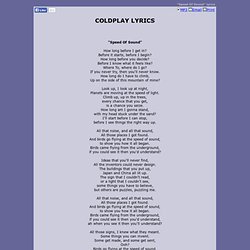 " COLDPLAY LYRICS - The Scientist. Come up to meet you, tell you I'm sorry You don't know how lovely you are I had to find you, tell you I need you Tell you I'll set you apart Tell me your secrets and ask me your questions Oh let's go back to the start Running in circles, coming in tails Heads on a science apart Nobody said it was easy It's such a shame for us to part Nobody said it was easy No one ever said it would be this hard Oh, take me back to the start. 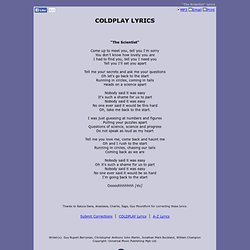 I was just guessing at numbers and figures Pulling your puzzles apart Questions of science, science and progress Do not speak as loud as my heart Tell me you love me, come back and haunt me Oh and I rush to the start Running in circles, chasing our tails Coming back as we are Nobody said it was easy Oh it's such a shame for us to part Nobody said it was easy No one ever said it would be so hard I'm going back to the start Ooooohhhhhhh [4x] Thanks to Raluca Dana, Anastasia, Charlie, Sage, Guy Mountford for correcting these lyrics. Coldplay - Yellow. Coldplay - Clocks. COLDPLAY LYRICS - Fix You. When you try your best, but you don't succeed When you get what you want, but not what you need When you feel so tired, but you can't sleep Stuck in reverse And the tears come streaming down your face When you lose something you can't replace When you love someone, but it goes to waste Could it be worse? 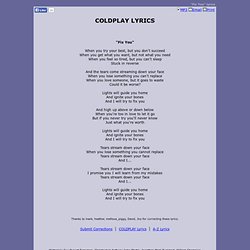 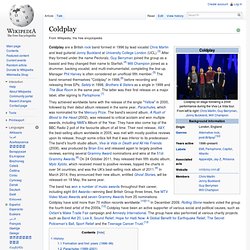 Coldplay have sold more than 70 million records worldwide.[10][11] In December 2009, Rolling Stone readers voted the group the fourth-best artist of the 2000s.[12] Coldplay have been an active supporter of various social and political causes, such as Oxfam's Make Trade Fair campaign and Amnesty International. The group have also performed at various charity projects such as Band Aid 20, Live 8, Sound Relief, Hope for Haiti Now: A Global Benefit for Earthquake Relief, The Secret Policeman's Ball, Sport Relief and the Teenage Cancer Trust.[13] History[edit] Formation and first years (1996–99)[edit] Parachutes (1999–2001)[edit] A Rush of Blood to the Head (2001–04)[edit] Live performances during their 2002 tour were noted for their use of strobe lighting.