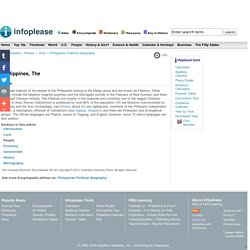 Other groups include the Negritos (negroid pygmies) and the Dumagats (similar to the Papuans of New Guinea), and there is a small Chinese minority. The Filipinos live mostly in the lowlands and constitute one of the largest Christian groups in Asia. Roman Catholicism is professed by over 80% of the population; 5% are Muslims (concentrated on Mindanao and the Sulu Archipelago; see Moros); about 2% are Aglipayans, members of the Philippine Independent Church, a nationalistic offshoot of Catholicism (see Aglipay, Gregorio); and there are Protestant and Evangelical groups. The official languages are Pilipino, based on Tagalog, and English; however, some 70 native languages are also spoken. 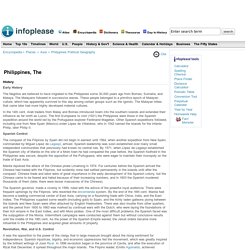 The Malayans followed in successive waves. These people belonged to a primitive epoch of Malayan culture, which has apparently survived to this day among certain groups such as the Igorots. The Malayan tribes that came later had more highly developed material cultures. History of Philippines. Early History: The Philippine archipelago was settled at least 30,000 years ago, when migrations from the Indonesian archipelago and elsewhere are believed to have occurred. 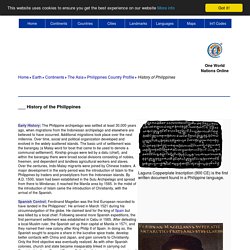 Additional migrations took place over the next millennia. Over time, social and political organization developed and evolved in the widely scattered islands. The basic unit of settlement was the barangay (a Malay word for boat that came to be used to denote a communal settlement). Kinship groups were led by a datu (chief), and within the barangay there were broad social divisions consisting of nobles, freemen, and dependent and landless agricultural workers and slaves. Over the centuries, Indo-Malay migrants were joined by Chinese traders. Spanish Control: Ferdinand Magellan was the first European recorded to have landed in the Philippines*. During the Seven Years’ War (1756–63), British East India Company forces captured Manila. Philippine History. Asian American History, Demographics, & Issues. This article is an edited chapter on the major historical events and contemporary characteristics of the Filipino American community, excerpted from The New Face of Asian Pacific America: Numbers, Diversity, and Change in the 21st Century, edited by Eric Lai and Dennis Arguelles in conjunction with AsianWeek Magazine and published by the UCLA Asian American Studies Center. 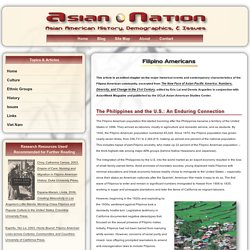 15 Memorable Facts About Filipino-American History You Should Know. Filipino Americans. Filipino immigration to the United States began after the U.S. acquired the Philippines in 1898 as a result of the Spanish-American War. 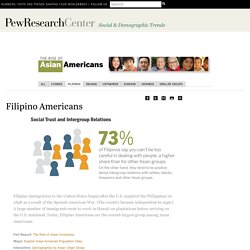 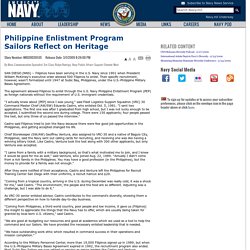 Navy since 1901 when President William McKinley's executive order allowed 500 Filipinos to enlist. Their specific recruitment, however, wasn't formalized until 1947 at Subic Bay, Philippines, under the U.S. Untitled. Background Citizenship Opportunities Within the Navy Rating Structure Recent Personnel Actions Filipinos Enlisted in the Navy Filipino Officer and Enlisted Distribution by Rank and Pay Grade Ratings Open to Philippine Nationals Memorandum for PERS-161 President William McKinley signed an executive order in 1901 allowing the Navy to enlist 500 Filipinos as part of the insular force. 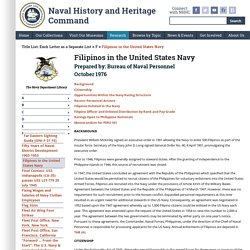 Secretary of the Navy John D. Long signed General Order No. 40, 8 April 1901, promulgating the executive order. Prior to 1946, Filipinos were generally assigned to steward duties.