N-G-R : Ancient Egyptian for God. Akhenaten; Amenhotep IV. Narmer; Aha, or Menes 1st Dynasty King; Ruler. Crown. Black Fez; A Master's Fez, and this is also a crown. July 4th, 1776; The Unanimous Declaration of the Thirteen United States of America, Amendment 1 of the US Constitution. Freedom of religion, speech, press; etc. Amendment 13; XIII of the US Constitution. This Amendment was adopted Dec. 18th, 1865.

Muhammad (SAW) honored by the Supreme Court... My Ring; a gift to me from ... . The Fez and the Qur'an was a gift to me from... . 5.lb Natural Quartz Rock; a base mineral from the Earth's crust that absorbs and transfers engery. Philo sophy/ Love of Wisdom, & The Study of the mind/ Psych ology. Al- Kareem; Al- Qur'an. The Arabic term, "Muqarrabin" signifies a special rank or position. Ref. Surah Al Hijr ayah 26. " Verily We created... ." Roots of Islam in Early America_p1. The Qara called Kufic script is the earliest ... .

Surah Imran; 3:84. Forbids the consumption of pork; swine. Man; Hu-Mans, were created to be Khalifah. Hebrew; Chaldee ( Aramaic) and Koine; Greek Key Word Study Bible. "Howbeit when he, the Spirit... ." The Gospel according to John 16:13. John 1:1 In the beginning was the word; ... . Christ is a Greek term used to express the.... Forbids the consumption of pork; swine.

Hebrew Terms: kacah: to conceal; hide ; do in secrecy. Ref. The Gospel according to Luke, ch. 17:21. The Second Epistle; gramma of Paul; Saul of Tarsus, Mersin of Southern Turkey, to Timothy. Apocrypha; The Hidden Knowledge. Baruch; ch 4: 1- 3. Torah; Instructions, teaching and/ or doctrine. 'LH. 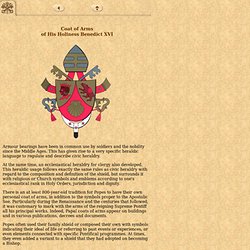 This has given rise to a very specific heraldic language to regulate and describe civic heraldry. At the same time, an ecclesiastical heraldry for clergy also developed. This heraldic usage follows exactly the same rules as civic heraldry with regard to the composition and definition of the shield, but surrounds it with religious or Church symbols and emblems according to one's ecclesiastical rank in Holy Orders, jurisdiction and dignity. There is an at least 800-year-old tradition for Popes to have their own personal coat of arms, in addition to the symbols proper to the Apostolic See. Popes often used their family shield or composed their own with symbols indicating their ideal of life or referring to past events or experiences, or even elements connected with specific Pontifical programmes. In each of the upper corners there is a "chape" in gold.

An original Coat of Arms for Sardinia. Moor Crest. The Habsburg Progenitor holding the family crest. Val Dubh King Kenneth. Rannsaich an Stòr-dàta Briathrachais Gàidhlig. The gaelic term Dub; Dubh = Black in color; skin hue. In the Dark Ages. Your front-page item (February 11) on the naming of Niger Val Dubh, a tenth-century Pictish king, as number 36 in a list of the UK's most famous black figures, might give careless readers the impression that a ''black'' Scottish leader in that period was an impossibility. 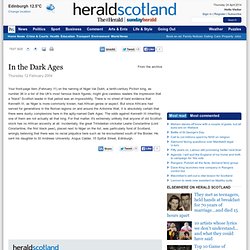 There is no shred of hard evidence that Kenneth III, as Niger is more commonly known, had African genes or aspect. But since Africans had served for generations in the Roman legions on and around the Antonine Wall, it is absolutely certain that there were dusky complexions here in the aptly-named Dark Ages. The odds against Kenneth III inheriting one of them are not actually all that long. For that matter, it's extremely unlikely that anyone of old Scottish stock has no African ancestry at all. 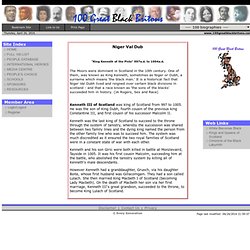