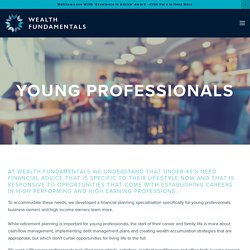 Your personal financial plan will be created just for you and your family’s goals for the future. Two major areas within our financial planning strategies are: (1) to help our clients review and strengthen the fundamentals of their current financial position and (2) once this has been done, we conduct regular reviews of the plan designed to assist you to continue your journey to creating financial independence. No. Financial Advice for Young Professionals – Wealth Fundamentals, Brisbane Australia — Wealth Fundamentals. SMSF Administration Made Simple. Professor Ian Ramsay. Harold Ford Professor of Commercial LawRedmond Barry Distinguished Professor Director of Studies, Commercial Law, Corporate Law for the Melbourne Law Masters Program Director, Centre for Corporate Law +61 3 83445332 | i.ramsay@unimelb.edu.au | Room 0733 Overview Ian Ramsay is the Harold Ford Professor of Commercial Law and Redmond Barry Distinguished Professor. 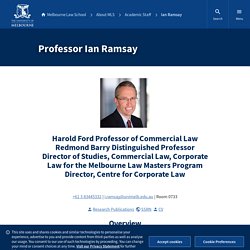 He is also Director of the Law School's Centre for Corporate Law. Ian practised law in New York and Sydney and is a member of the Corporations Law Committee of the Law Council of Australia. Positions Ian currently holds or has previously held include: Ian has published extensively on corporate law, corporate governance and financial regulation issues both internationally and in Australia.

In addition, he has published more than 250 research reports, book chapters and journal articles. Superannuation system must not punish the young. Accounting, Accountability & Performance - Australia's Retail Superannuation Fund Industry: Structure, Conduct and Performance (Business Collection) - Informit. Abstract: In this analysis of Australia's superannuation arrangements it is our conjecture that the structure and conduct of the retail superannuation industry in Australia directly impacts performance, resulting in the delivery of costly funds management products which add minimal value for investors over the long term. 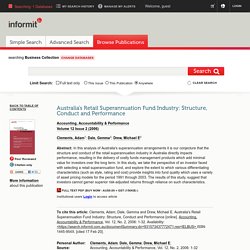 In this study, we take the perspective of an investor faced with selecting a retail superannuation fund, and explore the extent to which various differentiating characteristics (such as style, rating and cost) provide insights into fund quality which uses a variety of asset pricing models for the period 1991 through 2003. The results of this study, suggest that investors cannot garner superior risk-adjusted returns through reliance on such characteristics. Full Text PDF (Buy Now - AU$8.00 + GST (156KB) ) Institutional users Login to access article To cite this article: Clements, Adam; Dale, Gemma and Drew, Michael E.

Database: Business Collection. MUP delivers the first book to market on the banking royal commission — Melbourne University Publishing. The People vs The Banks (PB $34.99/EB $16.99, Melbourne University Press, 2 April 2019) reveals what happens when businesses put profit before people, reward bad behaviour and assume they are beyond the law. 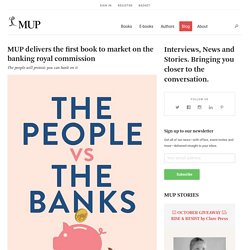 The day of reckoning for liars and thieves in pin-striped suits has arrived. With Justice Kenneth Hayne’s recommendations for criminal charges, the implications of the banking royal commission will rock Australian society. Acclaimed business journalist Michael Roddan, who covers banking, insurance, superannuation and financial services, reveals the complete story of one of the most important inquiries in Australian history.

SSRN id2905465. Employers should be able to make higher super contributions for female employees, Victorian Government argues. Updated yesterday at 7:52amWed 12 Feb 2020, 7:52am When Tammy Lashko, who is 18 weeks pregnant, goes on maternity leave later this year, she is confident that she will not be left financially worse off in the long term. 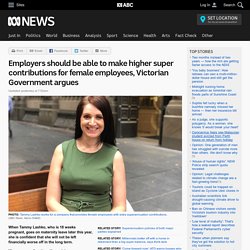 Key points: A Victorian Government submission to a national review argues companies should be allowed to make higher super contributions for female employeesThe submission also calls for mandatory employer super contributions to rise more quickly to 12 per cent and eventually to 15 per centThe Sex Discrimination Act would need to be changed to allow companies to make larger super payments for female employees Women generally retire with much less superannuation than their male counterparts — at least in part because they more often take time off work to have children. However, Ms Lashko works at financial services consultancy Rice Warner, one of the few companies that has tackled the issue. Fsrc volume 1 final report. 110 withheld supp. Every Australian owns shares through super. Here's how to make a start at ethical investing. ABC Search. Data Dumped: it's all bad news for the Australian economy. If Prime Minister Scott Morrison went to the election in May to beat potentially bad economic news, it was an extremely well-judged decision. Alan Austin reports. THE LATEST data dumps confirm the current administration is not only the worst economic manager in Australia’s post war history, if not all its history, but one of the two or three worst in the developed world. If Prime Minister Scott Morrison went to the election in May to beat potentially bad economic news, it was an extremely well-judged decision. Virtually all critical indicators of economic health have deteriorated substantially since the 2013 election.

That decline appears to have accelerated since the 2016 election. Economic growth ranking plummets Yesterday’s release of the quarterly national accounts confirms Australia is sliding further down the global economic growth rankings. Interest rates indictment Monday’s cut to interest rates by the Reserve Bank underscores the deterioration of the economy since 2013. Westpac slugged $9 million after employee gives superannuation advice that benefits him. 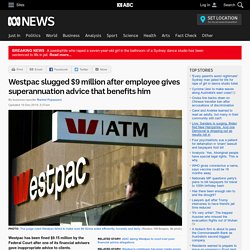