AR VR. REALIDAD AUMENTADA. The 20 Best Augmented-Reality Apps. Augmented reality has long sounded like a wild futuristic concept, but the technology has actually been around for years. 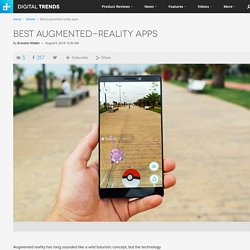 It becomes more robust and seamless with each passing decade, providing an astonishing means of superimposing computer-generated images atop a user’s view of reality, thus creating a composite view rooted in both real and virtual worlds. Although AR apps run the gamut, from interactive map overlays and virtual showrooms to massive multiplayer skirmishes, each piece of software hones in on smartphone GPS and camera functionality to create a more immersive experience. The available selection of augmented reality apps is diverse, encompassing both premium and freemium offerings from a variety of big and no-name developers, but sometimes choosing which apps are worth your smartphone or tablet’s precious memory is tougher than using the apps themselves. La Rambla virtual y aumentada. El pasado curso (2014-2015) comenzamos un proyecto de Aprendizaje-Servicio que llamamos “La Rambla Aumentada“. 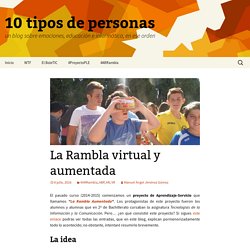 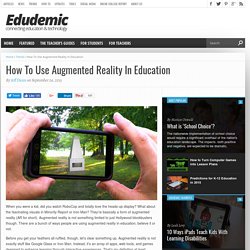 What about the fascinating visuals in Minority Report or Iron Man? They’re basically a form of augmented reality (AR for short). Augmented reality is not something limited to just Hollywood blockbusters though. There are a bunch of ways people are using augmented reality in education, believe it or not. Before you get your feathers all ruffled, though, let’s clear something up.

In an effort to shed some light on the current tools and teachers using AR, I thought it might be useful to assemble a list of what we’re seeing these days. In any case, here are just a handful of interesting AR use cases that you should check out. Project Glass The most famous AR project is being, of course, led by the folks at Google. The Augmented Future Of eLearning: Augmented Reality In eLearning - eLearning Industry. In this article, you are going to witness the first iteration of a new type of head mounted display that is going to change the way we see the world. 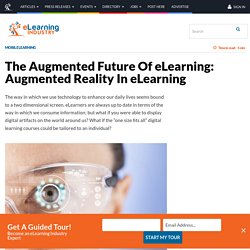 It will fundamentally change the way in which we learn about new subjects, and how we apply that knowledge in our everyday lives. The Microsoft HoloLens is the first product of its kind to change the environment around you. This technology is about to radically change the way in which you learn, and will hopefully revolutionize your perspective in regards to how you examine the world. How to Transform Your Classroom With Augmented Reality. 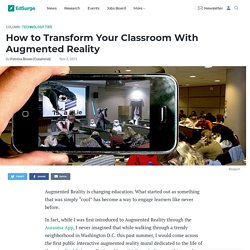 What started out as something that was simply “cool” has become a way to engage learners like never before. In fact, while I was first introduced to Augmented Reality through the Aurasma App, I never imagined that while walking through a trendy neighborhood in Washington D.C. this past summer, I would come across the first public interactive augmented reality mural dedicated to the life of the actor Paul Robeson. Designed by artist Corey L. Stowers, this mural allows viewers to scan and thus trigger images of his artwork with their mobile devices, accessing historical videos and original content that depict the life of the great athlete, performer, and civil rights activist. 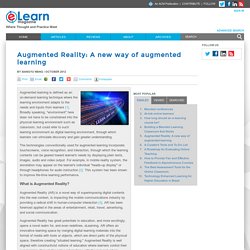 For example, in mobile reality system, the annotation may appear on the learner's individual "heads-up display" or through headphones for audio instruction [2]. This system has been shown to improve life-time learning performance. Realidad Aumentada/ Virtual. Augmented and Virtual Reality. Use these resources to bring augmented reality to your classroom. The use of augmented reality in classrooms is growing, as more educators discover this affordable option for bringing a new dimension to the printed page — and to physical objects — in a way that can engage and motivate learners. 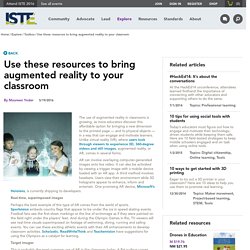 Unlike virtual reality (VR), where users look through viewers to experience 3D, 360-degree videos and still images, augmented reality, or AR, comes in several forms. AR can involve overlaying computer-generated images onto live video. It can also be activated by viewing a trigger image with a mobile device loaded with an AR app. A third method involves headsets. Users view their environment while 3D holograms appear to enhance, inform and entertain. Real-time, superimposed images Perhaps the best example of this type of AR comes from the world of sports. Target images This is probably the most common use of AR in the classroom today. Books Carlton Books has published a series of titles enhanced with augmented reality images. Augmented Reality.