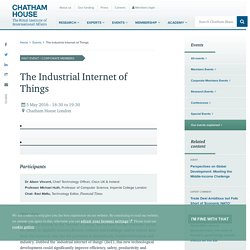 Four key takeaways from Dell’s industrial IoT play - Dell IoT Gateway. Industry observers have often been critical about the hype built around the Internet of Things (IoT) bandwagon; some even call the notion of IoT impractical for its lack of foresight and need to “speed to market.” 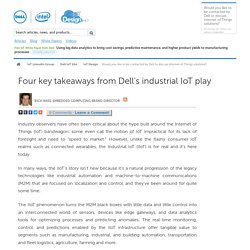 However, unlike the flashy consumer IoT realms such as connected wearables, the Industrial IoT (IIoT) is for real and it’s here today. In many ways, the IIoT’s story isn’t new because it’s a natural progression of the legacy technologies like industrial automation and machine-to-machine communications (M2M) that are focused on localization and control, and they’ve been around for quite some time. The IIoT phenomenon turns the M2M black boxes with little data and little control into an interconnected world of sensors, devices like edge gateways, and data analytics tools for optimizing processes and predicting anomalies. 1. IIoT is an evolution of the existing industrial automation systems. 2. Recommended for you dell.iotdesign.embedded-computing.com. 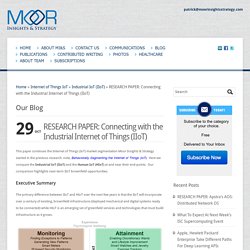 Here we compare the Industrial IoT (IIoT) and the Human IoT (HIoT) at and near their end-points. Our comparison highlights near-term IIoT brownfield opportunities. Executive Summary. IERC-European Research Cluster on the Internet of Things. Internet of Things, Services and People - What is new. Industrial Internet of Things - CloudPlugs. The IIoT Connector™ is a dual purpose product designed to integrate standard Modbus devices into the CloudPlugs IoT platform, while also providing local connectivity to a SCADA or Building Management System. 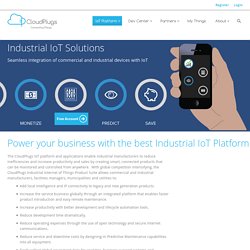 It is designed for environments in which the field devices and the SCADA or BMS system are in the same facility, but is desired to have the device data available in the cloud for access by other analytics, business or operational support applications. A single IIoT Connector™ can simultaneously manage several hundred Modbus devices, and sets up a secure bi-directional connection over the Internet with the CloudPlugs IoT platform, eliminating the need for virtual private networks, firewalls and complex network infrastructure in the field. Device data and events are sent securely to the platform and control commands are received and executed by the devices. IIoT Connectors™ can be easily configured to connect seamlessly as a Modbus slave device with any local SCADA or BMS system.

IoT content from Electronic Design. Is the Internet of Things (IoT) the same as Industrial IoT (IIoT)? 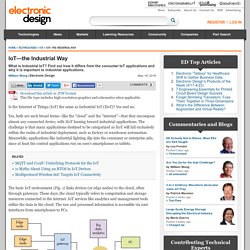 Yes and no. Yes, both are such broad terms—like the “cloud” and the “internet”—that they encompass almost any connected device, with IIoT leaning toward industrial applications. The challenge is that many applications destined to be categorized as IIoT will fall exclusively within the realm of industrial deployment, such as factory or warehouse automation. 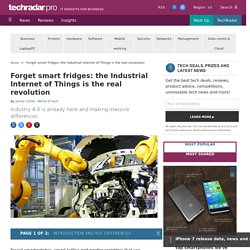 However, the Industrial Internet of Things – or IIoT – is real, and it's changing the industrial world right now. What is the Industrial Internet of Things (IIoT)? The phrase was a term coined by GE a few years ago as an update to machine-to-machine (M2M) technologies, while the German government calls it Industry 4.0, but what does it mean? "It's not new, but the vernacular has evolved," says Mike Troiano, VP, Industrial Internet of Things Solutions at AT&T, which presently has 18.5 million machines connected to the internet. IoT Industry Solutions. Training Certificate Program from Rockwell Automation. Increasing Demand for Network Convergence Skills As organizations recognize the value of converging the industrial plant floor with their IT infrastructure, the gap in the skills that are required to manage such a convergence is becoming apparent. 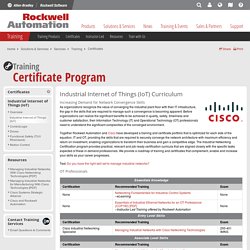 Before organizations can realize the significant benefits to be achieved in quality, safety, timeliness and customer satisfaction, their Information Technology (IT) and Operational Technology (OT) professionals need to understand the significant complexities of the converged environment. Together Rockwell Automation and Cisco have developed a training and certificate portfolio that is optimized for each side of the equation, IT and OT, providing the skills that are required to securely converge the network architecture with maximum efficiency and return on investment, enabling organizations to transform their business and gain a competitive edge. Test: Do you have the right skill set to manage industrial networks? OT Professionals. Training Certificate Program from Rockwell Automation. Industrial Internet of Things by Honeywell. Industrial Internet Of Things - Motorola Solutions. WEFUSA IndustrialInternet Report2015. Untitled. What is Industrial Internet of Things (IIoT)

Internet of Things More data and information is being captured from systems, machines and devices and made available to IT systems. 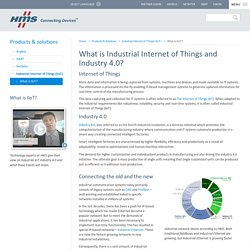 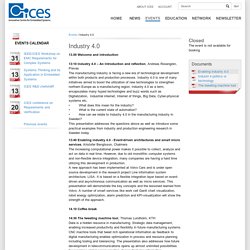 Industry 4.0 is one of many initiatives aimed to boost the utilization of new technologies to strengthen northern Europe as a manufacturing region. Industry 4.0 as a term, encapsulates many hyped technologies and buzz words such as Digitalization, Industrial internet, Internet of things, Big Data, Cyber-physical systems etc. . • What does this mean for the industry? 13:40 Enabling industry 4.0 - Event-driven architectures and smart micro services, Kristofer Bengtsson, Chalmers The increasing computational power makes it possible to collect, analyze and act on data in real time. Speakers - Industry of Things World 2016. Robert Katz, a global cyber-innovator, business-builder, and real rocket-scientist, pioneered many of the early game-changing connectivity capabilities we find commonplace today. 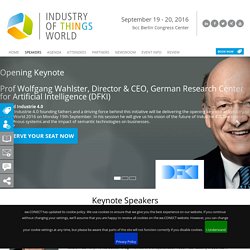 These include his ground-breaking design and deployment of world’s first systems for the Internet of Things (IoT), GPS tracking, wireless messaging, Internet email, connected cars, and drone-based sensor deployment. Later, he went on to lead numerous cyber, national, and homeland security-related C5ISR initiatives for the Pentagon, and its civilian, industry, laboratory, and academic partners.

“Application Center Industry 4.0”: a simulation platform for new factory models and a learning factory at the same time. Photo: Karla Fritze. “Up to now, a workpiece in a factory has been ignorant. It does not know what it is, where it comes from, and whether it is important,” Norbert Gronau says. The Fourth Industrial Revolution 173 INT. Industry%204.0%20 %20full. Industry: Features: News & events: Linköping University. In the production facilities of the future, the products will manufacture themselves. Professor Wolfgang Wahlster, artificial intelligence researcher and honorary doctor at Linköping University, has a clear vision of the fourth industrial revolution, Industry 4.0.

We are right in the middle of it. The fourth industrial revolution is already upon us, maintains Prof Wolfgang Wahlster, CEO of DFKI, the German Research Center for Artificial Intelligence, and honorary doctor at LiU since 1998. He is one of six invited speakers at IDA, LiU’s Department of Computer and Information Science, as it celebrates its 30th anniversary with a future-focused seminar series. But what Prof Wahlster shows us is much closer to the present day. Using technologies such as artificial intelligence, internet protocols, QR codes and RFID tags, sensors and positioning systems, it is now possible for a product to manufacture itself.

He gives the following example to explain how such a facility works. Industry 4.0: Manufacturing in the United States. Bridges vol. 42, December 2014 / Feature By Thomas Kurfuss Industry 4.0 stems from the realization that a 4th industrial revolution is upon us. The 1st industrial revolution was driven by the advent of steam engines being used to power production facilities.

This provided a more flexible and powerful energy source for machinery not situated near a natural source of power such as a river. The 2nd industrial revolution was driven by the assembly line, exemplified by Henry Ford a century ago. Untitled. Enabling the 4th industrial revolution - Enabling the 4th industrial revolution - "industrie 4.0" or the "internet of things"? Lastest blog from Professor Andy Neely. I've been struck recently by the range of people talking about new digital and data developments in manufacturing. Of particular interest has been the apparent explosion of discussion about industrie 4.0 (which is extremely popular in Germany), internet plus (which is being pushed by China) and the industrial internet (being promoted by GE among others). Managers, consultants, policy makers and academics are all getting very excited about the potential of connected devices. "Industrie 4.0" dossier in HSG Focus.

A basic knowledge in embedded systems design, in microcontrollers programming, in signal processing and in communication concepts is required. The course will be given in English. Overview Technological advances in miniaturized, ultra-low power embedded systems, in communication protocols and in data mining techniques are leading to disruptive innovations.

New Internet of Things research hub announced. The Value Of Partnership In Industrial Internet Of Things.