For a healthy brain, don't let the trash pile up. Public release date: 21-Jul-2013 [ Print | E-mail Share ] [ Close Window ] Contact: Barbara McMakinnindspressteam@ninds.nih.gov 301-496-5751NIH/National Institute of Neurological Disorders and Stroke Recycling is not only good for the environment, it's good for the brain. 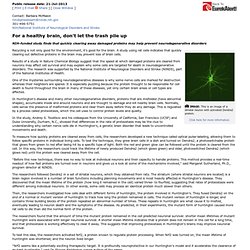 A study using rat cells indicates that quickly clearing out defective proteins in the brain may prevent loss of brain cells. Results of a study in Nature Chemical Biology suggest that the speed at which damaged proteins are cleared from neurons may affect cell survival and may explain why some cells are targeted for death in neurodegenerative disorders. One of the mysteries surrounding neurodegenerative diseases is why some nerve cells are marked for destruction whereas their neighbors are spared. In Huntington's disease and many other neurodegenerative disorders, proteins that are misfolded (have abnormal shapes), accumulate inside and around neurons and are thought to damage and kill nearby brain cells. Beyond the brain: vascular changes in the neck may play role in Alzheimer’s. Buffalo, N.Y. – Studies on Alzheimer’s disease and other forms of dementia have long focused on what’s happening inside the brain. 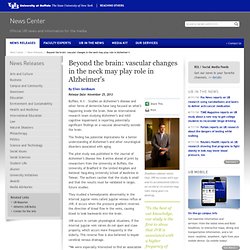 Now an international research team studying Alzheimer’s and mild cognitive impairment is reporting potentially significant findings on a vascular abnormality outside the brain. The finding has potential implications for a better understanding of Alzheimer’s and other neurological disorders associated with aging. The pilot study was published in the Journal of Alzheimer’s Disease Nov. 8 online ahead of print by researchers from the University at Buffalo, the University of Bradford in the United Kingdom and National Yang-Ming University School of Medicine in Taiwan. The authors caution that the study is small and that the results must be validated in larger, future studies. Antidepressant may slow Alzheimer’s disease. A commonly prescribed antidepressant can reduce production of the main ingredient in Alzheimer’s brain plaques, according to new research at Washington University School of Medicine in St. 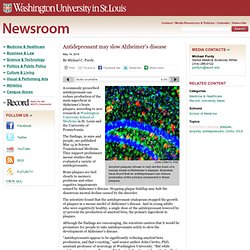 Louis and the University of Pennsylvania. The findings, in mice and people, are published May 14 in Science Translational Medicine. They support preliminary mouse studies that evaluated a variety of antidepressants. The Ultimate Alzheimer’s-Fighting Diet. Can you really prevent Alzheimer’s disease by eating certain foods? 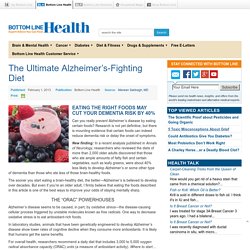 Research is not yet definitive, but there is mounting evidence that certain foods can indeed reduce dementia risk or delay the onset of symptoms. New finding: In a recent analysis published in Annals of Neurology, researchers who reviewed the diets of more than 2,000 older adults discovered that those who ate ample amounts of fatty fish and certain vegetables, such as leafy greens, were about 40% less likely to develop Alzheimer’s or some other type of dementia than those who ate less of those brain-healthy foods. The sooner you start eating a brain-healthy diet, the better—Alzheimer’s is believed to develop over decades. But even if you’re an older adult, I firmly believe that eating the foods described in this article is one of the best ways to improve your odds of staying mentally sharp. Existing drug riluzole may prevent foggy ‘old age’ brain. When researchers looked at certain neurons (similar to the one shown on top) in rats treated with riluzole, they found an important change in one brain region, the hippocampus: more clusters of spines, receiving connections that extend from the branches of a neuron (bottom) (credit: John H. 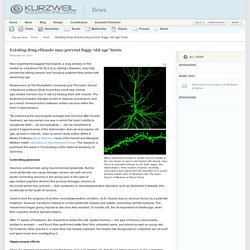 The treatment prompted changes known to improve connections, and as a result, communication between certain neurons within the brain’s hippocampus. Controlling glutamate Neurons communicate using neurochemical glutamate. Sensors let Alzheimer's patients stay at home, safely. Technology like this pillbox sensor from Lively can help caretakers monitor people with Alzheimer's and dementia from afar. 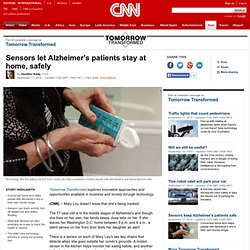 Connected home tech helps people with Alzheimer's live in their own homes longerSensors can track activity, turn off appliances and detect floodingWearable devices are also emerging as a way to track the health of seniorsThe elder care technology industry is young but growing fast Tomorrow Transformed explores innovative approaches and opportunities available in business and society through technology. Memory Champ, Nelson Dellis, Inspired by Grandmother's Struggle.

In a little more than a minute, Nelson Dellis can memorize the exact order of a shuffled deck of playing cards and recite it back to you, flawlessly. 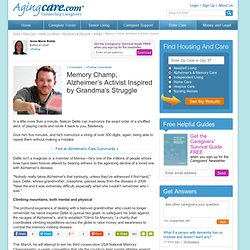 Give him five minutes, and he'll memorize a string of over 300 digits, again, being able to repeat them without making a mistake. Find an Alzheimer's Care Community » Dellis isn't a magician or a member of Mensa—he's one of the millions of people whose lives have been forever altered by bearing witness to the agonizing decline of a loved one with Alzheimer's disease. "Nobody really takes Alzheimer's that seriously, unless they've witnessed it first-hand," says Dellis, whose grandmother, Josephine, passed away from the disease in 2009.

"Near the end it was extremely difficult, especially when she couldn't remember who I was. " Climbing mountains, both mental and physical Dellis' efforts have led him to lofty heights. Dellis has also climbed some of the highest peaks in the world, including Mt. "I've always loved the mountains. Scientists Uncover Special Memory Trick for Seniors. We’ve all heard the “Those who can’t do, teach,” maxim. 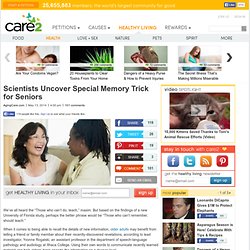 But based on the findings of a new University of Florida study, perhaps the better phrase would be “Those who can’t remember, should teach.” When it comes to being able to recall the details of new information, older adults may benefit from telling a friend or family member about their recently-discovered revelations, according to lead investigator, Yvonne Rogalski, an assistant professor in the department of speech-language pathology and audiology at Ithaca College. 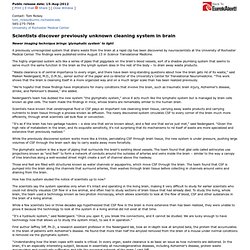 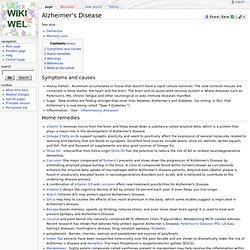 See also : Symptoms and causes Heavy metals : Aluminum accumulates in tissue that doesn't have a rapid cellular turnover. The slow turnover tissues are contained in bone matter, the heart and the brain. The brain and its associated nervous system is where diseases such as Parkinson's, MS, chronic fatigue and other neurological or auto-immune diseases manifest.

Home remedies Warnings References Medical Disclaimer This information is not meant to be substituted for medical advice. Psoriasis drug 'slows dementia' mice study suggests. 25 November 2012Last updated at 18:05 ET Psoriasis is a skin condition when new skin is produced too rapidly - forming red marks Drugs used to calm inflammation in psoriasis may also help to combat the effects of Alzheimer's disease, a study on mice suggests. Tests showed the short-term memory of the animals improved when given similar drugs, according to a study published in the journal Nature Medicine. The build-up of proteins thought to destroy brain cells was also reduced. Alzheimer's & Dementia: Health24. Alzheimer's disease. Heimer's Association. Alzheimer's Disease Education and Referral Center of the National Institute on Aging. Dutch Clinical Study Shows Marijuana And Video Games Can Delay Alzheimer’s.

Brain-derived neurotrophic factor. Brain-derived neurotrophic factor, also known as BDNF, is a secreted protein[2] that, in humans, is encoded by the BDNF gene.[3][4] BDNF is a member of the "neurotrophin" family of growth factors, which are related to the canonical "nerve growth factor", NGF. Neurotrophic factors are found in the brain and the periphery. Function[edit] BDNF acts on certain neurons of the central nervous system and the peripheral nervous system, helping to support the survival of existing neurons, and encourage the growth and differentiation of new neurons and synapses.[5][6] In the brain, it is active in the hippocampus, cerebral cortex, and basal forebrain—areas vital to learning, memory, and higher thinking.[7] BDNF itself is important for long-term memory.[8] BDNF was the second neurotrophic factor to be characterized after nerve growth factor (NGF).

Tissue distribution[edit] Counterintuitively, BDNF is actually found in a range of tissue and cell types, not just in the brain. Alzheimer's Disease. What is Alzheimer's disease?