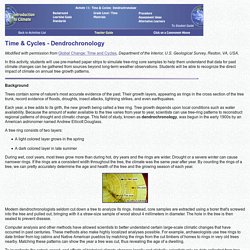 Geological Survey, Reston, VA, USA. In this activity, students will use pre-marked paper strips to simulate tree-ring core samples to help them understand that data for past climate changes can be gathered from sources beyond long-term weather observations. Students will be able to recognize the direct impact of climate on annual tree growth patterns.

Background Trees contain some of nature's most accurate evidence of the past. Each year, a tree adds to its girth, the new growth being called a tree ring. A tree ring consists of two layers: A light colored layer grows in the spring A dark colored layer in late summer During wet, cool years, most trees grow more than during hot, dry years and the rings are wider. Modern dendrochronologists seldom cut down a tree to analyze its rings. In this activity, students will use pre-marked paper strips to simulate tree-ring core samples. Learning Goals. Richard III - The Archaeological Dig. Mapping the Past. Activity 1. 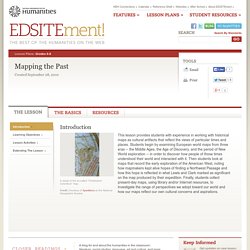 Discover information about an historical map Begin by providing each student with a copy of the Map Analysis Worksheet available through EDSITEment at the Digital Classroom website of the National Archives and Records Administration. At the website's homepage, click "Document Analysis Worksheets" in the blue sidebar and click Map. Discuss with students how they can use the worksheet to discover various kinds of information in an historical map, including facts about the map itself (date, creator, purpose, etc.) and facts about the past.

Explain that in this lesson students will use the worksheet to examine a variety of historical maps, first comparing European world maps from different eras, then tracing the process of mapping the American West. Activity 2. Egypt's Pyramids: Monuments with a Message. Activity 1. 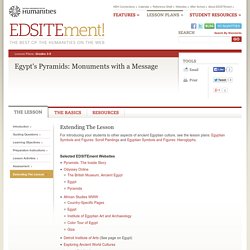 Messages in Stone Now that the students know where the pyramids are and how big they are, ask them what these great structures tell us about the ancient Egyptians by observing and analyzing the following tomb artifacts from University of Memphis Museum Detroit Institute of Arts Odyssey Online Remind the students that the ancient Egyptians built pyramids as tombs for their pharaohs.

See examples of pharaohs and court dynastic figures available through the EDSITEment-reviewed website, Exploring Ancient World Cultures, from the Cleveland Museum of Art: The pyramids contained rooms that were filled with expensive objects that were buried with the pharaohs—furniture, jewelry, games, even food! Cave Art: Discovering Prehistoric Humans through Pictures. 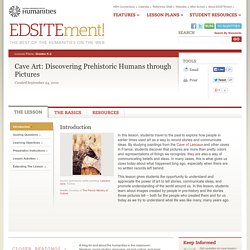 Introduction to the Era of Cave Painting Begin by asking students to think about where they have seen pictures that communicate specific information to people, such as directions. Guide the discussion to include international symbols frequently seen, such as: no smoking, handicapped, man, woman, no parking, airport, etc. Ask students to think about why these pictures work well (e.g., people who can't read the language can still understand what is being communicated). You can also invite students to think about how they might tell someone who isn't here about something important, if the student can't write and the person they want to communicate with doesn't have a telephone or email. 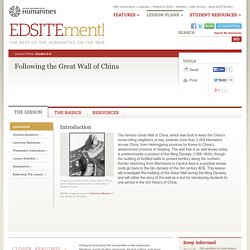 It is made up of numerous construction projects that were begun at different times, during different dynasties and in different locations. Most of the early sections of the construction fell into disrepair, or had even disappeared entirely, by the fourteenth century when the Ming Dynasty came to power. The wall as it known today is predominantly a product of the Ming Dynasty, which both repaired and rebuilt older sections, and expanded the reach of the structure. The Ming Dynasty structure can be seen from Hebei province to Gansu province. Beyond Gansu province the wall becomes a series of watchtowers that stretch into Xinjiang province and the Taklamakan desert. The initial fortifications and the subsequent wall were both constructed to slow the advance of invading forces that depended on cavalry—mounted horsemen expert at using the bow and arrow. Note: There are two transliteration systems for Mandarin Chinese.