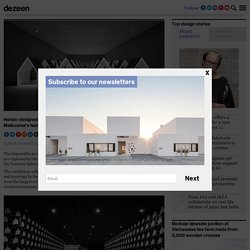 The exhibition, called Between Two Worlds, includes 157 prints and drawings by Escher, made between 1916 and 1969, taken from the largest collection of the artist's work, at the Gemeentemuseum in The Hague. The Japanese studio has designed an immersive monochrome design for the exhibition that draws on the artist's work by playing with themes of geometry and space. The studio took the simple shape of a house as the basis of its designs for the project, adapting the form into different dimensions and scales. The house was chosen as it is a symbol that represents space. The house motif has practical and conceptual applications, with variations on the shape forming seating, providing a context for display and directing visitors. In the next room black metal pipes holding Escher works appear to float in space. Samsung creates Resonance installation at Milan design week 2019. Dezeen promotion: Samsung has created an interactive installation for Milan design week that allows visitors to create art by breathing, talking and moving. 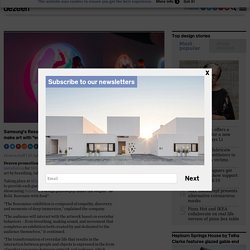 Taking place at Milan design week 2019, Resonance is intended to provide each guest with a unique experience, while showcasing Samsung's design philosophy under the slogan: "Be Bold. Resonate with Soul". "The Resonance exhibition is composed of empathy, discovery, and moments of deep immersion," explained the company. "The audience will interact with the artwork based on everyday behaviors – from breathing, making sound, and movement that completes an exhibition both created by and dedicated to the audience themselves," it continued.

Spaceworkers commemorates Portuguese philosopher with installation. Architecture studio Spaceworkers has created an arched exhibition space in an old Portuguese church, to celebrate the life and legacy of philosopher and scholar Damião de Gois. 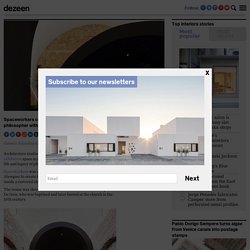 Spaceworkers was commissioned by the Municipality of Alenquer to create the mini museum, as a permanent fixture inside a restored church in Alenquer, central Portugal. The venue was chosen because of its historical relationship with De Gois, who was baptised and later buried at the church in the 16th century. "Intervening in an existing building is in itself a good challenge. But when we have added centuries of history, the challenge is even greater," said the studio, which is led by architects Henrique Marques and Rui Dinis. Jac Studios creates delicate glass exhibition in Tadao Ando's Genius Loci. Jac Studios has designed minimal glass display cases for an exhibition in a Tadao Ando-designed museum – a project that has just won top prize at the Inside awards. 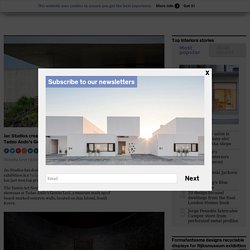 The Yumin Art Nouveau Collection exhibition is a permanent showcase at Tadao Ando's Genius Loci, a museum made up of board-marked concrete walls, located on Jeju Island, South Korea. This exhibition features art-nouveau glass crafted between 1870 and 1940 by by French artist Émile Galle and his contemporaries. The project was named Interior of the Year at the Inside interior design awards, which took place in Amsterdam last week. Copenhagen-based Jac Studios chose to contrast the building's austere and heavy walls with transparent glass surfaces and volumes. AMO create "open-ended" display system for Amsterdam's Stedelijk Museum. OMA's research and design studio AMO has created a display system made up of 43 slim free-standing steel walls for the permanent collection of Amsterdam's Stedelijk Museum. 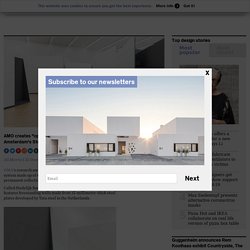 Called Stedelijk Base, the light and flexible display system features freestanding walls made from 15-millimetre-thick steel plates developed by Tata steel in the Netherlands. The laser-cut pieces are then coupled together to create solid and stable triangular structures. Lina Bo Bardi’s "radical" glass easels revived for exhibition. Exhibit Design · A collection curated by Divisare. Help us swim against the tide. 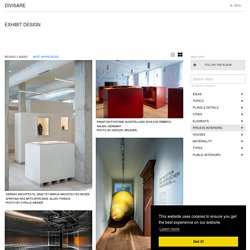 Join us in taking a stand against the short attention architecture media. Divisare is the result of an effort of selection and classification of contemporary architecture conducted for over twenty years. Patient work, done with care, image after image, project after project, to offer you the ideal tool with which to organize your knowledge of contemporary architecture. Instead of a quick, distracted web, we want a slow, attentive one. Instead of hastily perused information, we prefer knowledge calmly absorbed. Divisare subscription is free for teachers & students No Ads. Find out more about why divisare exists, what guide us and what our readers say about us. FREAKS freearchitects line the Louvre with shiny plastic. Parisian studio FREAKS freearchitects has covered a series of elaborately decorated galleries inside the Palais du Louvre with shiny plastic for an exhibition that brings together historic and contemporary design (+ slideshow). 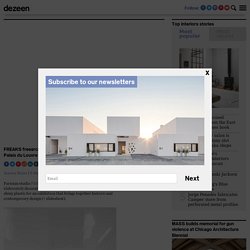 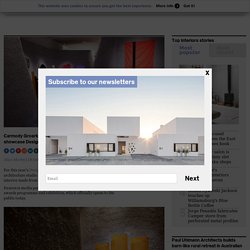 Dezeen is media partner for the Beazley Designs of the Year awards programme and exhibition, which officially opens to the public today. Set on the basement level of the Design Museum in Kensington, the exhibition is organised into themed sections, displaying each of the 62 nominations. London firm Carmody Groarke has created grotto-like spaces to frame each section, offering a stark contrast to the simple plinths and units of last year's exhibition. The monolithic structure is formed of a timber frame that has been sprayed with a recycled paper pulp material named Soundcel, usually used in construction to provide insulation. Nominated projects, such as a flag for refugees and IKEA's snap-together furniture, are either mounted upon the structure or placed within niches. Photography is by Luke Hayes. Photography is by Luke Hayes. Sheets of paper form a floating backdrop to design exhibition in Taiwan.

B+P Architects has used swooping swathes of paper to form a temporary exhibition design in a former military building in Taiwan. 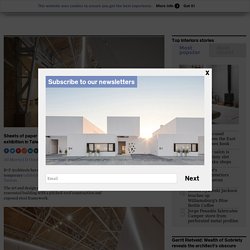 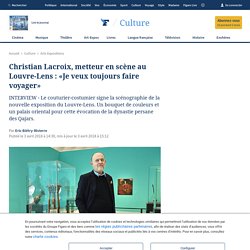