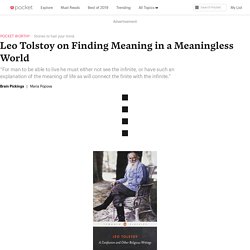 With his greatest works behind him, he found his sense of purpose dwindling as his celebrity and public acclaim billowed, sinking into a state of deep depression and melancholia despite having a large estate, good health for his age, a wife who had born him fourteen children, and the promise of eternal literary fame. On the brink of suicide, he made one last grasp at light amidst the darkness of his existence, turning to the world’s great religious and philosophical traditions for answers to the age-old question regarding the meaning of life. He likens the progression of his depression to a serious physical illness — a parallel modern science is rendering increasingly appropriate. Tolstoy writes: Then occurred what happens to everyone sickening with a mortal internal disease.

He then turned to philosophy, but found himself equally disillusioned: Desert Solitaire: An Uncommonly Beautiful Love Letter to Solitude and the Spiritual Rewards of Getting Lost. One of Antoine de Saint-Exupéry’s original watercolors for The Little Prince. 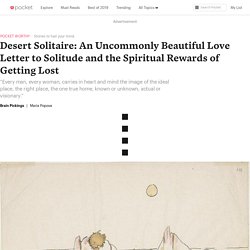 Click here for more. “As the desert offers no tangible riches, as there is nothing to see or hear in the desert,” Antoine de Saint-Exupéry wrote in his exquisite memoir of what the Sahara Desert taught him about the meaning of life, “one is compelled to acknowledge, since the inner life, far from falling asleep, is fortified, that man is first animated by invisible solicitations.” No one captures this invisible animation of inner life more bewitchingly than Edward Abbey in Desert Solitaire (public library) — a miraculously beautiful book, originally published in 1968, which I discovered through a passing mention by the wonderful Cheryl Strayed.

A Life of One’s Own. Art by Jean-Pierre Weill from ‘The Well of Being.’ 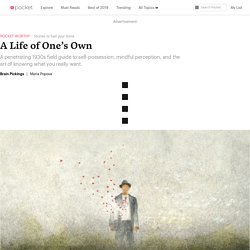 “One must know what one wants to be,” the eighteenth-century French mathematician Émilie du Châtelet wrote in weighing the nature of genius. “In the latter endeavors irresolution produces false steps, and in the life of the mind confused ideas.” And yet that inner knowing is the work of a lifetime, for our confusions are ample and our missteps constant amid a world that is constantly telling us who we are and who we ought to be — a world which, in the sobering words of E.E. Cummings, “is doing its best, night and day, to make you everybody else.” Try as we might not to be blinded by society’s prescriptions for happiness, we are still social creatures porous to the values of our peers — creatures surprisingly and often maddeningly myopic about the things we believe furnish our completeness as human beings, habitually aspiring to the wrong things for the wrong reasons. 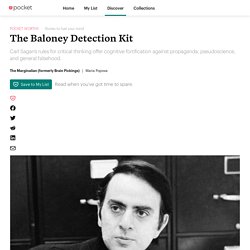 But above all, he endures as our era’s greatest patron saint of reason and critical thinking, a master of the vital balance between skepticism and openness. In The Demon-Haunted World: Science as a Candle in the Dark (public library) — the same indispensable volume that gave us Sagan’s timeless meditation on science and spirituality, published mere months before his death in 1996 — Sagan shares his secret to upholding the rites of reason, even in the face of society’s most shameless untruths and outrageous propaganda. Through their training, scientists are equipped with what Sagan calls a “baloney detection kit” — a set of cognitive tools and techniques that fortify the mind against penetration by falsehoods: The kit is brought out as a matter of course whenever new ideas are offered for consideration.

Nietzsche on Truth, Lies, the Power and Peril of Metaphor, and How We Use Language to Reveal and Conceal Reality. Friedrich Nietzsche. 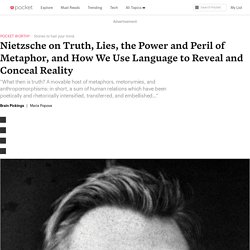 “The need of reason is not inspired by the quest for truth but by the quest for meaning,” Hannah Arendt wrote in her incisive meditation on the vital difference between thinking and knowing. Ursula K. Le Guin on Suffering and Getting to the Other Side of Pain. Simone Weil considered it the highest existential discipline to “make use of the sufferings that chance inflicts upon us.” 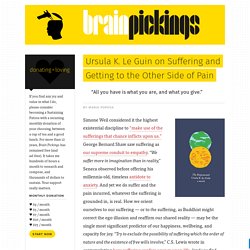 George Bernard Shaw saw suffering as our supreme conduit to empathy. “We suffer more in imagination than in reality,” Seneca observed before offering his millennia-old, timeless antidote to anxiety. The Universe in Verse. The Jazz of Physics: Cosmologist and Saxophonist Stephon Alexander on Decoding the Song of the Universe. How to Change Your Mind: Michael Pollan on How the Science of Psychedelics Illuminates Consciousness, Mortality, Addiction, Depression, and Transcendence. Seneca on Gratitude and What It Means to Be a Generous Human Being. Nietzsche on Truth, Lies, the Power and Peril of Metaphor, and How We Use Language to Reveal and Conceal Reality. The World’s Most Lyrical Footnote: Physicist Richard Feynman on the Life-Expanding Common Ground Between the Scientific and the Poetic Worldviews. D.H. Lawrence on the Antidote to the Malady of Materialism. The Courage to Be Yourself: E.E. Cummings on Art, Life, and Being Unafraid to Feel. Outlook.com - Microsoft free personal email.

Brain Pickings – An inventory of the meaningful life. Albert Camus on the Three Antidotes to the Absurdity of Life. Albert Einstein on the Interconnectedness of Our Fates and Our Mightiest Counterforce Against Injustice. Seneca on Grief and the Key to Resilience in the Face of Loss: An Extraordinary Letter to His Mother. Nina Simone on Time. “If our heart were large enough to love life in all its detail, we would see that every instant is at once a giver and a plunderer,” wrote the French philosopher Gaston Bachelard as he contemplated our paradoxical experience of time in the early 1930s just as Einstein, Gödel, and the rise of relativity had begun revolutionizing our understanding of time. 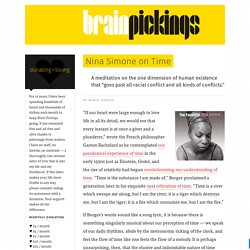 “Time is the substance I am made of,” Borges proclaimed a generation later in his exquisite 1944 refutation of time. “Time is a river which sweeps me along, but I am the river; it is a tiger which destroys me, but I am the tiger; it is a fire which consumes me, but I am the fire.” Kierkegaard on Boredom, Why Cat Listicles Fail to Answer the Soul’s Cry, and the Only True Cure for Existential Emptiness. Search Results for “arendt” “The possibilities that exist between two people, or among a group of people,” Adrienne Rich wrote in her beautiful 1975 speech on lying and what truth really means, “are a kind of alchemy. 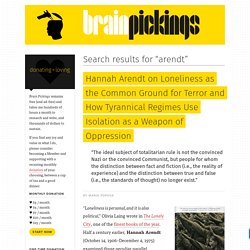 They are the most interesting thing in life. The liar is someone who keeps losing sight of these possibilities.” Nowhere is this liar’s loss of perspective more damaging to public life, human possibility, and our collective progress than in politics, where complex social, cultural, economic, and psychological forces conspire to make the assault on truth traumatic on a towering scale. Out of the particular treachery the Pentagon Papers revealed, Arendt wrests a poignant meditation on the betrayal we feel at every revelation that our political leaders — those we have elected to be our civil servants — have deceived and disappointed us.

Truthfulness has never been counted among the political virtues, and lies have always been regarded as justifiable tools in political dealings.