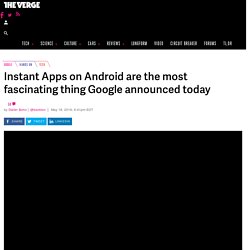 The basic idea is simple: when you click on a link, if that link has an associated Instant App at the URL you get a tiny version of that app instead of the website. Input And Output Aliases Can Be Namespaced In Angular 2 Beta 14. Yesterday, I stumbled upon the fact that input and output bindings could be namespaced in Angular 2 Beta 14. 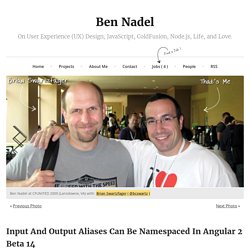 In that case, both the calling context and the component meta-data had to agree upon the namespace. Today, as a quick follow-up, I wanted to see if input and output aliases could be namespaced as well. This would allow the calling context to use "normal" binding properties and leave all the namespacing up to the component itself. Run this demo in my JavaScript Demos project on GitHub. In this experiment, I'm going to take the same demo from yesterday and simply move all notions of the namespace into the component itself. OpenAgenda. The secrets to LinkedIn's open source success. Open source is the gift that keeps on giving ... unless it destroys your business first. 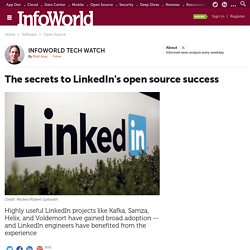 As many an open source vendor can tell you, it's a slog peddling free ones and zeroes, and it's only getting harder as the Web giants flood the world with high-quality, zero-cost software. Web giants like LinkedIn, for example: Take a look at LinkedIn's GitHub page, and you'll discover the death of dozens of real or potential startups. Yes, LinkedIn, the company ostensibly set up to "connect the world's professionals to make them more productive and successful," is also a company that has released more than 75 open source projects, some of which have grown up to become huge successes with developers and the enterprises for which they work. Though Facebook and Google get more press for their open source work, LinkedIn has quietly built a world-class developer program that depends upon and feeds open source communities.

10 SQL Tricks That You Didn’t Think Were Possible. Listicles like these do work – not only do they attract attention, if the content is also valuable (and in this case it is, trust me), the article format can be extremely entertaining. 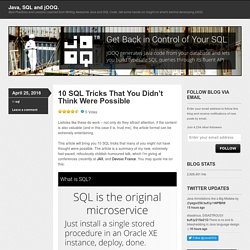 This article will bring you 10 SQL tricks that many of you might not have thought were possible. The article is a summary of my new, extremely fast-paced, ridiculously childish-humoured talk, which I’m giving at conferences (recently at JAX, and Devoxx France. 14 Web Development Tools That Work Better Than Anything. There are so many web development projects on the market that we literary don’t have enough time to read the info. 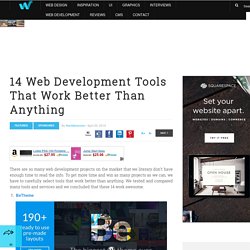 To get more time and win as many projects as we can, we have to carefully select tools that work better than anything. We tested and compared many tools and services and we concluded that these 14 work awesome. BeTheme BeTheme is one of the greatest WordPress themes, that you can use to create different kinds of websites, for electric, veterinarian, loan agency, charity agency, sitter, moving company, barber, health magazine, book writer, plumber, art agency, interior design company and many others. Why You Should Stop Installing Your WebDev Environment Locally. Have you heard of Docker but thought that it’s only for system administrators and other Linux geeks? 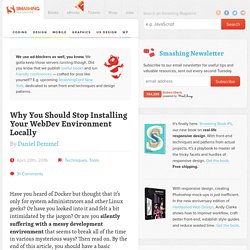 24 Must Have Slack Apps for Bloggers & Marketers. Slack, the team communication app has brought some refreshing change to the way we communicate lately. 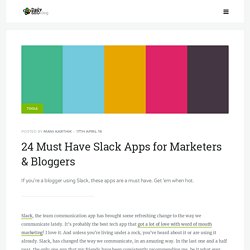 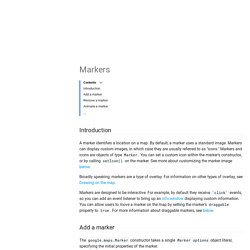 By default, a marker uses a standard image. Markers can display custom images, in which case they are usually referred to as "icons. " Markers and icons are objects of type Marker. About - Snazzy Maps - Free Styles for Google Maps. GitHub - heroku/heroku-buildpack-pgbouncer: Run pgbouncer and stunnel in a dyno along with your application. Preboot. Last updated 28 January 2016 Preboot changes the standard dyno start behavior for web dynos. 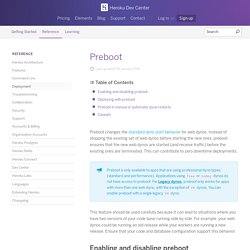 Instead of stopping the existing set of web dynos before starting the new ones, preboot ensures that the new web dynos are started (and receive traffic) before the existing ones are terminated. This can contribute to zero downtime deployments. How to undo (almost) anything with Git. CSS containment. I haven’t heard about the contain property until some weeks ago when I asked about use cases for container queries on twitter and David Baron mentioned it in a response saying that contain: strict; can avoid many of the theoretical problems of container queries. 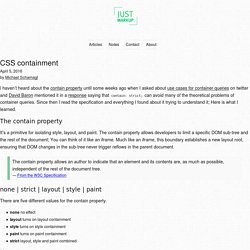 Since then I read the specification and everything I found about it trying to understand it; Here is what I learned. The contain property It’s a primitive for isolating style, layout, and paint. The contain property allows developers to limit a specific DOM sub-tree and the rest of the document; You can think of it like an iframe. Much like an iframe, this boundary establishes a new layout root, ensuring that DOM changes in the sub-tree never trigger reflows in the parent document.

The contain property allows an author to indicate that an element and its contents are, as much as possible, independent of the rest of the document tree. Debouncing and Throttling Explained Through Examples. The following is a guest post by David Corbacho, a front end engineer in London. We've broached this topic before, but this time, David is going to drive the concepts home through interactive demos that make things very clear.

Debounce and throttle are two similar (but different!) Techniques to control how many times we allow a function to be executed over time. The Paciello Group – Your Accessibility Partner (WCAG 2.0/508 audits, VPAT, usability and accessible user experience) The following content written by me, was until recently a part of the W3C Custom Elements specification, but was removed/substantially re-written when a new editor took over. As we think, in the form represented here, it’s a useful introduction to custom element semantics, we have re-published it. Custom Element Semantics The default semantics of a custom element is dependent upon the form in which it is instantiated: by default a custom tag has no special meaning at all.

GitHub takes aim at downtime with DGit. GitHub has rolled out a new feature that it claims will make the widely used code hosting platform far less prone to downtime. Distributed Git (DGit) uses the sync mechanisms of the Git protocol to replicate GitHub's repositories among three servers. Should one server go offline because of a mishap or for maintenance, traffic can be redirected to the other two. Using Git as the replication mechanism provides companies with a little more flexibility than simply mirroring blocks between disks, according to GitHub. "Think of the replicas as three loosely coupled Git repositories kept in sync via Git protocols, rather than identical disk images full of repositories," says the blog post describing the new system. Read operations can be directed to a specific replica if needed, and new replicas of a given repository can be created if a file server has to be taken offline. Angular 2 - Les Types, comme dans TypeScript.

Run this demo in my JavaScript Demos project on GitHub. I stumbled upon this behavior when I was building my HTML Dropdown menu component in Angular 2. 5 dev tools for better code security. Parasoft’s Development Testing Platform (DTP) performs static analysis either in the IDE or as part of a build or continuous integration. Managing Machines at Spotify. Microsoft is adding the Linux command line to Windows 10.

Advantages of Exceptions (The Java™ Tutorials > Essential Classes > Exceptions) Injecting services in services in Angular 2. First Introductions Angular2 use Service, Http, Components and Routing. DevStickers — Stickers and T-shirts for Web Developers. Mobile Web vs Mobile Apps: Where Should You Invest Your Marketing? Apple’s Swift Programming Language Is Now Open Source. Social. How to use Segment in Angular – Segment. WordPress.com Goes Open Source And Gets A Desktop App. Wireshark 2.0 est dispo. How We Made Our Landing Pages Fast: A Grand Journey.