We have published over 100 non-fiction books. We distribute over 300 books. We work with school districts to improve test scores. 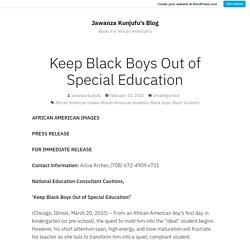 (Chicago, Illinois, March 20, 2010) – From an African American boy’s first day in kindergarten (or pre-school), the quest to mold him into the “ideal” student begins. However, his short attention span, high energy, and slow maturation will frustrate his teacher as she fails to transform him into a quiet, compliant student. Unable to “fix” the child, the teacher refers him to special education. This meeting will determine whether the student… Will stay in the regular classroom or whether he will receive special education services. African American children are only 17 percent of the total school population in America. Special education was never designed to be a dumping ground for African American male students. As a result, a $60 billion special education industry has arisen and profited from the misfortune of Black boys and their families.

Like this: A Book By Dr Jawanza Kunjufu about HEART DISEASE, CANCER and DIABETES. African American Black Teacher teaching to Black Students to Educate Them. By Jazelle Hunt NNPA Washington Correspondent WASHINGTON (NNPA) – For the past 40 years Jawanza Kunjufu has dedicated his life to uplifting African Americans through education and empowerment. 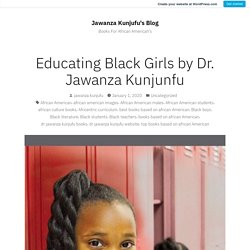 His work as an educational consultant and author of 33 books has centered on the plight and triumphs of African American Males – until now. His latest book, Educating Black Girls, marks a dramatic shift. “Numerous people have asked me to write a book on Black females, but I didn’t feel that was my place – it wasn’t my expertise,” Kunjufu said. After a woman at an event for educators in Oakland, California challenged him and everyone present to pay attention to Black girls, Kunjufu decided to look into it. Black Students Middle Class Teachers. Teach me how to read because I don’t want to go to prison! – Jawanza Kunjufu's Blog. Only 12 percent of Black males are proficient in reading by 8th grade. 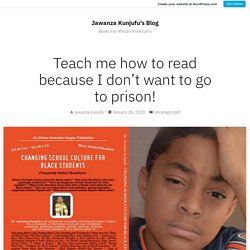 Literacy is the civil rights issue for the 21st century. During the civil rights protests of the 1960s, African American students fought racism and segregation and advocated for social justice. School integration followed, and academic outcomes for Black boys have deteriorated ever since. There has been a 66% decline in Black teachers. Presently, White female teachers are 83% and Black males are less than 2%. They should not be promoted to high school with elementary skills. Black boys are 80 percent of the African American children placed in special education and are retained more than any other student.More than 30 percent are suspended from school. Kunjufu reveals the true source of academic success or failure: school culture.

“We have refused to enter the world of our boys. Based on his 39 years as an educational consultant, Kunjufu offers the following strategies to transform school culture for Black boys: Educating Black Girls by Dr. Jawanza Kunjunfu – Jawanza Kunjufu's Blog. GOD’S PLAN TO ELIMINATE HEART DISEASE, CANCER AND DIABETES BY DR. JAWANZA KUNJUFU – Jawanza Kunjufu's Blog. 17 million African Americans die from cardiovascular diseases (mostly heart disease and stroke) each year.2 million Americans die every year from cancer.Diabetes is the third leading killer of African Americans and the sixth leading killer of Americans overall.40 million Americans suffer from debilitating arthritis.217,000 Americans suffer from kidney failure and are on dialysis.500,000 die from complications related to substance abuse (tobacco, illegal drugs, and alcohol). 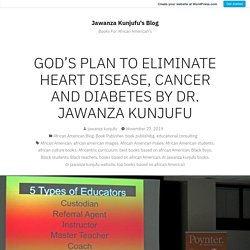 By some estimates, one-third or more of these diseases are preventable, yet the issue of prevention is seldom raised in the debates. According to the Milken Institute, if the U.S. were to make modest improvements were made in prevention and disease management by 2023, 40 million cases of chronic disease could be avoided, $218 billion spent annually in treatment costs could be saved, and improved productivity would increase the GDP by an estimated $905 billion. Physical Symptoms, Spiritual Source. WHAT BLACK PARENTS MUST DO THIS SUMMER BY: DR. JAWANZA KUNJUFU – Jawanza Kunjufu's Blog. There is a 3 year gap between Black and White students. 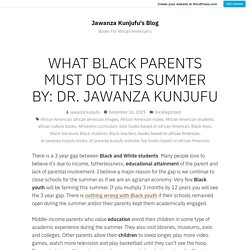 Many people love to believe it’s due to income, fatherlessness, educational attainment of the parent and lack of parental involvement. I believe a major reason for the gap is we continue to close schools for the summer as if we are an agrarian economy. Very few Black youth will be farming this summer. If you multiply 3 months by 12 years you will see the 3 year gap. There is nothing wrong with Black youth if their schools remained open during the summer and/or their parents kept them academically engaged.

Middle-income parents who value education enroll their children in some type of academic experience during the summer. Black parents cannot allow their child to lose 3 months every year. We need every parent to make sure their child reads at least one book per week and to write a book report. I have a theory that I can go into your house and within 5 minutes tell you the type of student who lives there and predict their future.