What Happens When You Zap Coral With The World’s Most Powerful X-ray Laser? Have you ever wondered what the weather was like the day Hamlet premiered? 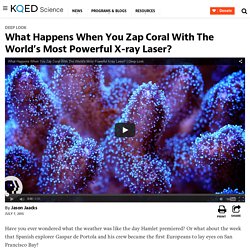 Or what about the week that Spanish explorer Gaspar de Portola and his crew became the first Europeans to lay eyes on San Francisco Bay? Neil Tangri is developing a new way to look for clues about ancient weather. He and his colleagues at the Stanford Linear Accelerator Center, also known as SLAC, are using a synchrotron – one of the world’s most powerful X-ray machines – to look deep inside coral skeletons.

“We’re trying to get a sense of long term behavior of ocean temperature and precipitation,” Tangri says. Corals are unusual creatures. The coral that Tangri and his colleagues are taking X-rays of is Porites lutea from American Samoa. Detailed written weather records have only been around for about 150 years. Worldwide weather patterns tend to happen in cycles. To tease out clues, Tangri is taking advantage of a biological quirk in hard corals. Lick Me I'm Delicious Unveils Glow-in-the-Dark Ice Cream. The holiday season is here and we can be sure of this, if for no other reason, than our food has started to get "festive. 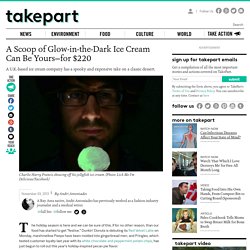 " Dunkin' Donuts is debuting its Red Velvet Latte on Monday, marshmellow Peeps have been molded into gingerbread men, and Pringles, which tested customer loyalty last year with its white chocolate and peppermint potato chips, has just begun to roll out this year's holiday-inspired pecan pie flavor. But let's be real—those are all pretty expected incarnations of holiday junk food fare. They pale in comparison, literally, to what's being reported as the world's first glow-in-the-dark ice cream, which debuted this week in the U.K.

Lick Me I'm Delicious is a boutique ice cream company that specializes in unusual flavors, like lamb, chili and beer. The secret life of corals. Image: [name here]/Shutterstock We think of corals as static because we rarely see them move, but if we stopped for a few months and recorded their day-to-day, we would marvel at their beauty and grace. 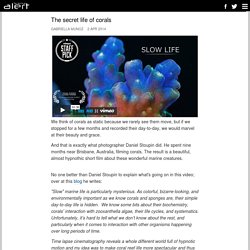 And that is exactly what photographer Daniel Stoupin did. He spent nine months near Brisbane, Australia, filming corals. The result is a beautiful, almost hypnothic short film about these wonderful marine creatures. No one better than Daniel Stoupin to explain what's going on in this video; over at this blog he writes: "Slow" marine life is particularly mysterious. Time lapse cinematography reveals a whole different world full of hypnotic motion and my idea was to make coral reef life more spectacular and thus closer to our awareness. Go fullscreen, you won't regret it. New Order of Marine Creatures Discovered. Newly-Discovered Deep Sea ‘Mushroom’ Could Re-Write Tree of Life. Most newly-discovered species are easy to classify. 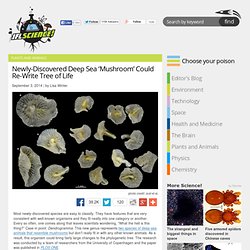 They have features that are very consistent with well-known organisms and they fit neatly into one category or another. Every so often, one comes along that leaves scientists wondering, “What the hell is this thing?” Case in point: Dendrogramma. This new genus represents two species of deep-sea animals that resemble mushrooms but don’t really fit in with any other known animals.

As a result, this organism could bring fairly large changes to the phylogenetic tree. The 18 specimens were caught during an expedition in the Bass Strait, between Australia and Tasmania back in 1986. Ecopico Reef Desktop Aquarium - Eco Pico Reef Tank. Based on the inspired design of the EcoPico, the Reef-Ready version gets a boost in the lighting department. 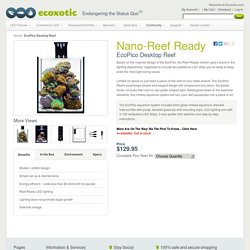 Upgraded to include two additional LED strips you're ready to keep even the most light loving corals. Raising Pet Jellyfish: How To: Easy DIY Jellyfish Kreisel Tank. For the longest time I could not find clear easy to understand plans for building a jellyfish aquarium. 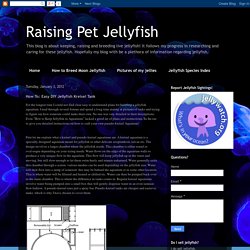 I read through several forums and spend a long time staring at pictures of tanks and trying to figure out how someone could make their own. No one was very detailed in their descriptions. Even "How to Keep Jellyfish in Aquariums" lacked a good set of plans and instructions. So Im out to give you detailed instructions on how to craft your own pseudo-kreisel Aquarium! First let me explain what a kreisel and pseudo kreisel aquariums are. Microbeads From Facewash And Toothpaste Could Starve Coral, New Study Suggests. Microbeads might work to scrub us clean, but the tiny pieces of plastic found in some face wash, soap and toothpaste products can wreak havoc on coral, new research suggests. 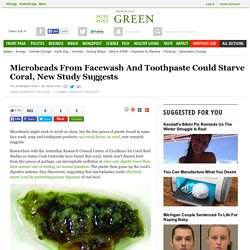 Researchers with the Australian Research Council Centre of Excellence for Coral Reef Studies at James Cook University have found that coral, which don't discern food from tiny pieces of garbage, eat microplastic pollution at rates only slightly lower than their normal rate of feeding on marine plankton. The plastic then gums up the coral's digestive systems, they discovered, suggesting that microplastics could effectively starve coral by preventing proper digestion of real food. Because microplastics are so small, they often float from our drains through filtration systems and into the ocean, where they resemble zooplankton, sediment and other microscopic organisms -- in other words, coral and fish food.

Hoogenboom's study was recently published in the March, 2015, issue of the Journal of Marine Biology.