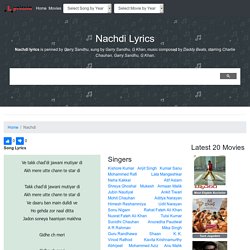 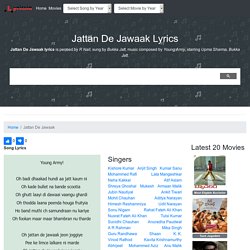 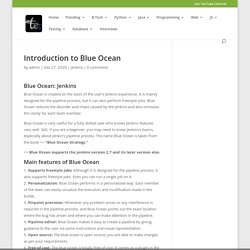 It is mainly designed for the pipeline process, but it can also perform freestyle jobs. Blue Ocean reduces the disorder and chaos caused by the Jenkins and also increases the clarity for each team member. Blue Ocean is very useful for a fully skilled user who knows Jenkins features very well. Still, if you are a beginner, you may need to know Jenkins’s basics, especially about Jenkin’s pipeline process. >> Blue Ocean supports the Jenkins version 2.7 and its later version also. Best Books to Learn Python. In this article, we will highlight some of the best collections of the books to learn Python. 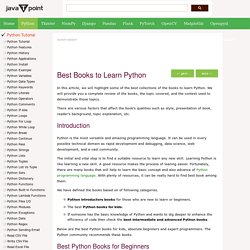 We will provide you a complete review of the books, the topic covered, and the context used to demonstrate those topics. There are various factors that affect the book's qualities such as style, presentation of book, reader's background, topic explanation, etc. Introduction Python is the most versatile and amazing programming language.

It can be used in every possible technical domain as rapid development and debugging, data science, web development, and a vast community. The initial and vital step is to find a suitable resource to learn any new skill. Installation of Keras library in Anaconda. To install Keras, you will need Anaconda Distribution, which is supported by a company called Continuum Analytics. 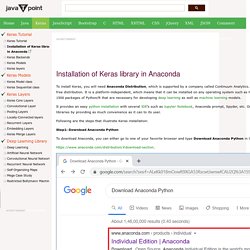 Anaconda provides a platform for Python and R languages, which is an open-source and free distribution. It is a platform-independent, which means that it can be installed on any operating system such as MAC OS, Windows, and Linux as per the user's requirement. It has come up with more than 1500 packages of Python/R that are necessary for developing deep learning as well as machine learning models. Deep Learning Tutorial. Deep learning is based on the branch of machine learning, which is a subset of artificial intelligence. 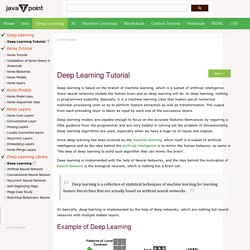 Since neural networks imitate the human brain and so deep learning will do. In deep learning, nothing is programmed explicitly. Basically, it is a machine learning class that makes use of numerous nonlinear processing units so as to perform feature extraction as well as transformation. The output from each preceding layer is taken as input by each one of the successive layers. Best Mobile Phone Spying Apps. What is a Spying App Mobile phone spying apps are smartphone monitoring application/ software. 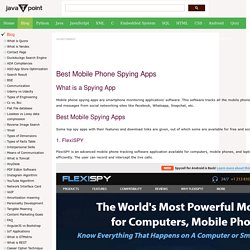 This software tracks all the mobile phone activities, such as the incoming and outgoing calls, SMS, locations, browser history, and messages from social networking sites like Facebook, Whatsapp, Snapchat, etc. Best Mobile Spying Apps Some top spy apps with their features and download links are given, out of which some are available for free and some in paid versions. 1. FlexiSPY is an advanced mobile phone tracking software application available for computers, mobile phones, and laptops. Difference between Internet and Intranet. Almost everyone is using the Internet in this technological era. 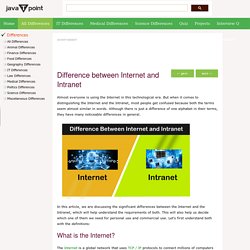 But when it comes to distinguishing the Internet and the Intranet, most people get confused because both the terms seem almost similar in words. Although there is just a difference of one alphabet in their terms, they have many noticeable differences in general. In this article, we are discussing the significant differences between the Internet and the Intranet, which will help understand the requirements of both. 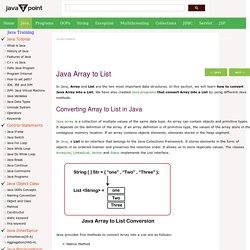 In this section, we will learn how to convert Java Array into a List. We have also created Java programs that convert Array into a List by using different Java methods. Java array is a collection of multiple values of the same data type. Exception Handling in JavaScript. An exception signifies the presence of an abnormal condition which requires special operable techniques. 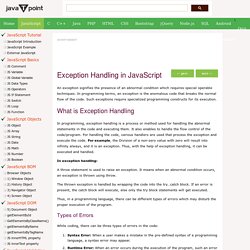 In programming terms, an exception is the anomalous code that breaks the normal flow of the code. Such exceptions require specialized programming constructs for its execution. What are the uses of JavaScript. JavaScript is a light-weight object-oriented programming language that is used by several websites for scripting the webpages. It is an interpreted, full-fledged programming language. JavaScript enables dynamic interactivity on websites when it is applied to an HTML document. JavaScript helps the users to build modern web applications to interact directly without reloading the page every time.

JavaScript is commonly used to dynamically modify HTML and CSS to update a user interface by the DOM API. It is mainly used in web applications. Let's discuss the uses of JavaScript. 1. What is AWS Elasticsearch. Elasticsearch is an open-source database tool that can be easily deployed and operated. It is used for the analytic purpose and searching your logs and data in general. Basically, it is a NoSQL database to store the unstructured data in document format. Insertion Sort in Python. The Insertion sort is a straightforward and more efficient algorithm than the previous bubble sort algorithm. The insertion sort algorithm concept is based on the deck of the card where we sort the playing card according to a particular card.

It has many advantages, but there are many efficient algorithms available in the data structure. While the card-playing, we compare the hands of cards with each other. Most of the player likes to sort the card in the ascending order so they can quickly see which combinations they have at their disposal. The insertion sort implementation is easy and simple because it's generally taught in the beginning programming lesson.

The insertion sort algorithm is not so fast because of it uses nested loop for sort the elements. Let's understand the following terms. Apache Solr Tutorial. Solr is a specific NoSQL technology that is optimized for a unique class of problems. Solr is a scalable, ready-to-deploy enterprise search engine that was developed to search a large volume of text-centric data and returns results sorted by relevance. The following are the benefits of Apache Solr: What is the Difference Between C and Java. C is a procedural, middle-level, compiled, and general-purpose programming language.

Java is a high-level, object-oriented, interpreted, and general-purpose programming language. Another key difference between C and Java is that C follows the top-down approach to develop applications while Java follows the bottom-up approach. C is easier to learn than Java. We can quickly and easily develop an application using Java. If the same program is created using the C language, the code will be lengthy and will take more time than Java. Which is Better Java or Python. Which is Better Java or Python - Javatpoint. Push Brothers - Web Notification. Tower of Hanoi Puzzle Using Python.

What is Mobile Application Testing. As we know, explosive growth in the use of mobile devices and the development of mobile devices makes testing an essential requirement for the successful and rapid delivery of high-quality mobile applications. How to add a class to an element using JavaScript. PhoneGap Tutorial. Our PhoneGap tutorial is designed for the aspirants who wish to know how to design the cross-platform applications using PhoneGap. Our tutorial covers all the basic concepts of PhoneGap that include environment setup, user interface, storage, geolocation, and many more. AWS Global Infrastructure.

Software Testing Life Cycle. How to reverse a string in Python. PostgreSQL Self Join. In this section, we are going to understand the working of PostgreSQL Self joins, which is used to relate rows within the same table. Laravel Tutorial. Laravel tutorial provides basic and advanced concepts. Programmable Logic Controller. What is Android Mobile Operating System? Perryshelly. Major IoT Boards in Market. Creating a table and storing data in PhoneGap. Difference between Flutter and Xamarin. PostgreSQL INNER Join. Difference between Flutter and Kotlin. How to make a website. How to position an image in CSS. Joining Three or More Tables in SQL. Android Beam. Splunk Types of command. WordPress vs Blogger. How to reverse a number in Python. How to appear offline on Facebook.