2. The Angular 2 CLI and TypeScript. The Web Dev Zone is brought to you by Stormpath—offering a pre-built Identity API for developers. 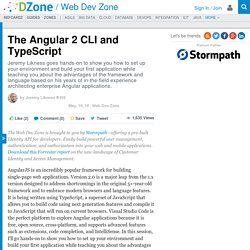 Easily build powerful user management, authentication, and authorization into your web and mobile applications. Download this Forrester report on the new landscape of Customer Identity and Access Management. AngularJS is an incredibly popular framework for building single-page web applications. Version 2.0 is a major leap from the 1.x version designed to address shortcomings in the original 5+-year-old framework and to embrace modern browsers and language features. It is being written using TypeScript, a superset of JavaScript that allows you to build code using next generation features and compile it to JavaScript that will run on current browsers. In this talk, I focused on scaffolding the app using the Angular-CLI to rapidly build a reference app. Anders Hejlsberg on TypeScript 2. 1 0 Basics of TypeScript. Ionic, Phaser, Sencha Touch & PhoneGap. The title of this post, although it describes the intention, might be a little bit confusing. 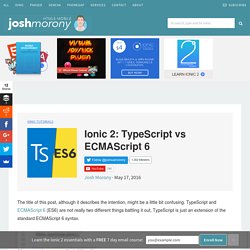 TypeScript and ECMAScript 6 (ES6) are not really two different things battling it out, TypeScript is just an extension of the standard ECMAScript 6 syntax. If you’ve done any research into what TypeScript is you may have seen it referred to as a “typed superset of JavaScript”, which is a very succinct description but I think it suffers from the typical problem of making things sound more complicated than they are. Depending on which stats or mathematics courses you took in school and how good your memory is, you may or may not know what a “superset” is. If we have a set of data (A), then a superset (B) of that data would contain everything that is in set A, as well as some more data: From JavaScript to TypeScript, Pt. III: Type Inference & Compatibility. Note. 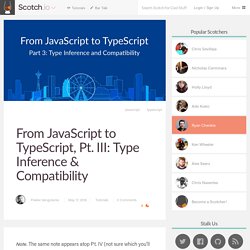 The same note appears atop Pt. IV (not sure which you'll see first). Ready for Review // The examples here are a bit abstract -- mostly stripped-down samples from my own code. Abstraction is the nature of the topics in these two articles: Generics are by definition abstract, and type inference is an important under-the-hood detail to understand when using them. They're not frequently covered in detail, but I think it's important knowledge to have to ease debugging and really get it when working with TS. I think these mostly wrap up what I'd like to cover with TS. 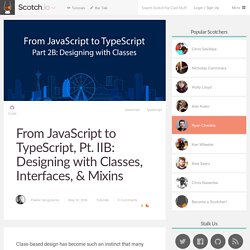 After reading this article, you'll be able to: Write and design robust classes and interfaces;Decide whether classes or interfaces are more appropriate for your use case; andArticle the major principles of object-oriented programming and design. All the code samples for this article are hosted at my GitHub. Build Your Own Chrome Extension Using Angular 2 & TypeScript. This article was peer reviewed by Dan Prince. 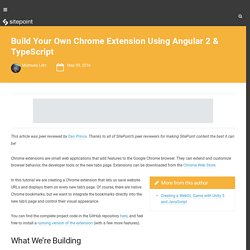 Thanks to all of SitePoint’s peer reviewers for making SitePoint content the best it can be! Chrome extensions are small web applications that add features to the Google Chrome browser. They can extend and customize browser behavior, the developer tools or the new tabs page. Extensions can be downloaded from the Chrome Web Store. An Introduction to TypeScript Blog. TypeScript is an open-source JavaScript compiler, developed by Microsoft. 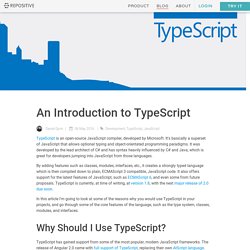 It's basically a superset of JavaScript that allows optional typing and object-orientated programming paradigms. It was developed by the lead architect of C# and has syntax heavily influenced by C# and Java, which is great for developers jumping into JavaScript from those languages. By adding features such as classes, modules, interfaces, etc., it creates a strongly typed language which is then compiled down to plain, ECMAScript 3 compatible, JavaScript code.

It also offers support for the latest features of JavaScript, such as ECMAScript 6, and even some from future proposals. TypeScript is currently, at time of writing, at version 1.8, with the next major release of 2.0 due soon. Typescript - Daniel Rosenwasser. Learn Typescript AMD with RequireJS. JavaScript Tip - Using Gulp with TypeScript. You can easily write your Gulp tasks with TypeScript. 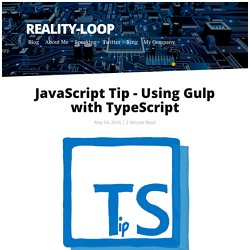 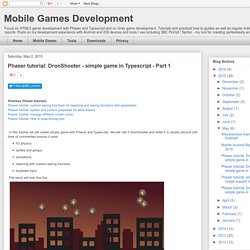 We will call it DronShooter and while it is simple (around 240 lines of commented source) it uses:P2 physicssprites and groups,animations,tweening with custom easing functionskeyboard input The result will look like this: From JavaScript to TypeScript Pt. I: Types & Variables. TypeScript Deep Dive. I've been looking at the issues that turn up commonly when people start using TypeScript. 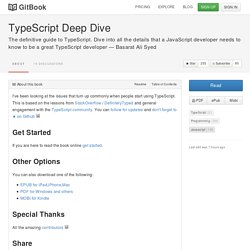 This is based on the lessons from StackOverflow / DefinitelyTyped and general engagement with the TypeScript community. You can follow for updates and don't forget to ★ on Github 🌹 Get Started If you are here to read the book online get started. TypeScript.Today. Visual Studio Code for Mac Developers. Updated to VS Code 1.0!!! 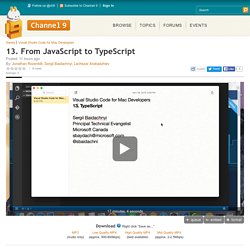 Today, JavaScript is so popular and it's possible to find lots of projects that contain hundreds thousands lines of JavaScript code. Using JavaScript you can create web sites, Windows applications and server side services. But in case of really large projects it's not easy to support the existing code. Compared to C#, C++ and Java, JavaScript lacks static typing, classes and interfaces that don't allow common IDEs to provide richer environment.

GitHub - DanWahlin/Angular2-JumpStart: Angular 2 and TypeScript JumpStart example. Typescript Mouse Input for HTML5 Games. To start out with, let's capture the mouse down event and output the x and y coordinates you click on the canvas. We are going to need to create a function that can handle the MouseEvent. We will call this function mouseDown and inside our onload function we will need to add an event listener to listen to our mouse down event by calling canvas.addEventListener(). The mouse down event is captured for the user clicking the mouse anywhere in the browser, not just in the canvas. This isn't real useful if you're writing a canvas game, because you want to know where the user is clicking only if that click is happening in the canvas. Because of this, we have to adjust the x and y coordinates that come into our mouseDown event handler by the canvas offset. function mouseDown(event: MouseEvent): void { var x: number = event.x; var y: number = event.y;

Devchat. Typescript Collision Detection Part 2. How Dashlane Improved Code Quality with TypeScript - Dashlane Blog. Producing quality code is one of our main objectives at Dashlane. We’re TDD aficionados, and always keep a close eye on our unit test coverage. Every change in the codebase must result in a pull request to be reviewed by team members before it can be merged. This is why, when we got started 6 months ago on a new large JavaScript project, we decided to go with TypeScript in order to keep improving our code quality, we felt like we needed the additional safety net of a static type system. TypeScript vs FlowType. While you're reading this, keep in mind that I'm available for hire! If you've got a JavaScript project getting out of hand, or a Golang program that's more "stop" than "go," feel free to get in touch with me.

I might be able to help you. You can find my resume here. TypeScript Game Dev - Basic Keyboard Input and Object Pooling. TypeScript Game Development - Basic 2D Collision Detection. HTML5 Game Development Tutorial using TypeScript. Angular 2 Typescript - Developer Resources. What's New in TypeScript? Typescript-ioc. A Lightweight annotation-based dependency injection container for typescript. This is a lightweight annotation-based dependency injection container for typescript. It can be used on browser or on node.js server code. Basic Usage import Resource = IoC.Resource; import Inject = IoC.Inject; @Resource class PersonDAO { Angular15-typescript. TypeScript for Angular 2 - Part 4 (Classes and Interfaces) Classes After we learnt some amazing features of TypeScript static typing, we cannot leave class and interface behind, which is the most fundamental components in OO paradigm.

We have already seen Classes and their declaration in TypeScript for Angular 2 - Part 2. The syntax used in TypeScript to define classes are similar to what ES2015 offers. So, we will skip to access modifier. TypeScript Deep Dive. Typescript+Gulp+Browserify+Less+Web Server LiveReload — Pixel Heart. In this tutorial we create an all-in-one gulp configuration file for Typescript.First we have to create our project folder, for example “MyTypeScriptProj”.First dependencies are:NPM and NodeSo you have to install it, the installation process is out of scope of this tutorial, but is very easy todo, simply go to node website and download the installer. The Case for TypeScript. TypeScript for Angular 2 - Part 4 (Classes and Interfaces) Building applications with Node & TypeScript. TypeScript-Handbook/react-webpack.md at master · Microsoft/TypeScript-Handbook.

Is TypeScript Worth Learning For Web Development? TypeScript is defined as a superset of JavaScript, which means it behaves identical to JavaScript but with extra stuff added on. The language hasn’t been around too long but it’s already quite popular in the dev community. It grants JS developers access to powerful tools & techniques for writing modern JavaScript, coupled with the option to output ES5 or ES6 code. The Angular team even supports TypeScript as a major part of their framework update. AngularJS setup with TypeScript – giridharprakash.me. TypeScript 2.0 Preview. Anders Hejlsberg returned to Microsoft's Build conference in 2016 to talk about the current state of TypeScript and show off some amazing features coming in the next few months.

Hejlsberg divided his talk into three main parts, allocating the first 15 minutes to retelling of the high-level story of TypeScript. My Thoughts on TypeScript – Soenke Sothmann – Passionate Web Developer, Software Architect and Technology Enthusiast. I use TypeScript, the statically typed superset of JavaScript, for almost three years now on a daily basis in product development. Typescript, Angular 2 and NetBeans IDE : An unbeatable trio.

Learning TypeScript: A Code Camp Adventure. Last weekend I had the pleasure of presenting a couple sessions on TypeScript at Boston Code Camp 25, one on my own and one with my good friend and colleague, Bob Goodearl. We’ve just posted the materials, which may be useful beyond the presentation. Building a Web Application with Node and Typescript - Without the loop. For the purpose of this article I define a web application as a HTTP network service, such as what we might build with Asp.NET MVC, Ruby on Rails, Django, Php etc. This article will demonstrate how to write a web application in Typescript that runs on Node.js. Running as much of an application as possible on the client creates a richer user experience and a better perception of performance. TypeScript + Express + Node.js – Brian Love.