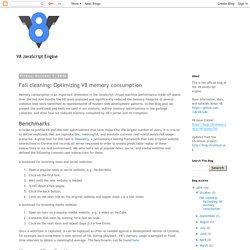 Over the last few months the V8 team analyzed and significantly reduced the memory footprint of several websites that were identified as representative of modern web development patterns. In this blog post we present the workloads and tools we used in our analysis, outline memory optimizations in the garbage collector, and show how we reduced memory consumed by V8’s parser and its compilers. You Might Not Need JavaScript. Yarn: A new package manager for JavaScript. In the JavaScript community, engineers share hundreds of thousands of pieces of code so we can avoid rewriting basic components, libraries, or frameworks of our own. 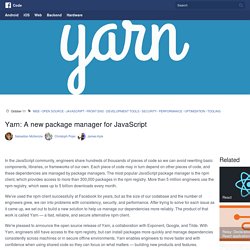 Each piece of code may in turn depend on other pieces of code, and these dependencies are managed by package managers. The most popular JavaScript package manager is the npm client, which provides access to more than 300,000 packages in the npm registry. Google Codelabs. Usability Testing of Inline Form Validation: 40% Don't Have It, 20% Get It Wrong - Articles - Baymard Institute. The benefits of inline form validation are numerous when implemented correctly, yet 40% of sites still don’t have it, and 20% of the sites that do have flawed implementations. 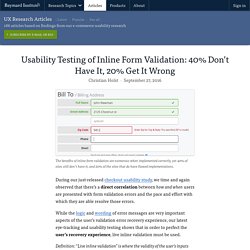 During our just-released checkout usability study, we time and again observed that there’s a direct correlation between how and when users are presented with form validation errors and the pace and effort with which they are able resolve those errors. While the logic and wording of error messages are very important aspects of the user’s validation error recovery experience, our latest eye-tracking and usability testing shows that in order to perfect the user’s recovery experience, live inline validation must be used. Google Noto Fonts. When text is rendered by a computer, sometimes characters are displayed as “tofu”. 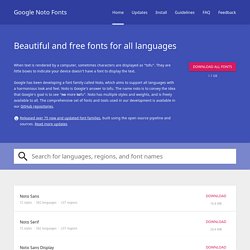 They are little boxes to indicate your device doesn’t have a font to display the text. Free Learn Grid Layout video series. What every JavaScript developer should know about Unicode. This story starts with a confession: I was afraid of Unicode for a long time. 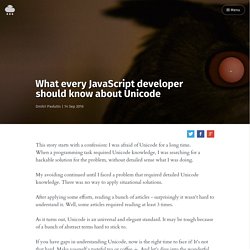 When a programming task required Unicode knowledge, I was searching for a hackable solution for the problem, without detailed sense what I was doing. My avoiding continued until I faced a problem that required detailed Unicode knowledge. Htmlcssguide. Welcome to HTML 5.2!Telerik Developer Network. On the 21st of June 2016, HTML 5.1 has turned from being a Working Draft into a Candidate Recommendation. 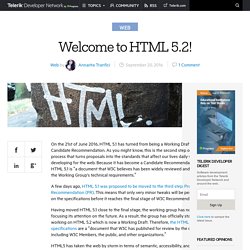 As you might know, this is the second step of the process that turns proposals into the standards that affect our lives daily when developing for the web. Because it has become a Candidate Recommendation, HTML 5.1 is a document that W3C believes has been widely reviewed and satisfies the Working Group's technical requirements. A few days ago, HTML 5.1 was proposed to be moved to the third step: Proposed Recommendation (PR). This means that only very minor tweaks will be performed on the specifications before it reaches the final stage of W3C Recommendation. Having moved HTML 5.1 close to the final stage, the working group has now started focusing its attention on the future. HTML5 has taken the web by storm in terms of semantic, accessibility, and APIs available without the need for third-party dependencies.

In particular, I will focus on: HTML5 New Semantic Elements Features at Risk. Highlights from Google’s Progressive Web Apps training in London – Samsung Internet Dev Rel – Medium. What, Exactly, Makes Something A Progressive Web App? Since Frances and I published a blog post last year introducing Progressive Web Apps, a healthy conversation has started about what is and isn’t a PWA. 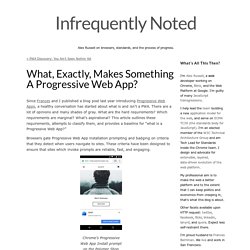 There are a lot of opinions and many shades of gray. What are the hard requirements? Which requirements are marginal? What’s aspirational? Building Resizeable Components with Relative CSS Units. An Introduction to Service Workers - JS Monthly London. Parallel Processing in JS - Advanced Web Machinery. Motivation For a long time, Javascript was missing any kind of processing threads. 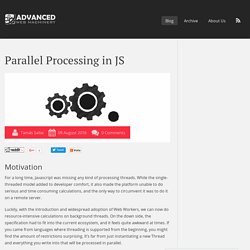 While the single-threaded model added to developer comfort, it also made the platform unable to do serious and time consuming calculations, and the only way to circumvent it was to do it on a remote server. Using A Static Site Generator At Scale: Lessons Learned. Static site generators are pretty en vogue nowadays. 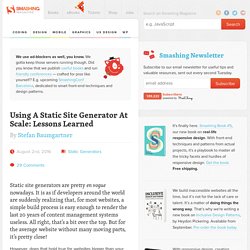 It is as if developers around the world are suddenly realizing that, for most websites, a simple build process is easy enough to render the last 20 years of content management systems useless. All right, that’s a bit over the top. But for the average website without many moving parts, it’s pretty close! However, does that hold true for websites bigger than your humble technology blog? Make the Web Work For Everyone. Millions of websites have compatibility problems on one or more of the major browsers, leading to a poor user experience. 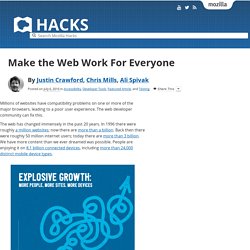 Examples of these include AngularJS, React.js, Play! State of the Virtual DOM - Jscrambler BlogJscrambler Blog. Virtual DOM or Virtual Document Object Model is a convention for changing the document tree structure of a page, including the style and content. Conceptual implementations of a virtual DOM can be found in a number of modern frameworks that exist today.

You might even be using some right now and you don’t even know it. The most common examples of Virtual DOM would be React, Mithril, and jQuery. The key here is that they all use a unique method for rendering changes to the DOM. How to use Chrome developer tools to test layouts. Tips for Becoming a JavaScript Developer. Easily build powerful user management, authentication, and authorization into your web and mobile applications.Download this Forrester report on the new landscape of Customer Identity and Access Management, brought to you in partnership with Stormpath. Simplify Front-end JS and CSS Optimization With Gulp. Where The Web Is Going In 2016 -Telerik Developer Network. DevTools Digest: DevTools in 2016 and Beyond. GitHub - joshbuchea/HEAD: A list of everything that could go in the <head> of your document. What Has Microsoft Done For You Lately? -Telerik Developer Network.

Making a Simple Site Work Offline with ServiceWorker. Do You Know These Eight HTML5 Tags? As a web developer, you will probably take advantage of a whole range of different tags when putting together your next site build. HTML5 Rocks - A resource for open web HTML5 developers.