Run Mac OS X on PC, Free and Easy with VMware Player 3. Ubuntu as a home server. Part 1. Dynamic DNS. Recently I spent some time with my old Desktop PC to configure it as my home server: OpenVPN, File Share, TimeMachine Server, VMware Server with several Windows Machines (it is old Desktop, but still powerful). 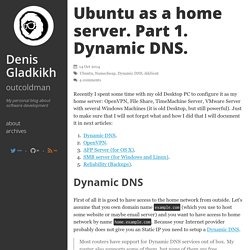 Just to make sure that I will not forget what and how I did that I will document it in next articles: First of all it is good to have access to the home network from outside. Let's assume that you own domain name example.com (which you use to host some website or maybe email server) and you want to have access to home network by name home.example.com. Because your Internet provider probably does not give you an Static IP you need to setup a Dynamic DNS.

Most routers have support for Dynamic DNS services out of box. Namecheap In my case I use Namecheap as a DNS provider for example.com. One advice, if you own domain example.com you can register Free DNS record home.example.com and enable Dynamic DNS only for this record. Dynamic DNS client - ddclient $ sudo apt-get install ddclient. How to learn Linux. In the last year folks asked me several times about Linux, about how to learn it after Windows. 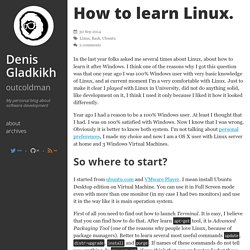 I think one of the reasons why I got this question was that one year ago I was 100% Windows user with very basic knowledge of Linux, and at current moment I'm a very comfortable with Linux. Using docker at home. The New Minimalist Operating Systems. Part of my work on the Technical Alliances team at Docker involves exploring innovative projects our ecosystem partners are working on. 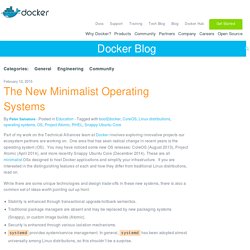 One area that has seen radical change in recent years is the operating system (OS). You may have noticed some new OS releases: CoreOS (August 2013), Project Atomic (April 2014), and more recently Snappy Ubuntu Core (December 2014). These are all minimalist OSs designed to host Docker applications and simplify your infrastructure. If you are interested in the distinguishing features of each and how they differ from traditional Linux distributions, read on. While there are some unique technologies and design trade-offs in these new systems, there is also a common set of ideas worth pointing out up front: Newbie's Overview of Docker. Troubleshooters.Com® and Linux Library Present: Newbie's Overview of Docker What, Why and How Copyright © 2014 by Steve Litt -- Legal. 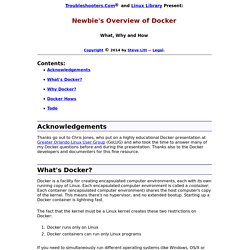 Contents: Thanks go out to Chris Jones, who put on a highly educational Docker presentation at Greater Orlando Linux User Group (GoLUG) and who took the time to answer many of my Docker questions before and during the presentation. Docker is a facility for creating encapsulated computer environments, each with its own running copy of Linux. The fact that the kernel must be a Linux kernel creates these two restrictions on Docker: MSDN Blogs. Like many people I've talked to recently, I've heard about Docker, I've spent the 30 minutes over lunch playing with Docker, but I've never really had the time to learn it. 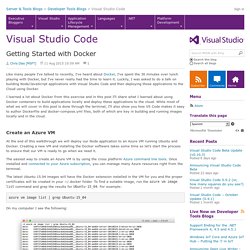 Luckily, I was asked to do a talk on building Node/JavaScript applications with Visual Studio Code and then deploying those applications to the Cloud using Docker. I learned a lot about Docker from this exercise and in this post I'll share what I learned about using Docker containers to build applications locally and deploy these applications to the cloud. While most of what we will cover in this post is done through the terminal, I'll also show you how VS Code makes it easy to author Dockerfile and docker-compose.yml files, both of which are key in building and running images locally and in the cloud.

Getting started with Docker by Dockerizing this Blog. Docker is an interesting technology that over the past 2 years has gone from an idea, to being used by organizations all over the world to deploy applications. 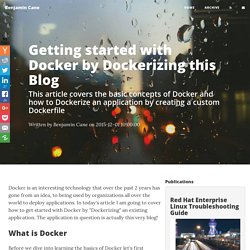 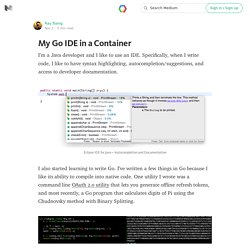 Specifically, when I write code, I like to have syntax highlighting, autocompletion/suggestions, and access to developer documentation. Setup PayumServer in the blink of an eye. For App Developers: An introduction to Kubernetes and Containers. The Container is the New Process In the beginning there was the computer. 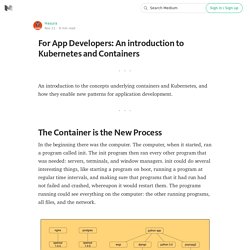 The computer, when it started, ran a program called init. The init program then ran every other program that was needed: servers, terminals, and window managers. init could do several interesting things, like starting a program on boot, running a program at regular time intervals, and making sure that programs that it had run had not failed and crashed, whereupon it would restart them. The programs running could see everything on the computer: the other running programs, all files, and the network. Multiple processes running together on a computer. Docker — One Of The Hot Tech Trends Nowadays! Docker — One Of The Hot Tech Trends Nowadays! 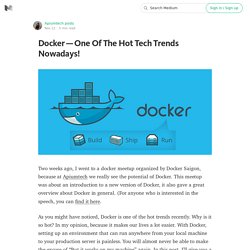 Two weeks ago, I went to a docker meetup organized by Docker Saigon, because at Apiumtech we really see the potential of Docker. This meetup was about an introduction to a new version of Docker, it also gave a great overview about Docker in general. (For anyone who is interested in the speech, you can find it here. As you might have noticed, Docker is one of the hot trends recently. Kick-off Pain by Dockerizing Your Application. Kick-off Pain by Dockerizing Your Application What is Docker?

According to its official website, Docker is an open platform for building, shipping and running distributed applications. It gives programmers, development teams and operations engineers the common toolbox they need to take advantage of the distributed and networked nature of modern applications. Of course, it doesn’t come to our heart right at once.