The Rise of APIs for Non Developers – Point Nine Land – Medium. Some years ago APIs were clearly built and branded for developers. 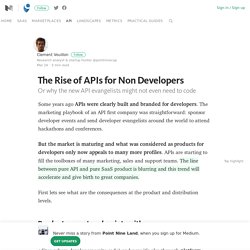 The marketing playbook of an API first company was straightforward: sponsor developer events and send developer evangelists around the world to attend hackathons and conferences. But the market is maturing and what was considered as products for developers only now appeals to many more profiles. APIs are starting to fill the toolboxes of many marketing, sales and support teams. The line between pure API and pure SaaS product is blurring and this trend will accelerate and give birth to great companies. First lets see what are the consequences at the product and distribution levels. Product: more touchpoints with more users Let me take some examples to illustrate it. Clearbit Clearbit is probably the best example of this new generation of API startups which are built to ride this trend. In the same category Email Hunter is also an interesting example of an API first startup with a great Google Chrome extension. 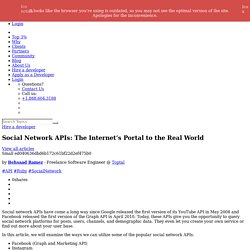 Today, these APIs give you the opportunity to query social network platforms for posts, users, channels, and demographic data. They even let you create your own service or find out more about your user base. In this article, we will examine the ways we can utilize some of the popular social network APIs: Facebook (Graph and Marketing API) Instagram Twitter YouTube Pinterest We will also discuss their limitations, and explore some of the useful tools that are available for use with these APIs. Use social network APIs to get to know your users better than they know themselves. I will focus on one social network API at a time and explain its capabilities, limitations and available tools. Facebook Facebook released the first version of its Graph API in April 2010. Tools Capabilities Access Token Scopes Examples. Build an API to MongoDB. By building a REST API, developers can create a foundation upon which either internal teams or a broader ecosystem can incorporate content or functionality into modern applications. 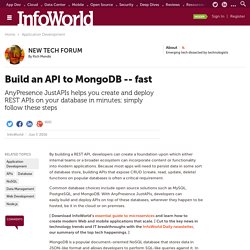 Because most apps will need to persist data in some sort of database store, building APIs that expose CRUD (create, read, update, delete) functions on popular databases is often a critical requirement. Common database choices include open source solutions such as MySQL, PostgreSQL, and MongoDB. With AnyPresence JustAPIs, developers can easily build and deploy APIs on top of these databases, wherever they happen to be hosted, be it in the cloud or on premises. MongoDB is a popular document-oriented NoSQL database that stores data in JSON-like format and allows developers to perform SQL-like queries against it. In this article, we will walk through a brief tutorial to illustrate how easy it is to build and deploy an API on top of your MongoDB instance.

Let’s get started. 63 Insanely Useful APIs Across 12 Segments to Supercharge Your Product. We at LTP have closely watched and observed the FinTech section. 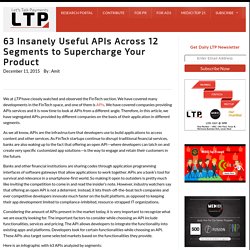 We have covered many developments in the FinTech space, and one of them is APIs. We have covered companies providing APIs services and it is now time to look at APIs from a different angle. Therefore, in this article, we have segregated APIs provided by different companies on the basis of their application in different segments. As we all know, APIs are the infrastructure that developers use to build applications to access content and other services. As FinTech startups continue to disrupt traditional financial services, banks are also waking up to the fact that offering an open API—where developers can latch on and create very specific customized app solutions—is the way to engage and retain their customers in the future.

Banks and other financial institutions are sharing codes through application programming interfaces of software gateways that allow applications to work together. Braintree CardConnect Dwolla Google Intuit. 9 Cool Public JSON Feeds - Gearside Creative. Finding fun public JSON feeds to experiment with is surprisingly difficult, so I thought I'd compile a list of as many interesting and useful examples as I could find. 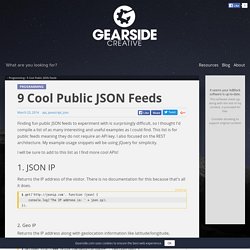 This list is for public feeds meaning they do not require an API key. I also focused on the REST architecture. My example usage snippets will be using jQuery for simplicity. I will be sure to add to this list as I find more cool APIs! Returns the IP address of the visitor. 2. Returns the IP address along with geolocation information like latitude/longitude, city/state, and even ISP. 3. Here is a tool that returns the value of the entered currency in 2009 US Dollars. ProgrammableWeb - APIs, Mashups and the Web as Platform.