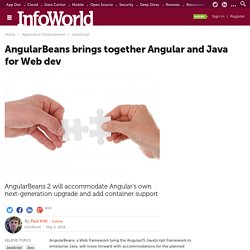 Begun in January 2015, AngularBeans allows developers to use Google's AngularJS for front-end Web development with Java EE on the back end. The developer of AngularBeans, Bessem Hmidi, sees the project filling a need in the Java space for an alternative to JavaServer Faces Web UI technology, which has been around for more than a decade. According to Hmidi, Angular is the leading JavaScript single-page application framework, while Java EE 7 offers a lot of enterprise-level services but its presentation layer standard, JSF, is inadequate. Using Angular on the front end helps by including more state-ful clients and making stateless servers easier to scale. Servers use fewer resources to interact with browsers. The current stable release of AngularBeans is 1.0.2. GitHub - blacksonic/angular2-esnext-starter: Angular 2 development in Javascript with ES6/ES7 syntax powered by Babel. Angular 2 0 using Dart ES5 & ES6. Angular 2 0 With ES6 & TypeScript.

Angular 2 0 TypeScript. Built with Angular 2. AngularJS Tutorial #13 - ng-click directive. Build an Angular 1.5 application with ES6 and Components. Tweet this course — we you! 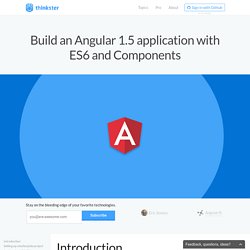 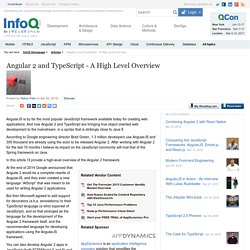 And now Angular 2 and TypeScript are bringing true object oriented web development to the mainstream, in a syntax that is strikingly close to Java 8. According to Google engineering director Brad Green, 1.3 million developers use AngularJS and 300 thousand are already using the soon to be released Angular 2. After working with Angular 2 for the last 10 months I believe its impact on the JavaScript community will rival that of the Spring framework on Java.

In this article I’ll provide a high-level overview of the Angular 2 framework. Ordina JWorks Tech Blog. Introduction Ideally, the whole application should be a tree of components that implement clearly defined inputs and outputs, and minimize two-way data binding. 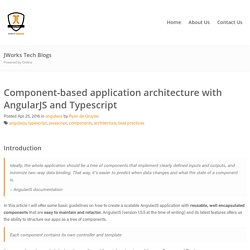 That way, it’s easier to predict when data changes and what the state of a component is. – AngularJS documentation In this article I will offer some basic guidelines on how to create a scalable AngularJS application with reusable, well encapsulated components that are easy to maintain and refactor. AngularJS (version 1.5.5 at the time of writing) and its latest features offers us the ability to structure our apps as a tree of components. Each component contains its own controller and template It can even have its own (relative) routing configured if you take advantage of the new Component Router. Building Custom HTML5 Video Playback with AngularJS - Angularjs Tutorial - Angular Tutorial. Creating REST API using NodeJS and consuming in AngularJS – AngularCode – AngularJS Projects with Demo and Download.

In most of the applications we need to talk to some kind of database. 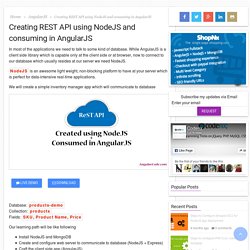 While AngularJS is a client side library which is capable only at the client side or at browser, now to connect to our database which usually resides at our server we need NodeJS. NodeJS is an awesome light weight, non-blocking platform to have at your server which is perfect for data-intensive real-time applications. We will create a simple inventory manager app which will communicate to database Live Demo Download Database: products-demo Collection: products Fields: SKU, Product Name, Price. Build a NodeJS stack with TypeScript, ExpressJS, MongoDB, AngularJS - Borja Refoyo. I’m writing this post to those who want to start a new Node.js project and also wants to understand how it works and connects all the elements, without using a preset stack. 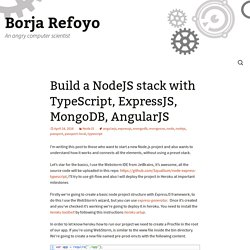 Let’s star for the basics, I use the Webstorm IDE from JetBrains, it’s awesome, all the source code will be uploaded in this repo: I’ll try to use git-flow and also I will deploy the project in Heroku at important milestones Firstly we’re going to create a basic node project structure with ExpressJS framework, to do this I use the WebStorm’s wizard, but you can use express-generator.

Once it’s created and you’ve checked it’s working we’re going to deploy it in heroku. You need to install the heroku toolbelt by following this instructions heroku setup. In order to let know heroku how to run our project we need to create a Procfile in the root of our app. Angular: Angular 2 + React Native. You may have felt the tremors reverberating from the bowels of Twitter or elsewhere about writing pure Native mobile apps in JavaScript. 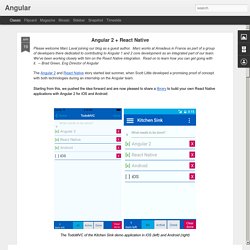 This is not hybrid, Cordova or webviews. These are truly native, 60fps mobile applications written with JavaScript. But that leaves one wondering: If there is no webview, how can I re-use my application code between the web and my mobile app? The answer is you need a JavaScript framework smart enough to do it, and a mobile runtime powerful enough to support it. Learn AngularJS For .Net Developers From Scratch. Enroll Now (at 50%Off) : DescriptionQ: Are you an Asp.Net (MVC or Web APIs) web developer and want to upgrade your profile with AngularJS? 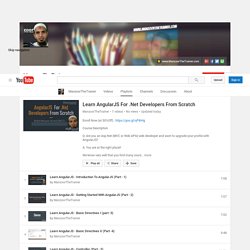 A: You are at the right place!! We know very well that you find many courses on AngularJS and many courses on Asp.Net. But the problem comes when you want to mix these two technologies.Yes! We need a course that teaches AngularJS for those developers who have been working on Asp.Net technologies (MVC or WebAPIs) and want to upgrade their profile with new client side web development javascript framework i.e., AngularJS.So, this course is for an Asp.Net web developer and it is straight to the point with less theory and more real-time implementation scenarios.What are the requirements? A Fast Angular 2 Setup with Components and the Component RouterTelerik Developer Network. Angular 2 is nearing release candidate. 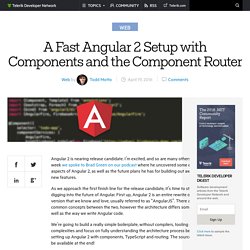 I’m excited, and so are many others. Last week we spoke to Brad Green on our podcast where he uncovered some exciting aspects of Angular 2, as well as the future plans he has for building out awesome new features. As we approach the first finish line for the release candidate, it’s time to start digging into the future of Angular. Setting Up an Angular 2 Environment Using Typescript, Npm and Webpack - EloquentWebApp. AngularJS User Authentication with OAuth 2.0 and PubNub Access Manager. Welcome back to Part 5 of our PubNub series on how to build a complete chat app with PubNub’s AngularJS SDK. 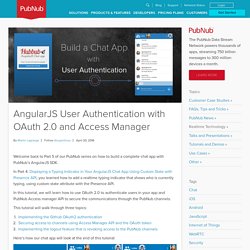 In Part 4: Displaying a Typing Indicator in Your AngularJS Chat App Using Custom State with Presence API, you learned how to add a realtime typing indicator that shows who is currently typing, using custom state attribute with the Presence API. In this tutorial, we will learn how to use OAuth 2.0 to authenticate users in your app and PubNub Access manager API to secure the communications through the PubNub channels. This tutorial will walk through three topics: Here’s how our chat app will look at the end of this tutorial: Application Architecture Overview In the app, we will use the Github OAuth provider to log in users. Below is a schema of the flow we are going to implement in the application: 1. AngularJS. Upload Tommy Rosey Loading...

Working... ► Play all AngularJS Tommy Rosey29 videosNo viewsUpdated today. Angular: 5 Rookie Mistakes to Avoid with Angular 2. You may have felt the tremors reverberating from the bowels of Twitter or elsewhere about writing pure Native mobile apps in JavaScript. This is not hybrid, Cordova or webviews. These are truly native, 60fps mobile applications written with JavaScript. But that leaves one wondering: If there is no webview, how can I re-use my application code between the web and my mobile app?

The answer is you need a JavaScript framework smart enough to do it, and a mobile runtime powerful enough to support it. Angular 2 and Typescript - Lunch & Learn. Unit Testing Directive Scope - angularjs Video Tutorial #free. John Lindquist: If I want to test the scope of the directive I can do something like, "Should respond to a click. " And then when I click on the element I'm going to use a browser trigger utility which is actually shipped within Angular JS source code so I'll say "Click. " Once I trigger that, I expect the scope clicked to be true.

This scope is simply the scope that I injected into the element and I can just expect it to be true if I say, "Element bind click," and then, "Scope click is true. " AngularJS Quiz for beginners. AngularJS. Upload brian rosado Loading... Working... Upload Files To Node.js Using Angular 2. When I build web applications, my least favorite part is always in the realm of file uploads. They are often complicated to do and take a lot of time. Pretty much every web application lately, regardless of what it is, requires file uploads, even if it is just to upload a profile picture.

Since I’m all about Angular 2 lately, I figured it would be great to show how to upload images (or any file) to a back-end. In this particular example I’m using Node.js. Some things to be clear about up front. This tutorial will be broken up into two parts: GitHub - mgechev/angular2-style-guide: Community-driven set of best practices and style guidelines for Angular 2 application development. Angular 2 and the future of HTML5 apps - O'Reilly Media. Welcome back. Build Truly Native Mobile Apps with Angular. An Introduction to AngularJS Style Guides. This article was peer reviewed by Tom Greco, Divy Tolia and Rabi Kiran.

Thanks to all of SitePoint’s peer reviewers for making SitePoint content the best it can be! Angular 2 Full App Tutorial - Weather App - #3 Create first Components. Exploring Angular 1.5: Lifecycle Hooks. Mar 29, 2016 - Updated: Mar 29, 2016 - 7 minute read Angular 1.5 has been finally released and it’s more powerful than ever before! Angular-styleguide/a1 at master · johnpapa/angular-styleguide. Angular 2 Tutorial for Beginners: Learn Angular 2 from Scratch. Angular 2 and the future of HTML5 apps. Test a modal dialog in AngularJS with Mocha, Chai, Sinon and BardJS. I’m creating this post because I feel there’s not much information about this subject online, so if anyone besides me can use this, I can feel satisfied. Creating Specialized HTTP Clients In Angular 2 Beta 8. Angular 2 - Typescript code coverage with Istanbul - devcross.net. One of the important things when you switch to a new framework, like Angular 2, is testing.

And one of the important things in testing is code coverage.TL;DR;Here is the sample project as download. Quickstart: Angular2 with TypeScript and Gulp. Angular2 is around the corner. The 3 Best Resources and Tutorials to Learn AngularJS DebugMe Blog. AngularJS is a great JavaScript framework which is still widely used to easily create all sorts of web applications. Getting Started with Angular 2 using TypeScript. Angular2 Beta, RxJS, TypeScript. 10 Awesome AngularJS Tutorials to Kick-Start your Web Programming Projects.

Easy AngularJS Authentication with Auth0. Quickstart: Angular2 with TypeScript and Gulp: TSLint ~ Codeleak.pl. Static Code Analysis of Angular 2 and TypeScript Projects. Angular-styleguide/README.md at master · johnpapa/angular-styleguide. Angular modules, setters, getters and bootstrapping @toddmotto. Set up unit testing with AngularJS, ES6, JSPM and Karma. TechNet Wiki. Angular 2 Tutorial in JavaScript/ES5. How to do Everything in Angular 2 using vanilla ES5 or ES6. Migrating from Angular 1 to 2: Part 1, Pipes. Why use TypeScript instead of just using JavaScript? - Dave Voyles. Creating a Live Auction App with Angular 2, Node.js and Socket.IO.

The Enterprise Node Company™ Providing Enterprise Node.js Training, Support, Software & Consulting, Worldwide. Introduction to AngularJS. A Deep Dive Into Data: How Forms Are Different in Angular 2.0. AngularJS View And Routing. Promises and design patterns in AngularJS. Building Components for Javascript, React, Angular and Everything Else.