Experimenting with async/await in Node.js 7 Nightly. Getting Started with Node.js and LoopBack - Semaphore. Create a testable, explorable API in minutes using Node.js and the LoopBack framework. 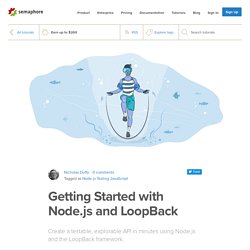 Introduction As APIs become more and more ubiquitous, it becomes increasingly important than ever that your application successfully delivers production quality APIs to your users in a fast and efficient manner. Node.js and LoopBack are here to help you do just that. LoopBack is a highly-extensible, open-source Node.js framework that enables you to create dynamic end-to-end REST APIs with little or no coding. Node.js + Express.js Walkthrough Part 1. Node.js Enterprise Conversations - Episode 5 Groupon. GitHub - KunalKapadia/express-mongoose-es6-rest-api: A boilerplate application for building RESTful APIs Microservice in Node.js using express and mongoose in ES6 with code coverage.

Refactoring a Basic, Authenticated API with Node, Express, and Mongo. In a previous series, I was attempting to break down building a full stack JavaScript application. 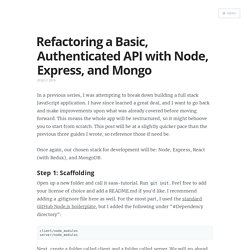 I have since learned a great deal, and I want to go back and make improvements upon what was already covered before moving forward. This means the whole app will be restructured, so it might behoove you to start from scratch. Josh Emerson - Node.js Live London. Node JS Architecture - Single Threaded Event Loop - JournalDev. Today we will look into Node JS Architecture and Single Threaded Event Loop model. 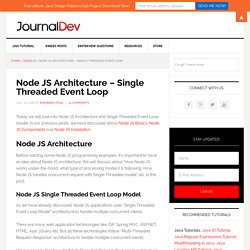 In our previous posts, we have discussed about Node JS Basics, Node JS Components and Node JS installation. Before starting some Node JS programming examples, it’s important to have an idea about Node JS architecture. Node Hero - How to Deploy Node.js with Heroku or Docker. This article is the 12th part of the tutorial series called Node Hero - in these chapters, you can learn how to get started with Node.js and deliver software products using it. 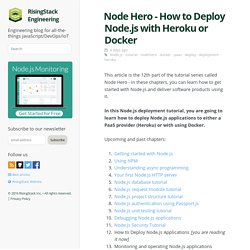 In this Node.js deployment tutorial, you are going to learn how to deploy Node.js applications to either a PaaS provider (Heroku) or with using Docker. Upcoming and past chapters: Deploy Node.js to a PaaS. GitHub - DimitriMikadze/node-redux-auth: Token authentication system using Node, Mongo, React, Redux. Node.js Tutorial #04 What are Node Modules. 10 Tips For Optimizing Node.js Applications - Jscrambler BlogJscrambler Blog. In this post you will learn 10 useful optimization tips to perform in a Node.js application. 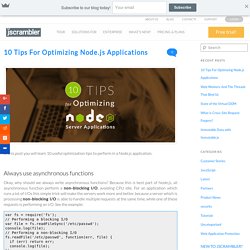 Always use asynchronous functions Okay, why should we always write asynchronous functions? Because this is best part of Node.js, all asynchronous function perform a non-blocking I/O, avoiding CPU idle. For an application which runs a lot of I/Os this simple trick will make the servers work more and better, because a server which is processing non-blocking I/O is able to handle multiple requests at the same time, while one of these requests is performing an I/O. See the example: What is Connect module in Node.js? GitHub - devTristan/simple-postgres: a minimal postgres interface for node. GitHub - ratneshsinghparihar/Node-Data: Node-Data is a Node.js javascript framework where all back end concerns are wrapped in annotations.

GitHub - holyjs/holyjs: HolyJS - NodeJS Server Project Starter. Developing desktop applications with Electron and Bozon. A pretty cool and ambitious idea of writing non-web applications with web technologies is all over the place nowadays. 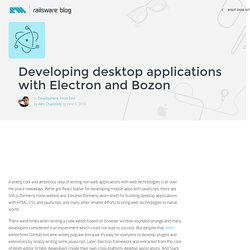 We’ve got React Native for developing mobile apps with JavaScript, there are NW.js (formerly node-webkit) and Electron (formerly atom-shell) for building desktop applications with HTML, CSS and JavaScript, and many other smaller efforts to bring web technologies to native world. There were times when writing a code editor based on browser window sounded strange and many developers considered it an experiment which could not lead to success. Building a Review App with Ionic 2, MongoDB & Node. Throughout your adventures in web and mobile development, you may have heard of the MEAN stack, which (aside from sounding pretty badass) stands for MongoDB, Express.js, Angular, and Node.js. 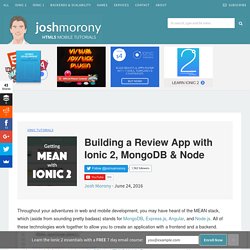 All of these technologies work together to allow you to create an application with a frontend and a backend. In this tutorial we will be creating a simple review application in Ionic 2 powered by the MEAN stack. Node JS, Using APIs, Promises and the File system. Our Task In Guild Wars 2, players can donate items to a bank to help build up the guild’s headquarters, or “Guild Hall”. 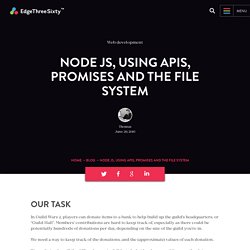 Members’ contributions are hard to keep track of, especially as there could be potentially hundreds of donations per day, depending on the size of the guild you’re in. A TDD Approach to Building a Todo API Using Node.js and MongoDB - Semaphore. Learn how to develop a Todo API with Node.js, MongoDB, Mocha and Sinon.js, using the test-driven development approach. 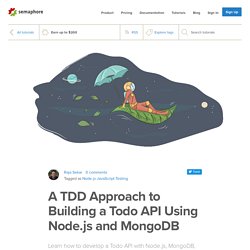 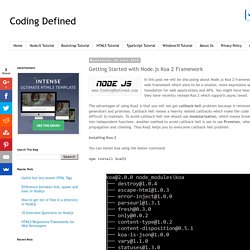 Koa is a new web framework which aims to be a smaller, more expressive and more robust foundation for web applications and APIs. You might have heard about Koa, but they have recently release Koa 2 which supports async/await. The advantages of using Koa2 is that you will not get callback hell problem because it removes it by combining generators and promises. Callback hell means a heavily nested callbacks which make the code unreadable and difficult to maintain. To avoid callback hell one should use modularization, which means breaking the callbacks into independent functions. Node Hero - Debugging Node.js applications. This article is the 10th part of the tutorial series called Node Hero - in these chapters, you can learn how to get started with Node.js and deliver software products using it. In this tutorial, you are going to learn debugging your Node.js applications using the debug module, the built-in Node debugger and Chrome's developer tools.

Upcoming and past chapters: Introducing Queues in Node.js. John Pettigrew — Scaling A Websocket Application With RabbitMQ. If you know me, then you know I am a Docker fan-boy. Docker offers a lot in terms of tooling. As an attempt to avoid vendor lock-in, I chose to research rkt and some of the features it offers. Rkt is maintained by Coreos. How To Harness The Machines: Being Productive With Task Runners. Task runners are the heroes (or villains, depending on your point of view) that quietly toil behind most web and mobile applications. Task runners provide value through the automation of numerous development tasks such as concatenating files, spinning up development servers and compiling code.

In this article, we’ll cover Grunt, Gulp, Webpack and npm scripts. We’ll also provide some examples of each one to get you started. Near the end, I’ll throw out some easy wins and tips for integrating ideas from this post into your application. Building Real-time Apps with Websockets & Server-Sent Events. This article was peer reviewed by Craig Bilner and Dan Prince. Thanks to all of SitePoint’s peer reviewers for making SitePoint content the best it can be! An important part of writing rich internet applications is reacting to data changes. Consider the following quote by Guillermo Rauch, taken from his 2014 BrazilJS talk, The 7 Principles of Rich Web Applications. When data changes on the server, let the clients know without asking. Building a WebRTC Video Chat Application with PeerJS.

This article was peer reviewed by Panayiotis Velisarakos and Ravi Kiran. Thanks to all of SitePoint’s peer reviewers for making SitePoint content the best it can be! With the advent of WebRTC and the increasing capacity of browsers to handle peer-to-peer communications in real-time, it’s easier than ever to build real-time applications. Using WebSockets on Heroku with Node.js. 10 Areas Where Tooling Makes Node.js Developers More Productive, Part 1 - Node.js plays in the big leagues thanks to them. ES Modules and Node.js: Hard Choices. What is the best 'full stack web framework' (with scaffolding, MVC, ORM, etc.) based on Node.js / server-side JavaScript? - Quora. Real-time Web with Node.js - Wrong description on level 6 challenge 8 (6.8) - Node.js - Code School Forum. Node Hero - Node.js Unit Testing Tutorial. Build an Online Store With MongoDB, Node.js, and Elasticsearch - DZone Database.