Why Other People Wreck Brainstorms (And How To Stop Them) If you’re a first-time investor with, say, $15,000 in savings, you have plenty of options these days. 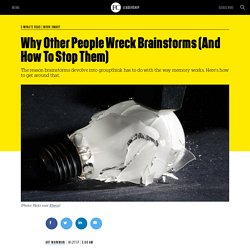 The Acceleration Factor. A company’s performance critically depends on its teams. 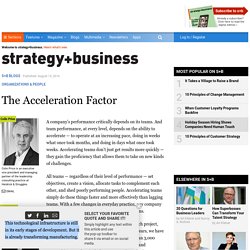 And team performance, at every level, depends on the ability to accelerate — to operate at an increasing pace, doing in weeks what once took months, and doing in days what once took weeks. Accelerating teams don’t just get results more quickly — they gain the proficiency that allows them to take on new kinds of challenges. Bullet Journal Updated Overview.

Why the Bullet Journal Works: It Soothes Your Panicky Mind. A sad truth about productivity aspirations: Sometimes, maintaining a system that’s supposed to make your life easier can feel like the hardest part. 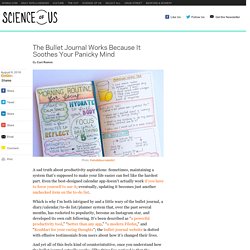 Even the best-designed calendar app doesn’t actually work if you have to force yourself to use it; eventually, updating it becomes just another unchecked item on the to-do list. Which is why I’m both intrigued by and a little wary of the bullet journal, a diary/calendar/to-do list/planner system that, over the past several months, has rocketed to popularity, become an Instagram star, and developed its own cult following. It’s been described as “a powerful productivity tool,” “better than any app,” “a modern Filofax,” and “KonMari for your racing thoughts”; the bullet-journal website is dotted with effusive testimonials from users about how it’s changed their lives. And yet all of this feels kind of counterintuitive, once you understand how the bullet journal actually works. 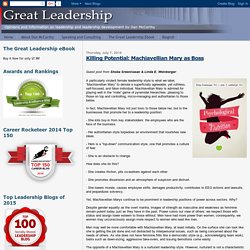 Weinberger: A particularly virulent female leadership style is what we label, “Machiavellian Mary” to denote a superficially agreeable, yet ruthless, self-focused, and false individual. Machiavellian Mary is admired for playing well in the “male” game of pyramidal hierarchies: pleasing to those on top and controlling, micro-managing and authoritarian to those below. In fact, Machiavellian Mary not just toxic to those below her, but to the businesses that promote her to a leadership position: Killers of Corporate Life. There are 2 killers of corporate life – speed and politics. 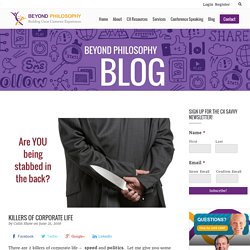 Let me give you some background. Before setting up Beyond Philosophy I spent most of my career working in large corporate companies, climbing the ladder of success. I reached the exalted heights of SVP leading a team of 3,500 people globally before I left to start Beyond Philosophy, a customer experience consultancy, back in 2002. Company Politics In my last role I was often asked by friends what I did for a living – I would reply “I play chess”. Speed – or lack thereof! 1 Simple Trick to Be Happier at a Job You Hate. OODA Loops - Decision-Making Skills Training from MindTools.com. Understanding the Decision Cycle © iStockphotovesilvio Learn the decision-making techniques of a fighter pilot. 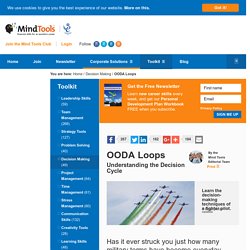 Has it ever struck you just how many military terms have become everyday terms in business-speak? War and business are often compared and contrasted. As well as "fighting off threats" or "engaging in a price war", we talk about "gathering intelligence", "making a pre-emptive strike", and even trying to "out-maneuver" the competition. It can be fun to read books like The Art of War, written in 6th Century China by Sun Tzu, and to think about how these can be applied to business strategy. Boyd developed his model after analyzing the success of the American F-86 fighter plane compared with that of the Soviet MIG-15. This improved field of vision gave the pilot a clear competitive advantage, as it meant he could assess the situation better and faster than his opponent.

GTD - Getting Things Done. How to Immediately Improve Your Powers of Persuasion. Dr. 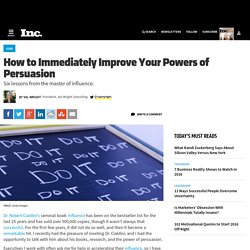 Robert Cialdini's seminal book Influence has been on the bestseller list for the last 25 years and has sold over 500,000 copies, though it wasn't always that successful. For the first few years, it did not do so well, and then it became a remarkable hit. I recently had the pleasure of meeting Dr. Cialdini, and I had the opportunity to talk with him about his books, research, and the power of persuasion. Executives I work with often ask me for help in accelerating their influence, so I have distilled Cialdini's insights into six powerful lessons: 1.

When you are the smartest person in a group, you don't seek out understanding from others or ask for their advice. The four tiers of engagement: What Silicon Valley taught me about collaboration and time management. What You Know That You Don’t Know Can Hurt You. On the morning of March 22, 2016, at the beginning of rush hour, two bombs ripped through the busy departure terminal at Brussels Airport. 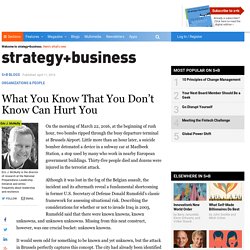 Little more than an hour later, a suicide bomber detonated a device in a subway car at Maelbeek Station, a stop used by many who work in nearby European government buildings. Thirty-five people died and dozens were injured in the terrorist attack. Although it was lost in the fog of the Belgian assault, the incident and its aftermath reveal a fundamental shortcoming in former U.S. Secretary of Defense Donald Rumsfeld’s classic framework for assessing situational risk. Why rudeness at work is contagious and difficult to stop. Most people can relate to the experience of having a colleague inexplicably treat them rudely at work. 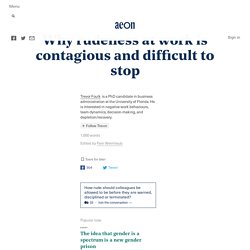 You’re not invited to attend a meeting. A co-worker gets coffee – for everyone but you. Open-plan offices make employees less productive, less happy, and more likely to get sick. This week as Donald Trump was crowned the Republican presidential nominee, a ghost from his past also emerged into the spotlight. In a profile for the New Yorker, Tony Schwartz, the ghostwriter for his 1987 book The Art of the Deal, expressed regret over co-creating a mythical Donald Trump. The depiction spawned a reality TV show, The Apprentice, which made Trump a household name and painted him as an embodiment of the American Dream. Both the book and TV show were incidental, pivotal events that helped the real estate tycoon secure the nomination.

“Trump’s self-portrayal as a Horatio Alger figure buttressed his populist appeal in 2016,” wrote the New Yorker’s Jane Mayer. “But his origins were hardly humble.” The Art of the Deal fits a specific genre of business and self-help books—the ones that gloss over the role of privilege in success. Own-it-7-ways-oprah-creates-personal-power. Last week, entrepreneur and entertainer Oprah Winfrey again made Forbes's list of the world's most powerful women (#12) and the list of richest self-made women (#5). 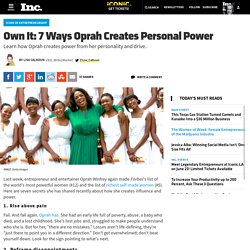 Here are seven secrets she has shared recently about how she creates influence and power. 1. Rise above pain Fail. And fail again. The Art of Simple Questions: How Simple Questions Lead to Great Innovations. 10 Questions to Ask When You Design or Redesign a Process. How to Manage Chronic Complainers. Chronic complainers are a fact of working life, but that doesn't mean you must suffer as they drain your time and energy. Being exposed to too much complaining--i.e., 30 minutes or more--is bad not only for your health but also for your ability to tackle problems. "The brain works like a muscle more than we thought," Trevor Blake, a serial entrepreneur and author of Three Simple Steps: A Map to Success in Business and Life, tells Inc. columnist Minda Zetlin.

"So if you're pinned in a corner for too long listening to someone being negative, you're more likely to behave that way as well. " Here are three simple ways to cope with whiners and maintain your own positive attitude. Change the subject. It's no use trying to convince chronic whiners things aren't as bad as they think, writes Martha McCarty in iaap, an online resource for administrative professionals. Express sympathy. What's Your Cultural Profile? Are-you-a-high-performer-or-a-workaholic-5-ways-to-tell. Productive and busy, we all know, are two fundamentally different things.

The trouble is they can sometimes look a lot like each other, at least on the surface. That makes it easy for entrepreneurs to mistake their own packed schedules--or those of their employees--for evidence of exceptional achievement. What's needed is a gut check--a quick list of questions to help you determine if a person is a genuine high performer, working hard in a sustainable way toward well-defined and important goals, or a workaholic, who is burning himself out running around endlessly without a clear focus. 5 Silly Work Mistakes that can Derail your Career. Become a Company That Questions Everything - Warren Berger. Quantify How Much Time Your Company Wastes - Ryan Fuller. By Ryan Fuller | 8:00 AM May 28, 2014 Forty-four hours of meetings per week. Forty-six average attendees per meeting.

High Performance is not the same as High Potential. Do you deserve to be appreciated at work? The Mistake Most CEOs Don't Realize They're Making. What 5 insights can you learn from the single best book on management. Keep Your Name Off That Layoff List - Jack Zenger and Joseph Folkman. By Jack Zenger and Joseph Folkman | 11:35 AM October 3, 2013. Nine Things Successful People Do Differently - Heidi Grant Halvorson. Learn more about the science of success with Heidi Grant Halvorson’s HBR Single, based on this blog post. Why have you been so successful in reaching some of your goals, but not others? How to enforce deadlines effectively. When employees miss deadlines, bosses tend to gravitate to one of two extremes. Either they freak out and fire the offender, or they do nothing. Chances are, they want to do the former but then end up doing the latter. The problem is, doing nothing at all to enforce deadlines is a terrible practice since it reinforces bad behavior.

Four Areas Where Senior Leaders Should Focus Their Attention - Peter Bregman. It was getting close to lunch time and the people seated around the table — the CEO and seven of his direct reports — were clearly getting antsy. 10-things-extraordinary-people-say-every-day. Want to make a huge difference in someone's life? Here are things you should say every day to your employees, colleagues, family members, friends, and everyone you care about: Three tips to improve your listening skills. The executive guide to listening Danger ahead: Executive not listening.

A road sign similar to that might be useful for the corridors of a company where senior managers view conversation as one-way affairs, and refuse to listen to others.