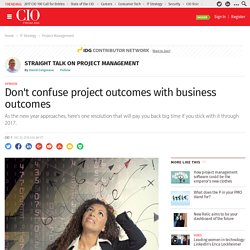 It's amazing how many really good CIOs, project managers, sponsors and stakeholders do! In their 2016 Pulse of the Profession report, 83 percent of organizations lacked maturity with what the Project Management Institute (PMI) calls "benefits realization" and only about half indicated that project benefits are well aligned with business strategic goals. Unpicking these statistics reveals something of a trend. It seems a lot of IT projects are either failing or not reaching their full potential because key people are wearing what I'm going to call "outcome blinkers. " I'll give you an example. Earlier this year I was called by a CIO friend asking for me to take a look at a project that he didn't "feel" was delivering. "What's the intended outcome? " My friend walked me through the software program and app that was being designed. 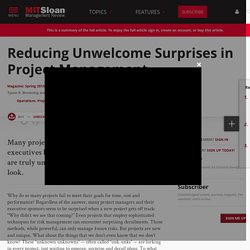 These five project subsystems have been noted in several prior works, including T.R. Browning, E. Fricke and H. Negele, “Key Concepts in Modeling Product Development Processes,” Systems Engineering 9, no. 2 (summer 2006): 104-128; S.D. 6 Tips to Become a More Collaborative Project Manager - LiquidPlanner. Do you want to be an effective team leader? 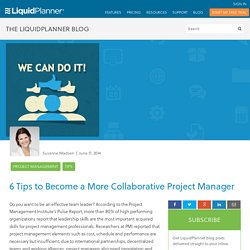 According to the Project Management Institute’s Pulse Report, more than 80% of high performing organizations report that leadership skills are the most important acquired skills for project management professionals. Researchers at PMI reported that project management elements such as cost, schedule and performance are necessary but insufficient; due to international partnerships, decentralized teams and working alliances, project managers also need negotiation and collaboration skills. So how do you become a more collaborative project manager? Below are six tips that will help you get started. 1. 2. 3. 4. 5. 6. Do you have another tip to become an expert collaborator? Related stories:Hotlist: How to Be a Great Boss6 Ways Online Project Management Tools Improve Collaboration5 Steps to Build Confidence in Your Team Members Summary.

Organisation Change Management. Quantify How Much Time Your Company Wastes - Ryan Fuller. By Ryan Fuller | 8:00 AM May 28, 2014 Forty-four hours of meetings per week. 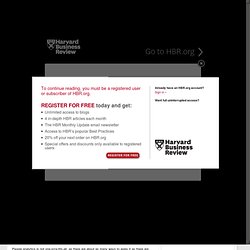 Forty-six average attendees per meeting. Twenty-two hours of e-mail per week. These numbers are not a dramatization; they are the actual year-long averages for a large technology company’s vice president. And at the managerial level, things don’t look much better: One IT manager, for example, spends 35 hours a week in meetings, sends emails during 85% of those meetings, and interfaces with an average of eight different teams each day. There are so many initiatives, goals, people, customers, and vendors competing for our time that it’s extraordinarily challenging to just simply focus. Equipped with this information, companies can make decisions about how to better allocate what a recent HBR article (using VoloMetrix data) called their “scarcest resource:” time. People analytics is not one-size-fits-all, as there are about as many ways to apply it as there are types of organizations themselves.

The IT Project That Brought a Bank to Its Knees - Joe Peppard, and John Thorp. By Joe Peppard and John Thorp | 9:00 AM May 15, 2014 Sir Christopher Kelly, a former British senior civil servant, recently produced a damning report, which reviewed the events that led to the £1.5 billion capital shortfall announced by the U.K.’s Co-operative Bank in June 2013. 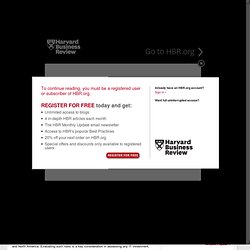 This shortfall resulted in its parent, Co-operative Group, ceding control of the bank to bondholders, including U.S. hedge funds. One section highlights the problems the bank encountered as it attempted to replace its core banking systems, a program that was cancelled in 2013 at a cost of almost £300 million. “The weight of evidence supports a conclusion that the program was not set up to succeed,” Sir Christopher writes. “It was beset by destabilizing changes to leadership, a lack of appropriate capability, poor coordination, over-complexity, underdeveloped plans in continual flux, and poor budgeting.