9 signs you're a bad manager — even if it doesn't feel like it. "Supervision is a critical function of leadership that is often overlooked," writes Rita Sever in her book "Supervision Matters. 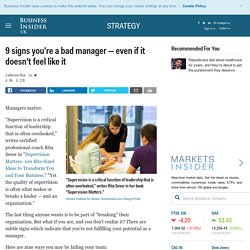 " Strelka Institute for Media, Architecture and Design/Flickr Managers matter. "Supervision is a critical function of leadership that is often overlooked," writes certified professional coach Rita Sever in "Supervision Matters: 100 Bite-Sized Ideas to Transform You and Your Business. " "Yet the quality of supervision is often what makes or breaks a leader — and an organization. " The last thing anyone wants is to be part of "breaking" their organization. Here are nine ways you may be failing your team:

Respect in my Workplace Was a Fact: Then Here's What Happened. Creating Management Processes Built for Change. References (9) 1. 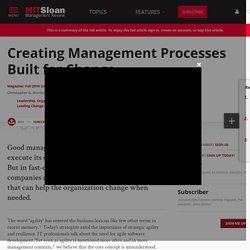 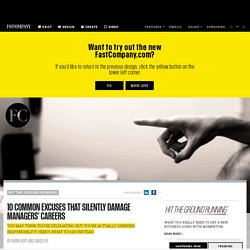 So you're taking on new projects and delegating certain tasks to others. You think you're getting the hang of it, but then you make a remark that seems to rub someone the wrong way—and you aren't sure why. Being decisive and knowing how to say no are important leadership skills, but handled the wrong way, they can come off as excuses that can damage your career. Managers need to lead with confidence, humility, and a long-term focus on building relationships.

People. Negotiation. Meetings. Coaching. Performance Evaluation. Upward feedback. Ethics. IT. Governance. 10 Common Excuses That Silently Damage Managers' Careers. 9 Habits That Lead to Terrible Decisions. Several years ago we came up with a great idea for a new leadership-development offering we thought would be valuable to everyone. 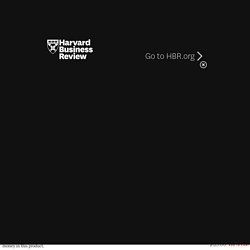 We had research demonstrating that when people embarked on a self-development program, their success increased dramatically when they received follow-up encouragement. We developed a software application to offer that sort of encouragement. People could enter their development goals, and the software would send them reminders every week or month asking how they were doing, to motivate them to keep on going. Are You Sure You Want to Be a Manager? Renowned restaurateur Danny Meyer likes to tell newly promoted supervisors that they have just been given the “gift of fire.” 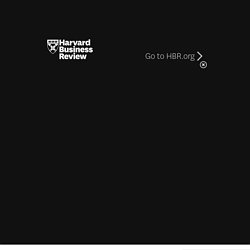 As a boss they now have a new and potent power, but Meyer wants to ensure they understand the appropriate — and inappropriate — uses of this gift. Fire, Meyer explains, can be used to warm and comfort. Throwing the Right Switches: How to Keep Your Executive Career on Track. 8 Symptoms Of A Toxic Command Climate. A great deal of time and effort has been spent by military leaders trying to seek out and prevent horrible command climates. 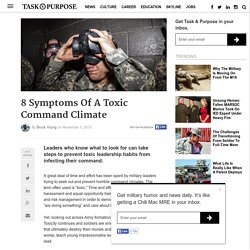 The term often used is “toxic.” Time and effort is spent on sexual harassment and equal opportunity training, suicide awareness, and risk management in order to demonstrate that unit leaders “are doing something” and care about their soldiers. Yet, looking out across Army formations, not much has changed. 3 Management Mistakes You Need to Squash Right Now. 5 Things Bully Bosses Must Change. THE ANTIDOTE TO MANAGEMENT FAILURE. What to Do When Managers Behave Badly. Boost Your Team’s Performance with a Task Map - Management Tip of the Day - April 25, 2014. Stop Being So Nice. It's Hurting Your Company. What's your gut reaction when an employee makes a poor suggestion during a meeting? 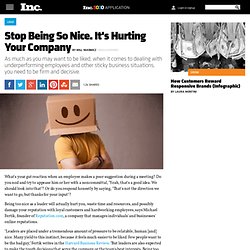 Do you nod and try to appease him or her with a noncommittal, "Yeah, that's a good idea. We should look into that"? Or do you respond honestly by saying, "That's not the direction we want to go, but thanks for your input"? Being too nice as a leader will actually hurt you, waste time and resources, and possibly damage your reputation with loyal customers and hardworking employees, says Michael Fertik, founder of Reputation.com, a company that manages individuals' and businesses' online reputations.

How Not to Choose a Manager. Building a High-Trust Culture #4: Everyone’s Accountable. Strengthen Your Strategic Thinking Muscles - Liane Davey. By Liane Davey | 1:00 PM January 21, 2014 Have you been told that you need to be more strategic? 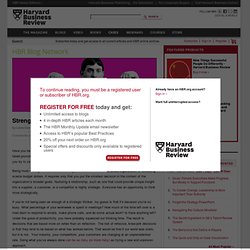 Whether through 360 feedback or after a failed promotion attempt, being told that you aren’t strategic enough really stings. Worse is when you try to clarify what “more strategic” would look like and get few tangible suggestions. Being more strategic doesn’t mean making decisions that affect the whole organization or allocating scarce budget dollars. It requires only that you put the smallest decision in the context of the organization’s broader goals. Research: Middle Managers Have an Outsized Impact on Innovation - Ethan Mollick. By Ethan Mollick | 11:00 AM September 12, 2013 Just the mention of “middle managers” is enough to make people’s eyes roll back. 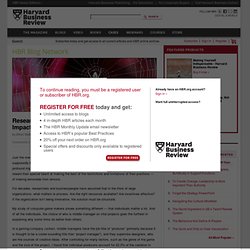 But these supposedly boring cogs of the corporation, these objects of derision in Dilbertland, can have a profound impact on innovation and performance. Companies need to pay attention to them and reward their special talent at making the best of the restrictions and limitations of their positions — of making lemonade from lemons. For decades, researchers and businesspeople have assumed that in the thick of large organizations, what matters is process. How Do I Submit a Business Case that Engages and Compels? - John Kotter.

Use Doctrine to Pierce the Fog of Business - Mark Bonchek and Chris Fussell. The “fog of war” describes the uncertainty faced by soldiers in the field of battle. In today’s markets, business leaders face a similar challenge: how to pierce through the “the fog of business.” The traditional tools of management — strategy and planning — are no longer sufficient. Strategy and planning are like high beams on a car; they just bounce off the fog. Strategy doesn’t give employees enough guidance to know how to take action, and plans are too rigid to adapt to changing circumstances. Decision Making, Top Gun Style - Mark Bonchek and Chris Fussell. By Mark Bonchek and Chris Fussell | 9:00 AM September 12, 2013 When Tom Cruise’s “Maverick” inverted his F-14 fighter jet and gave “the bird” to his Soviet opponent in the opening scene of 1986′s Top Gun, Cruise assured himself a lighthearted place in the history of the Cold War. 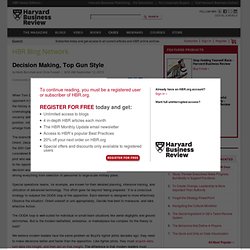 What that scene also did, however, was provide one of cinematography’s great examples of a key concept of air-to-air combat: the OODA loop. Maverick’s uncanny ability to move rapidly through a complex decision cycle, always ending up in a superior position, not only made for great cinema but also represented one of the more complex theories to emerge from 20th Century military thinking. The brainchild of now-deceased Air Force Colonel (ret) John Boyd, OODA (short for Observe, Orient, Decide, and Act) became a cornerstone of training for air-to-air combat in the latter half of the 20th Century. Act Fast, but Not Necessarily First - Frank Partnoy.

Speed is killing our decisions. The crush of technology forces us to snap react. We blink, when we should think. E-mail, social media, and 24-hour news are relentless. Our time cycle gets faster every day. Yet as our decision-making accelerates, long-term strategy becomes even more crucial. No one understood the challenge of time-pressured decision-making better than military strategist John Boyd, arguably the greatest fighter pilot in American history.

As a pilot, Boyd advocated lightweight, maneuverable aircraft. Boyd saw these pilot tactics as a metaphor for longer-term strategy. The ultimate goal of OODA is to act fast, but not necessarily first.