Feds public corruption probe: 17 avoided prison. While former Detroit Mayor Kwame Kilpatrick spends 28 years in prison for public corruption, many of the people who helped put him behind bars also broke the law — but they're free. 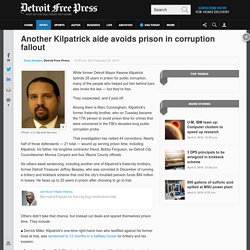 They cooperated, and it paid off. Among them is Marc Cunningham, Kilpatrick's former fraternity brother, who on Tuesday became the 17th person to avoid prison time for crimes that were uncovered in the FBI's decades-long public corruption probe. That investigation has netted 44 convictions. Nearly half of those defendants — 21 total — wound up serving prison time, including Kilpatrick, his father, his longtime contractor friend, Bobby Ferguson, ex-Detroit City Councilwoman Monica Conyers and four Wayne County officials. Six others await sentencing, including another one of Kilpatrick's fraternity brothers, former Detroit Treasurer Jeffrey Beasley, who was convicted in December of running a bribery and kickback scheme that cost the city's troubled pension funds $84 million in losses. 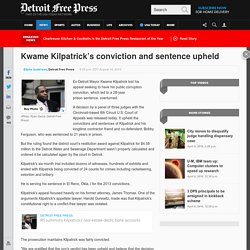 A decision by a panel of three judges with the Cincinnati-based 6th Circuit U.S. Court of Appeals was released today. It upheld the convictions and sentences of Kilpatrick and his longtime contractor friend and co-defendant, Bobby Ferguson, who was sentenced to 21 years in prison. But the ruling found the district court’s restitution award against Kilpatrick for $4.58 million to the Detroit Water and Sewerage Department wasn’t properly calculated and ordered it be calculated again by the court in Detroit. Kilpatrick's six-month trial included dozens of witnesses, hundreds of exhibits and ended with Kilpatrick being convicted of 24 counts for crimes including racketeering, extortion and bribery. He is serving his sentence in El Reno, Okla. Kilpatrick's appeal focused heavily on his former attorney, James Thomas. 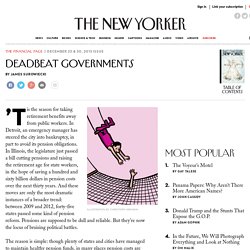 In Detroit, an emergency manager has steered the city into bankruptcy, in part to avoid its pension obligations. In Illinois, the legislature just passed a bill cutting pensions and raising the retirement age for state workers, in the hope of saving a hundred and sixty billion dollars in pension costs over the next thirty years. And these moves are only the most dramatic instances of a broader trend: between 2009 and 2012, forty-five states passed some kind of pension reform. Pensions are supposed to be dull and reliable. But they’re now the locus of bruising political battles. The reason is simple: though plenty of states and cities have managed to maintain healthy pension funds, in many places pension costs are eating up huge chunks of the budget. How did states and cities get into this jam? 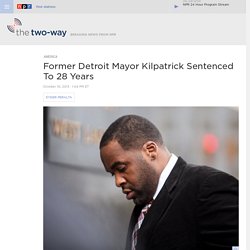 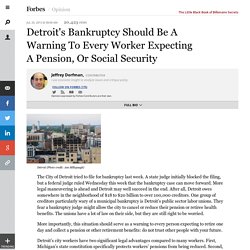 A state judge initially blocked the filing, but a federal judge ruled Wednesday this week that the bankruptcy case can move forward. More legal maneuvering is ahead and Detroit may well succeed in the end. After all, Detroit owes somewhere in the neighborhood of $18 to $20 billion to over 100,000 creditors. One group of creditors particularly wary of a municipal bankruptcy is Detroit’s public sector labor unions. More importantly, this situation should serve as a warning to every person expecting to retire one day and collect a pension or other retirement benefits: do not trust other people with your future.

Detroit’s city workers have two significant legal advantages compared to many workers. For many reasons, Detroit’s bankruptcy, if a judge eventually allows them go through that process, will not set much of a precedent for other cities. Those risks are not small ones.