Alexander McQueen: 'He sewed anger into his clothes’ The trajectory of Lee Alexander McQueen’s life has already passed into the realms of semi-myth, and the tragedy of his leaving of it are guaranteed to send the Met’s visitor numbers stratospheric. 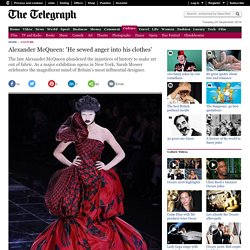 An East End boy who left school at 16 in 1985, he became an apprentice at Anderson & Sheppard on Savile Row and, in a now legendary twist of fate, was only offered a place on the Masters course at Central Saint Martin’s after his talents were spotted when he turned up for a job as a college pattern-cutter. From there, living on the dole, and with flamboyant, aristocratic fashion editor Isabella Blow squawking her enthusiasm for his fierce tailoring, McQueen went on to terrify, insult and amaze the fashion world in shows throughout the Nineties which grappled with elemental forces and displayed astonishing use of technology. In 1996, the self-described “Oik” was recruited by Parisian fashion house Givenchy. Then there is the vast popular significance of Alexander McQueen to be considered.

Olivier Rousteing on Rihanna, Kim Kardashian and the Balmain army. A gorgeous July day in Paris, the haute couture shows are in full swing and the Four Seasons hotel is in glamour lockdown. 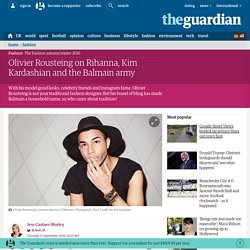 A motorcade of buffed, black, presidential-scale cars lines the kerb outside its street entrance, currently occupied by two women in red-carpet hair and makeup who have paused at the exit for a prolonged session with a selfie stick. Inside, a chandelier the size of a meteorite twinkles above a vast expanse of black and white marble floor, the airy space punctuated by urns crowded with triffid-sized white gladioli, reed slender and supermodel height. In other words, the scene is perfectly set for the entrance of Olivier Rousteing, Balmain’s creative director and Paris fashion’s most glamorous frontman.

Except, of course, he isn’t here yet, because I am 10 minutes early and he – like any self-respecting rock star – will be 20 minutes late. And then here he is. He is ridiculously good-looking. The Balmain aesthetic is tight, bright and leggy. Haters? He works at this. Fashion designers 'must make sample sizes bigger' Image copyright EPA Designers at London Fashion Week should show at least two sample sizes, one of which should be a UK size 12 or above, the Women's Equality Party has said. 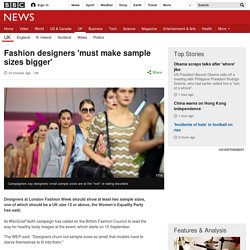 Its #NoSizeFitsAll campaign has called on the British Fashion Council to lead the way for healthy body images at the event, which starts on 15 September. The WEP said: "Designers churn out sample sizes so small that models have to starve themselves to fit into them. " The BFC said it takes the issues the campaign raises "very seriously". A UK size 12 or above is considered "plus-size" by the industry, while sample size clothing worn by models on catwalks tends to be a UK size 4, or a US size zero.

Sophie Walker, leader of the WEP, told the BBC that the campaign aimed to tackle the growing number of women and girls suffering from eating disorders by going to the "root of the problem" - sample sizes from fashion designers. Thinkstock Eating disorders Source: Beat - Beating eating disorders. How do you help girls feel happier? How Zara's founder became the richest man in the world - for two days. Image copyright AFP/Getty Images Browsing the rails at Zara, you might not be aware of this: but there's an 80-year-old grandfather in northern Spain who helped pick out what you're taking to the till. 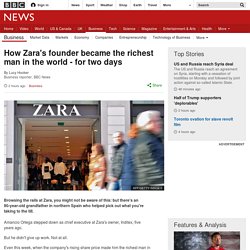 Amancio Ortega stepped down as chief executive at Zara's owner, Inditex, five years ago. But he didn't give up work. Not at all. Even this week, when the company's rising share price made him the richest man in the world for two days, he wasn't ready to retire. Image copyright Getty Images Every day he still makes the 10km journey from his town centre house to the Inditex headquarters, based just outside the coastal town of La Coruna where he first launched the Zara brand. Sometimes he sits down with the Zara Woman design team and they kick around ideas for the coming weeks and months - the new layout for a store, a new design for the upcoming winter collection. This was not Mr Ortega's first time at the top of the tree.

"When Amancio was telling me this, he was terribly emotional. Fashion Show Review, Ready-to-Wear - Autumn 2016. MILAN, Italy — For all that it was a triumphant return to form, Miuccia Prada's menswear show in January turned out to be a mere appetiser for the deeper, richer women's collection she showed tonight.‎ 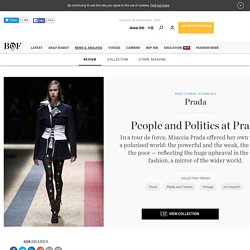 That was partly a reflection of her own feelings: "A woman is so much more complex than a man. She has to be a mother, a lover, a worker, a beauty... " But it was the way the clothes mirrored those multi-facets — and the emotional states that accompany them — that made the show a tour de force. Longtime collaborator Frederic Sanchez’s soundtrack of female singers ran a full drenching gamut, from the fierceness of PJ Harvey, to the pain of Piaf to the chill anomie of Nico, by way of sterling accompaniment. Cara Delevingne Style - Clothes & Fashion Style File.