Versace Official UK Online Store. Ready-to-wear and Accessories for Women and Men. Men's & Women's Luxury Designer Fashion. Designer Luxury Fashion for Men & Women. 10 Most Powerful Luxury Fashion Brands In The World. The luxury market has been growing significantly over the past couple of years and is still continuing on an upwards trend. 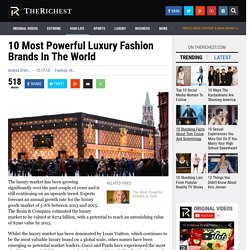 Experts forecast an annual growth rate for the luxury goods market of 5-6% between 2013 and 2015. The Brain & Company estimated the luxury market to be valued at $274 billion, with a potential to reach an astonishing value of $290 value by 2015. Whilst the luxury market has been dominated by Louis Vuitton, which continues to be the most valuable luxury brand on a global scale, other names have been emerging as potential market leaders. Gucci and Prada have experienced the most significant growth. With great growth and potential, brands like Prada, Gucci and Hermes may one day overtake the market. and reach the number one spot. It is believed that Prada and Gucci experienced such high growth in brand value due to an increase in Asian customers, at home and abroad. Read on to find out the Top 10 World’s Most Powerful Luxury Brands. 10. 9. 8. 7. 6. 5. 4. 3. 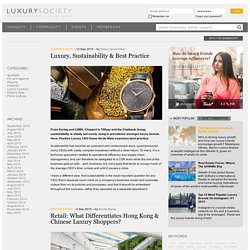 Here, Positive Luxury CEO Diana Verde Nieto examines best practice.Sustainability has become an overused and controversial word, synonymous for many CEOs with costly, complex investment without a clear return. To many, it is a technical specialism related to operational efficiency and supply chain management, and can therefore be delegated to a CSR team while the rest of the business gets on with…well, business. Queen 'helps sell UK luxury brands' The Queen plays a key part in selling Britain's luxury brands abroad, according to Warwick Business School. 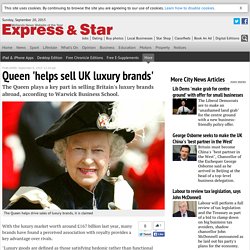 With the luxury market worth around £167 billion last year, many brands have found a perceived association with royalty provides a key advantage over rivals. "Luxury goods are defined as those satisfying hedonic rather than functional needs and our research has found this is an area that Britain enjoys a distinct advantage in," said Professor Qing Wang. "The Queen is a significant reason for this, as a very important factor that makes Britain stand out is that it incorporates tradition and innovation seamlessly. "Put differently, Britain's advantage lies in the so-called soft power, which is defined as the ability to get what you want through attraction rather than through coercion, and the UK's royal heritage is a key part of that. " The research focused on the China, one of the biggest markets for luxury goods.

Louis Vuitton Ranked World's Most Valuable Luxury Brand. In the luxury world, the top dogs are exactly who you might expect them to be. 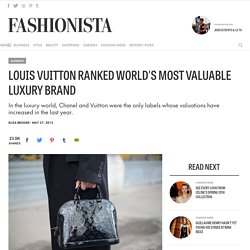 According to a new ranking from the research group Millward Brown and the advertising conglomerate WPP, Louis Vuitton — the crown jewel in the luxury conglomerate LVMH's portfolio — is worth an estimate $24.7 billion, making it the most valuable brand in the sector. To calculate a brand's value, the study looks at corporate earnings, its potential for future earnings and qualitative factors like meaningfulness, distinctiveness and salience that speak to consumers' attitude toward purchasing its products. For brands like Vuitton that are part of a larger company, figuring out that financial value is a matter of figuring out its percentage contribution to overall sales. 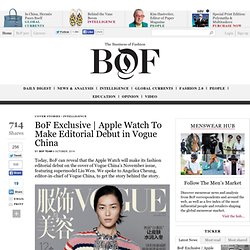 BoF can reveal that the Apple Watch is set to make its editorial debut on the cover of Vogue China’s November issue, out this Monday, featuring Liu Wen. A spread from Vogue China’s November issue | Source: Vogue China It’s the latest in a series of activities that puts fashion at the focus of Apple’s communication strategy. On September 9th, in the middle of New York Fashion Week, the Silicon Valley-based company invited a cadre of fashion editors and bloggers to the unveiling of the Apple Watch, held at its the headquarters in Cupertino, California. Then, during Paris Fashion Week, Apple successfully squeezed itself into a hectic show schedule, staging an exclusive showcase of the new Apple Watch at Colette before attendees including Anna Wintour and Karl Lagerfeld.