Aesthetica Magazine – The Art & Culture Magazine. Promoting art and culture. Culture and tourism Eight out of ten visitors to London say 'culture and heritage' are the reason they chose to come to the city. 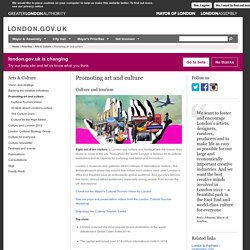 Throughout the world, London is famous for its cultural institutions and its capacity for nurturing new talent and innovation. London’s museums and galleries attract millions of international visitors – the British Museum alone has around five million such visitors each year. London’s West End theatres have an enthusiastic global audience. And our city’s famous live music venues attract audiences, especially young people, from across the UK and beyond. 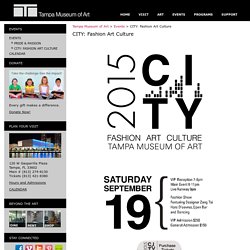 The value of arts and culture to people and society – an evidence review. How Different Cultures Have Changed Fashion. The good thing about the world of fashion is that anything can be considered to be fashion, there are no rules. 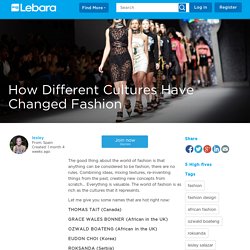 Combining ideas, mixing textures, re-inventing things from the past, creating new concepts from scratch... Everything is valuable. The world of fashion is as rich as the cultures that it represents. Let me give you some names that are hot right now: THOMAS TAIT (Canada) GRACE WALES BONNER (African in the UK) OZWALD BOATENG (African in the UK) EUDON CHOI (Korea) ROKSANDA (Serbia) HUISHAN ZHANG (China) MARQUES ALMEIDA (Portugal) ASTRID ANDERSEN (Denmark) In this list of amazing creative directors, there are two that are actually changing the way we look at our wardrobes: OSWALD BOATENG and ROKSANDA.

Ozwald is guilty of making our Uk guys get into the Italian sense of tailoring. Wearing a well-fitted suit is hot! This Serbian designer came to London to finish her studies in womenswear design and since 2000 she has been bringing the geometric designs into our style. Lesley Salazar. Culture and Fashion - Art, Theatre, Decor, Music, and Travel - BAZAAR. Indian Art - History of India. The major themes of Indian art seem to begin emerging as early as the Harappan period, about 2500 BC. 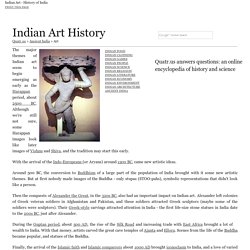 Although we're still not sure, some Harappan images look like later images of Vishnu and Shiva, and the tradition may start this early. With the arrival of the Indo-Europeans (or Aryans) around 1500 BC, came new artistic ideas. Around 500 BC, the conversion to Buddhism of a large part of the population of India brought with it some new artistic themes. But at first nobody made images of the Buddha - only stupas (STOO-pahs), symbolic representations that didn't look like a person. Then the conquests of Alexander the Great, in the 320s BC, also had an important impact on Indian art. During the Guptan period, about 500 AD, the rise of the Silk Road and increasing trade with East Africa brought a lot of wealth to India.

Learn by doing: go see Indian art in a museumMore about Ancient India Bibliography and further reading about Indian art Eyewitness India, by Manini Chatterjee (2002). History of Day of the Dead & the Mexican Sugar Skull Tradition. Day of the Dead is an interesting holiday celebrated in central and southern Mexico during the chilly days of November 1 & 2. 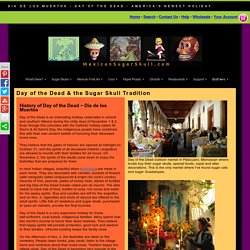 Even though this coincides with the Catholic holiday called All Soul's & All Saint’s Day, the indigenous people have combined this with their own ancient beliefs of honoring their deceased loved ones. They believe that the gates of heaven are opened at midnight on October 31, and the spirits of all deceased children (angelitos) are allowed to reunite with their families for 24 hours. On November 2, the spirits of the adults come down to enjoy the festivities that are prepared for them.

In most Indian villages, beautiful altars (ofrendas) are made in each home. The value of arts and culture to people and society – an evidence review.