Primary Care, It's New Role in the New Decade. This HBR article from Kaiser Permanente “Managing the Most Expensive Patients”, suggests a very clear pathway to reduce some of the unnecessary waste in the US healthcare system using “leveraged primary care”, and points to a few small primary care networks that are doing the same thing. 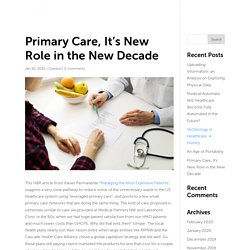 The kind of care proposed is extremely similar to care we provided at Medical Partners NW and Lakeshore Clinic in the 90s, when we had huge patient satisfaction from our HMO patients and much lower costs than GHCPS. Personal Health Records & Control. Your Smartphone Can Help You With Your Insomnia. Do you have difficulties sleeping at night? 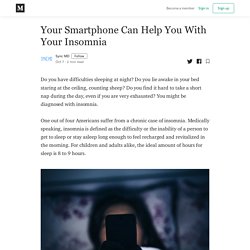 Do you lie awake in your bed staring at the ceiling, counting sheep? Do you find it hard to take a short nap during the day, even if you are very exhausted? You might be diagnosed with insomnia. One out of four Americans suffer from a chronic case of insomnia. Medically speaking, insomnia is defined as the difficulty or the inability of a person to get to sleep or stay asleep long enough to feel recharged and revitalized in the morning.

There are still no specific reasons or triggers for insomnia proven by scientific reports and studies, but this sleeping disorder has been connected with stress, anxiety, and poor sleeping environments. The drastic emergence of smartphones has stirred a call for the development of healthcare-related apps for different disorders and health concerns. One good thing about insomnia smartphone software is that it could monitor sleeping patterns and sleep cycles. Download the app on App Store or Google Play now. Response to Article “Adopting AI in Healthcare” Dr. 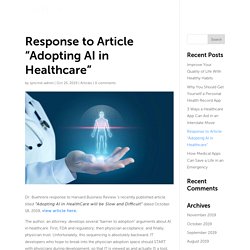 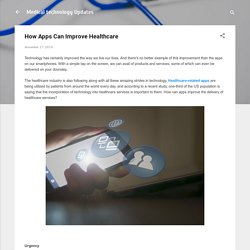 But due to busy schedules, women tend to disregard their health status, especially their reproductive health. Due to this reason, most women-related diseases such as breast, cervical, and ovarian cancer are discovered late. In addition to that, the lack of time and interest to visit the gynecologist results in untreated female reproductive and sexual issues. How The Smartphone became the Cornerstone of Daily Life. The smartphone is arguably the most ubiquitous device in the modern era, and one of the most practical products of technology today. 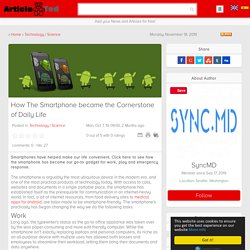 With access to calls, websites and documents in a single portable place, the smartphone has established itself as the prerequisite for communication in an internet-heavy world. In fact, a lot of internet resources, from food delivery sites to medical apps for android, are tailor-made to be smartphone-friendly. The smartphone’s practically has began changing the way we do the following tasks. Long ago, the typewriter’s status as the go-to office appliance was taken over by the less paper-consuming and more edit-friendly computer. While the smartphone isn’t exactly replacing laptops and personal computers, its niche as an all-purpose device with multiple uses has allowed both bosses and employees to streamline their workload, letting them bring their documents and data anywhere. Functions That All EHR Apps Should Have by Sync MD. By Sync MD Electronic Health Record App Health apps have become a growing niche in the app market, comprising around 6% of all available apps in major app stores. 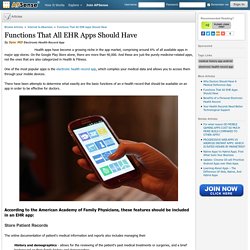 On the Google Play Store alone, there are more than 40,000. And these are just the purely medicine-related apps, not the ones that are also categorized in Health & Fitness. One of the most popular apps is the electronic health record app, which compiles your medical data and allows you to access them through your mobile devices. Improve Your Quality of Life With Healthy Habits. Health is not just about maintaining physical appearance. 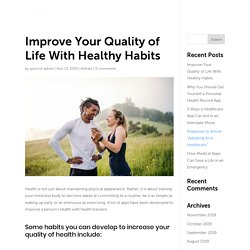 Rather, it is about training your mind and body to become adept at committing to a routine, be it as simple as waking up early or as strenuous as exercising. A lot of apps have been developed to improve a person’s health with health trackers. Urinary Incontinence? Worry No More, This Article Will Help You. Every day, medical apps for patients for iPhone or Android smartphones are being developed for different health and nutrition needs. 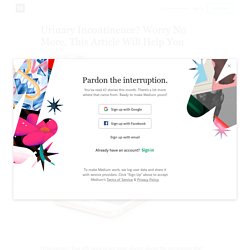 Why Go Digital and Why SyncMD? In the modern era, everything are bound to go digital or exist in the digital world as a virtual persona. 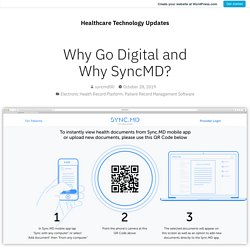 Being able to connect with the world wide web bridges gaps that separate people from opposites parts of the world. Through the digitalization of transportation, traffic and logistic problems in travel became easier to manage. Communication also benefited from digital technology as the responsiveness of users became faster regardless of distance. Why Digitalizing Medical Services Matter? 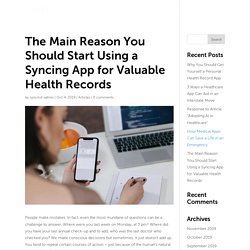 In fact, even the most mundane of questions can be a challenge to answer. How Useful are Mobile Health Records? Thousands of apps for virtually any purpose you can think of are being developed and sold all over the world as we speak. Their uses can range from games to pass the time, image and video editing, to monitoring your investments in the stock market. When it comes to healthcare, there are numerous mobile apps for medical professionals and patients. Medical apps have created a small but still-growing niche in the digital market. Why You Should Get Yourself a Personal Health Record App. Before the digital era, clinical visits would involve dozens of notes from consultation exams, thick paper charts, and heaps of documents. These practices continued for a long time until the advent of the Computer Age gave physicians an alternative platform, taking their data from the physical world to the digital.

While paper is still used, physical documents are no longer the sole source of medical information, and digital data has greatly increased the efficiency and productivity of physicians. However, the medical conveniences of the digital age is not exclusive to doctors. Patients too can benefit from digital platforms that allow them to manage their health records. A Personal Health Record is an example of such a digital platform.

Benefits of a Personal Health Record. Why Medical Errors Persist, And How To Avoid It. Did you know that according to a study conducted to more than 300,000 patients, at least twelve percent of preventable medical errors caused dismemberment or death? Technically, more than one out of ten patients were harmed during medical care. These numbers are upsetting statistics and are technically telling us to do something about it. Features To Find In A Fertility App. If something exists, chances are there’s an app for it. There are survival guide apps, sound mixers, and even tide charts. The same rule applies for medical-related matters. Mobile apps for patients and for doctors are quickly becoming popular in the past few years.

How Smartphones Help Track Prostate Cancer Symptoms and Side Effects. According to a 2018 epidemiological report, there are an estimated 1.2 million new cases of prostate cancer worldwide. It has become the second deadliest cancer for men, and the cause for almost four percent of cancer mortality in men. These are very alarming numbers, especially since prostate cancer is asymptomatic at an early stage – which means it can only be detected through active surveillance. Statistically, unlike women, men do not usually go to doctors or prostate specialists for regular medical check-ups. Using Smartphones in an Emergency. 3 Ways a Healthcare App Can Aid in an Interstate Move. The Streamlined Life. How Medical Apps Can Save a Life in an Emergency.