HistoryNet. Suffragists picket the White House in 1917 to remind President Woodrow Wilson of his wartime pledge to fight for democratic principles. 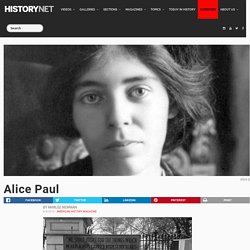 (Library of Congress) The National Woman Suffrage Procession of 1913 was the brainchild of New Jersey Quaker Alice Paul, fresh from years of study in England. Beyond schooling, Paul’s time in England introduced her to the aggressive and militant tactics of the British suffrage movement. Alice Paul Quotes - BrainyQuote. Alice Paul - Belmont-Paul Women's Equality National Monument (U.S. National Park Service) Alice Paul was one of the most prominent members of 20th-century women's rights movement. 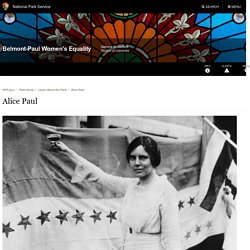 An outspoken suffragist and feminist, she tirelessly led the charge for women's suffrage and equal rights in the United States. Born to a New Jersey Quaker family in 1885, young Alice grew up attending suffragist meetings with her mother. Alice Paul Biography. Alice Paul was an early 20th century women’s rights activist who played a key role in the women’s suffrage movement that led to the passage of the 19th Amendment to the U.S. 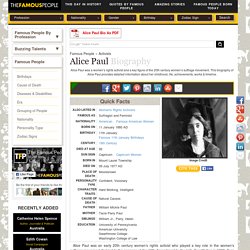 Constitution in 1920. Born into a Quaker family, she had a comfortable upbringing. Today in History - January 11. Equality of Rights Under the Law Shall Not Be Denied or Abridged By the United States Or Any State On Account of Sex. 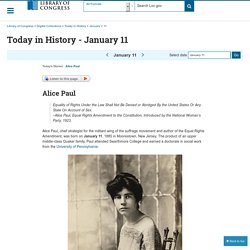 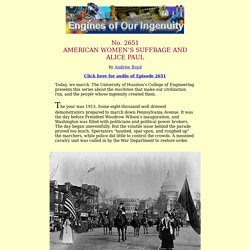 Their goal: a constitutional amendment giving women the right to vote. It was a pivotal moment in the women’s suffrage movement. Alice Paul is having a moment: Column. Until recently, was a relatively obscure hero of the American women’s movement. 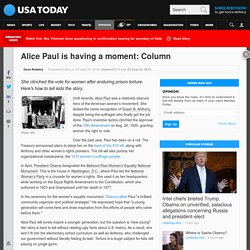 She lacked the name recognition of , despite being the suffragist who finally got the job done. Paul’s inventive tactics clinched the approval of the 19th Amendment on Aug. 26, 1920, granting women the right to vote. Paul, Alice - National Women’s Hall of Fame. While earning degrees in law and social work, Alice Paul studied in London and joined the radical British suffrage movement. 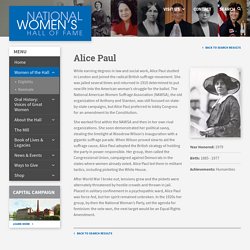 She was jailed several times and returned in 1910 determined to put new life into the American woman’s struggle for the ballot. The National American Women Suffrage Association (NAWSA), the old organization of Anthony and Stanton, was still focused on state-by-state campaigns, but Alice Paul preferred to lobby Congress for an amendment to the Constitution. She worked first within the NAWSA and then in her own rival organizations. She soon demonstrated her political savvy, stealing the limelight at Woodrow Wilson’s inauguration with a gigantic suffrage parade. Alice Stokes Paul (1885 - 1977) - Genealogy. Alice Paul was an American suffragist leader. 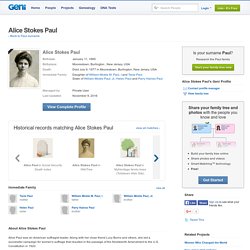 Along with her close friend Lucy Burns and others, she led a successful campaign for women's suffrage that resulted in the passage of the Nineteenth Amendment to the U.S. Constitution in 1920. In 1912, Alice Paul joined the National American Woman Suffrage Association (NAWSA) and was appointed Chairwoman of their Congressional Committee in Washington, DC After months of fundraising and raising awareness for the cause, membership numbers went up and in 1913 Alice Paul and Lucy Burns formed the Congressional Union for Women Suffrage. Their focus was lobbying for a constitutional amendment to secure the right to vote for women. Such an amendment had originally been sought by suffragists Susan B. Alice Paul. Alice Paul, 1901. 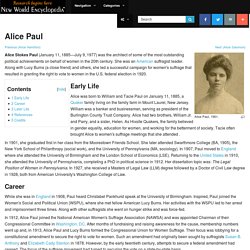 Alice Stokes Paul (January 11, 1885—July 9, 1977) was the architect of some of the most outstanding political achievements on behalf of women in the 20th century. She was an American suffragist leader. Unsung Heroes: Alice Paul. Alice Paul. Few people devote their entire lives to one cause as Alice Paul did. 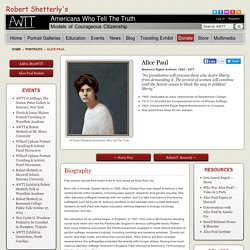 Born into a Hicksite Quaker family in 1885, Alice Stokes Paul was raised to believe in the central tenets of the Quakers, including plain speech, simplicity, and gender equality. She often attended suffragist meetings with her mother, and it is little coincidence that famous suffragists such as Susan B. Anthony (profiled on this website) and Lucretia Mott were Quakers as well. Paul was highly educated, earning degrees in biology, sociology, economics, and law.

Alice Paul - Women on 20s. Alice Paul (1885-1977) “There will never be a new world order until women are a part of it.” A leader in the fight for women’s rights for seventy years, Alice Paul advocated for a nonviolent civil disobedience campaign that included large-scale marches in Washington, DC, picketing at the White House, and hunger strikes in prison. Her tactics resulted in the passage of the Nineteenth Amendment to the US Constitution in 1920, giving women the right to vote. Soon after, she turned her attention to promoting an equal rights amendment to protect women from discrimination. She led the National Women’s Party for a half-century. Alice Paul: Champion of Woman Suffrage. The National Museum of American History and photographer Robert Weingarten are working in collaboration to build a historic portrait with help from the public. During the week of May 7-11, the museum will present five blogs about significant individuals in American history.

Between May 11-28, visitors can vote on which of these historic figures they would most like to see depicted in the portrait. Once a winner is announced, the public will have further opportunity to contribute to Weingarten’s unique process of visual biography. The finished portrait will be displayed at the Smithsonian this fall. Alice Paul, suffragist and activist, in 10 facts. Ninety-four years ago today, the Nineteenth Amendment to the Constitution of the United States took effect, enshrining American women’s right to vote. Fifty years later, in the midst of a new wave of feminist activism, Congress designated 26 August as Women’s Equality Day in the United States. The 1971 Joint Resolution read, in part, “the women of the United States have been treated as second-class citizens and have not been entitled the full rights and privileges, public or private, legal or institutional, which are available to male citizens of the United States” and women “have united to assure that these rights and privileges are available to all citizens equally regardless of sex.”

For that reason, Congress was prevailed upon to declare 26 August a day to commemorate the the Nineteenth Amendment as a “symbol of the continued fight for equal rights.” Alice Paul was a pivotal and controversial figure in the last years of the American battle to win the vote for women. 1. Who Was Alice Paul - API. Raised in an area founded by her Quaker ancestors, Alice and her family remained devoted observers of the faith. As Hicksite Friends, the Paul family adhered to Quaker traditions of simplicity and plain speech (replacing you and yours with “thee” and “thy” when talking with other Quakers). Alice attended a Hicksite school in Moorestown, New Jersey, and graduated first in her class in 1901.

Hicksite Friends endorsed the concept of gender equality as a central tenet of their religion and a societal norm of Quaker life. As Paul noted years later, “When the Quakers were founded…one of their principles was and is equality of the sexes. So I never had any other idea…the principle was always there.” Alice Paul. American suffragist. Profile of American suffragist Alice Paul. When on January 10, 1917, Alice Paul challenged Woodrow Wilson to a political face-off, she was a day shy of 32, a slightly built New Jersey Quaker with a crown of dark hair and compelling violet-blue eyes--“great earnest childlike eyes that seem to seize you and hold you to her purpose,” wrote a supporter. “Suffragists Carry Fight to Gates of White House,” clamored the headlines. Picketing the White House, a first in the annals of protest, capped a four-year campaign for a federal women’s suffrage amendment that had made Paul the country’s most controversial suffrage leader.