Why Aamir Khan WON'T allow Dangal to release in Pakistan - Bollywood Gossip. Actor-producer Aamir Khan is against releasing his Bollywood blockbuster “Dangal” in Pakistan after the censor board there demanded that 2 scenes involving the Indian flag and anthem be cut. 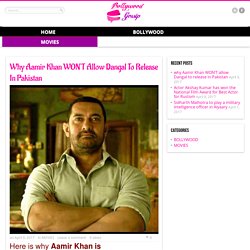 Mobashir Hasan, Pakistan’s Central Board of Film Censors (CBFC) head, told IANS over social media: “Yes, the board unanimously decided to skip two scenes.” A source says, “When the film went to the Pakistan censor board, they were fine with it except for two particular scenes towards the end — one in which the Indian flag is shown and another in which the Indian national anthem is played after Geeta Phogat (played by Fatima Sana Shaikh) wins the gold medal. Asked why the Indian flag and anthem required to be cut, Hasan said: “The call is the collective wisdom of the board.” He further added that it was currently up to the local distributor — Geo Films — to release it or not. 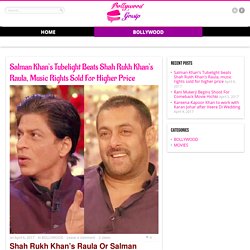 And while the film release will decide who is the winner between the 2 Khan’s. The minute Kabir Khan’s ‘Tubelight’ starring Salman Khan was announced, it became the talk of the town. Set against the background of the Indo-China war of 1962, the film will see Salman as a soldier. while fans arepatiently looking forward to the film to hit the silver screens. Well, as per the reports in DNA, the music rights of each the films are already sold. according to the daily, while Raula’s music rights are sold to Sony music india for 15 crores, Tubelights music rights are sold to the same company (Sony music india) for 20 crores. Bollywood Gossip - All About Bollywood News.