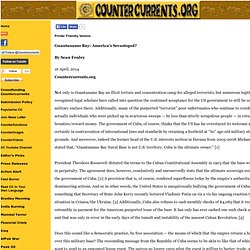 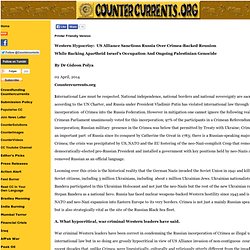 National independence, national borders and national sovereignty are sacrosanct according to the UN Charter, and Russia under President Vladimir Putin has violated international law through the incorporation of Crimea into the Russia Federation. Looming over this crisis is the historical reality that the German Nazis invaded the Soviet Union in 1941 and killed 25 million Soviet citizens, including 3 million Ukrainians, including about 1 million Ukrainian Jews. A. UK Prime Minister David Cameron: “ Russia has sought to annex Crimea . UK Foreign Minister William Hague: “You just don't invade another country on phoney pretexts in order to assert your interests. 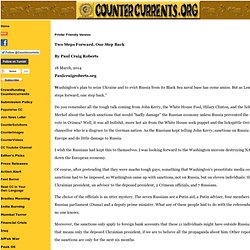 Russia Annexing Crimea is the Cost of US/EU intervention in Ukraine. By Michael Scheuer March 17, 2014 "Information Clearing House - "RPI"- - One wonders how deep a hole the United States and the EU are going to dig for themselves in Ukraine. 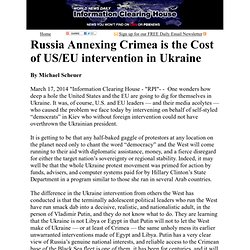 It was, of course, U.S. and EU leaders — and their media acolytes — who caused the problem we face today by intervening on behalf of self-styled “democrats” in Kiev who without foreign intervention could not have overthrown the Ukrainian president. It is getting to be that any half-baked gaggle of protestors at any location on the planet need only to chant the word “democracy” and the West will come running to their aid with diplomatic assistance, money, and a fierce disregard for either the target nation’s sovereignty or regional stability. Indeed, it may well be that the whole Ukraine protest movement was primed for action by funds, advisers, and computer systems paid for by Hillary Clinton’s State Department in a program similar to those she ran in several Arab countries. 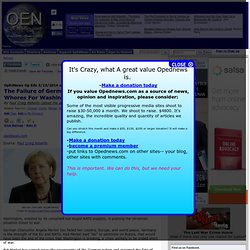 German Chancellor Angela Merkel has failed her country, Europe, and world peace. Germany is the strength of the EU and NATO. Had Merkel said "No" to sanctions on Russia, that would have been the end of the crisis that Washington is brewing, a crisis unlikely to be ended short of war. Printing: Crimea’s Case for Leaving Ukraine. Virtually everyone in Official Washington is condemning Russian “aggression” in Ukraine and demanding a belligerent U.S. response to Crimea’s desire to secede and join Russia, as a new Cold War hysteria grips U.S. pols and pundits, reports Robert Parry. 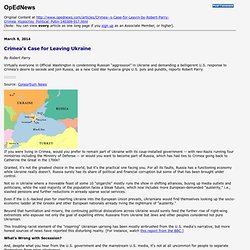 Granted, it's not the greatest choice in the world, but it's the practical one facing you. For all its faults, Russia has a functioning economy while Ukraine really doesn't. Russia surely has its share of political and financial corruption but some of that has been brought under control. Vladimír Putin ospravedlňuje vojenské akce na Krymu. After Initial Triumph, Ukraine’s Leaders Face Battle for Credibility. KIEV, Ukraine — The United States and the European Union have embraced the revolution here as another flowering of democracy, a blow to authoritarianism and kleptocracy in the former Soviet space. But successful revolutions, as the interim government here has been learning, are a lot harder to maintain than it can seem in the bright dawn of first victories. The challenges for Ukraine’s new leaders are many and varied. With President Vladimir V. Putin of Russia now openly intent on a military showdown over control of Crimea, the government faces a powerful test of Ukraine’s territorial integrity. 2014 Crimean crisis. The Crimean crisis is an ongoing international crisis principally involving Russia and Ukraine. 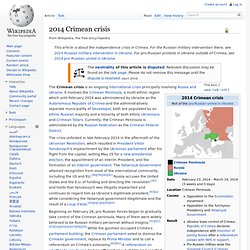 It involves the Crimean Peninsula, a multi-ethnic region which until February 2014 was administered by Ukraine as the Autonomous Republic of Crimea and the administratively separate municipality of Sevastopol, both are populated by an ethnic Russian majority and a minority of both ethnic Ukrainians and Crimean Tatars. Currently, the Crimean Peninsula is administered by the Russian Federation as the Crimean Federal District. The crisis unfolded in late February 2014 in the aftermath of the Ukrainian Revolution, which resulted in President Viktor Yanukovych's impeachment by the Ukrainian parliament after his flight from the capital, setting May 25 for a new presidential election, the appointment of an interim President, and the formation of an interim government. Beginning on February 26, pro-Russian forces began to gradually take control of the Crimean peninsula. Background[edit] Crimea - Curiyo.com.