English pages. CIA Asset News Reporter Admits All News is FAKE! Reporters are Bought Off! (Redsilverj) Nsa. N.S.A. Collecting Millions of Faces From Web Images. The is harvesting huge numbers of images of people from communications that it intercepts through its global surveillance operations for use in sophisticated facial recognition programs, according to top-secret documents. 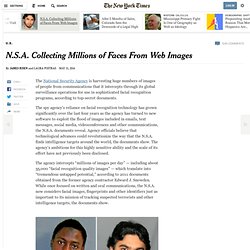 NSA National Security Agency. Counter-terrorism expert lists 10 impacts of NSA on cloud security. San Francisco - The NSA is so good at collecting intelligence that it has the potential to create a police surveillance state that could never be shut off, counter-terrorism expert Richard Clarke said during his keynote address at the Cloud Security Alliance Summit taking place Monday at the RSA Conference. 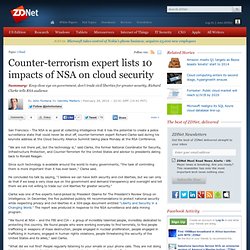 "We are not there yet, but the technology is," said Clarke, the former National Coordinator for Security, Infrastructure Protection, and Counter-Terrorism for the United States and advisor to presidents dating back to Ronald Reagan. National Security Agency. The National Security Agency (NSA) is a U.S. intelligence agency responsible for providing the United States government with encrypted communications (information assurance) and the reading of encrypted communications (signals intelligence) of other nations. 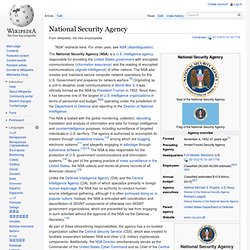 The NSA also creates and maintains secure computer network operations for the U.S. Government and prepares for network warfare.[8] Originating as a unit to decipher code communications in World War II, it was officially formed as the NSA by President Truman in 1952. Since then, it has become one of the largest of U.S. intelligence organizations in terms of personnel and budget,[6][9] operating under the jurisdiction of the Department of Defense and reporting to the Director of National Intelligence.

NSA. Printing: N.S.A. Devises Radio Pathway Into Computers - NYTimes.com. January 15, 2014 By Susan Lee Schwartz "WASHINGTON — The National Security Agency has implanted software in nearly 100,000 computers around the world that allows the United States to conduct surveillance on those machines and can also create a digital highway for launching cyberattacks. 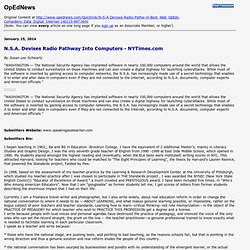 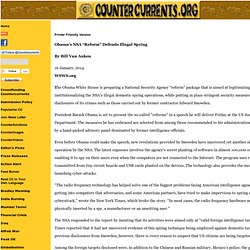 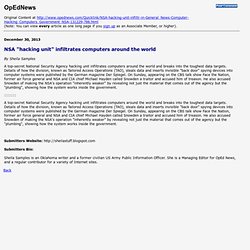 N.Y. judge rules NSA phone surveillance is legal. A federal judge ruled on Friday that the National Security Agency's bulk collection of millions of Americans' telephone and Internet records is legal and a critical component of the country's effort to combat the threat of terrorism. 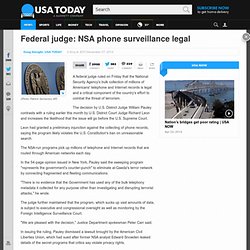 The decision by U.S. District Judge William Pauley contrasts with a ruling earlier this month by U.S. District Court Judge Richard Leon and increases the likelihood that the issue will go before the U.S. Supreme Court. Leon had granted a preliminary injunction against the collecting of phone records, saying the program likely violates the U.S. White House panel: Little to no indication mass NSA surveillance thwarts terrorism.

US fighting ‘fictional’ terrorism. Sherwood Ross, a Florida-based civil rights activist, says the US National Security Agency’s spying efforts have “nothing to do with terrorism,” as claimed by the super spy agency. 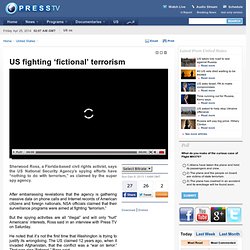 After embarrassing revelations that the agency is gathering massive data on phone calls and Internet records of American citizens and foreign nationals, NSA officials claimed that their surveillance programs were aimed at fighting “terrorism.” But the spying activities are all “illegal” and will only “hurt” Americans’ interests, Ross said in an interview with Press TV on Saturday. Latest Snowden leak reveals NSA's goal to continually expand surveillance abilities. Original published at RT The National Security Agency (NSA) headquarters at Fort Meade, Maryland(image by (AFP Photo / Saul Loeb)) In a mission statement last year the US National Security Agency described how it would continue to expand its power and assert itself as the global leader in clandestine surveillance, according to a new report based on the Edward Snowden leaks.

Poll’s lesson for NSA: Show that surveillance programs actually combat terrorism. Thirteen percent of respondents opposed U.S. personnel carrying out such an act, and 23 percent had no opinion. 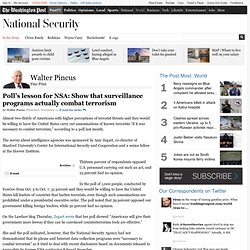 In the poll of 1,000 people, conducted by YouGov from Oct. 5 to Oct. 7, 31 percent said they would be willing to have the United States kill leaders of countries that harbor terrorists, even though such assassinations are prohibited under a presidential executive order. The poll noted that 39 percent opposed our government killing foreign leaders, while 30 percent had no opinion. Whistleblowers. List of whistleblowers. From Wikipedia, the free encyclopedia This is a list of major whistleblowers from various countries. 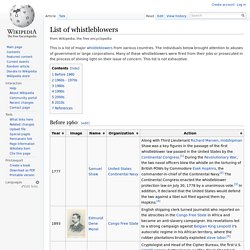 The individuals below brought attention to abuses of government or large corporations. Many of these whistleblowers were fired from their jobs or prosecuted in the process of shining light on their issue of concern. This list is not exhaustive. Before 1960[edit] 1960s - 1970s[edit] 1980s[edit] 1990s[edit] 2000s[edit] Whistleblowers. Whistleblower. A whistleblower (whistle-blower or whistle blower)[1] is a person who exposes misconduct, alleged dishonest or illegal activity occurring in an organization.

The alleged misconduct may be classified in many ways; for example, a violation of a law, rule, regulation and/or a direct threat to public interest, such as fraud, health and safety violations, and corruption. Whistleblowers may make their allegations internally (for example, to other people within the accused organization) or externally (to regulators, law enforcement agencies, to the media or to groups concerned with the issues). Whistleblowers frequently face reprisal, sometimes at the hands of the organization or group which they have accused, sometimes from related organizations, and sometimes under law.