Who Is Going To Buy Our Debt If This War Causes China, Russia And The Rest Of The World To Turn On Us? Can the U.S. really afford to greatly anger the rest of the world when they are the ones that are paying our bills? 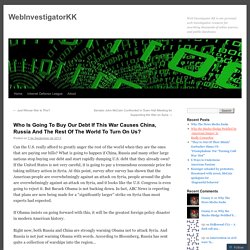 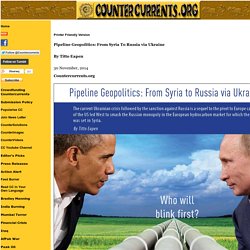 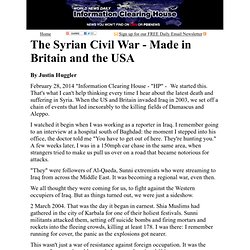 That's what I can't help thinking every time I hear about the latest death and suffering in Syria. When the US and Britain invaded Iraq in 2003, we set off a chain of events that led inexorably to the killing fields of Damascus and Aleppo. I watched it begin when I was working as a reporter in Iraq. I remember going to an interview at a hospital south of Baghdad: the moment I stepped into his office, the doctor told me "You have to get out of here. "They" were followers of Al-Qaeda, Sunni extremists who were streaming to Iraq from across the Middle East. We all thought they were coming for us, to fight against the Western occupiers of Iraq. 2 March 2004. Obama Plans to Escalate the War in Syria. By Bob Dreyfuss February 25, 2014 "Information Clearing House - "The Nation" - It’s time for the United States to surrender on Syria. 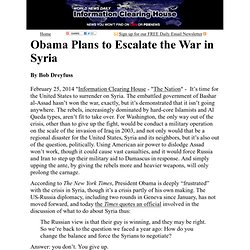 The embattled government of Bashar al-Assad hasn’t won the war, exactly, but it’s demonstrated that it isn’t going anywhere. Syrians across the Country Say No to Terrorism and Foreign Interference. Image: Al Nusrah “Freedom Fighters” 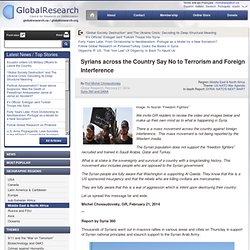 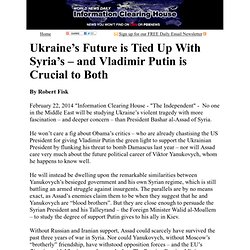 He won’t care a fig about Obama’s critics – who are already chastising the US President for giving Vladimir Putin the green light to support the Ukrainian President by flunking his threat to bomb Damascus last year – nor will Assad care very much about the future political career of Viktor Yanukovych, whom he happens to know well. He will instead be dwelling upon the remarkable similarities between Yanukovych’s besieged government and his own Syrian regime, which is still battling an armed struggle against insurgents. The parallels are by no means exact, as Assad’s enemies claim them to be when they suggest that he and Yanukovych are “blood brothers”. Syria: U.S. imperialism and diplomacy » Around the world. The much ballyhooed Geneva II peace talks, which were supposed to bring about peace in Syria, ended on Jan. 31 with no agreement for one very good reason: The U.S had no intention of seeking any real peace agreement, but was intent on using the forum as a background for propaganda and as a way to deceive and weaken the Syrian government. 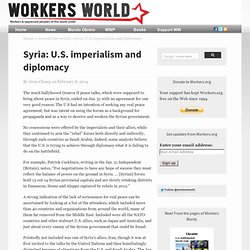 No concessions were offered by the imperialists and their allies, while they continued to arm the “rebel” forces both directly and indirectly, through such countries as Saudi Arabia. Indeed, some analysts believe that the U.S. is trying to achieve through diplomacy what it is failing to do on the battlefield. For example, Patrick Cockburn, writing in the Jan. 31 Independent (Britain), notes, “For negotiations to have any hope of success they must reflect the balance of power on the ground in Syria. … [Syrian] forces hold 13 out 14 Syrian provincial capitals and are slowly retaking districts in Damascus, Homs and Aleppo captured by rebels in 2012.”

Why 20th century colonialism cannot save Syria. The colonialism used to draw up the Middle East after World War I is of no use in modern, war-torn Syria. 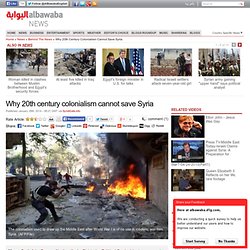 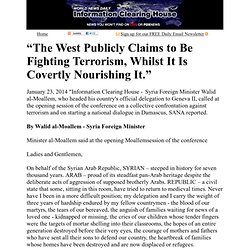 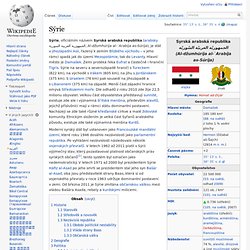 Sunni Arabs make up the largest population group in Syria. Syrian civil war. The Syrian Civil War (Arabic: الحرب الأهلية السورية‎), also known as the Syrian Uprising, is an ongoing armed conflict taking place in Syria. The unrest began in the early spring of 2011 within the context of Arab Spring protests, with nationwide protests against President Bashar al-Assad's government, whose forces responded with violent crackdowns. The conflict gradually morphed from popular protests to an armed rebellion after months of military sieges.[56] By July 2013, the Syrian government was in control of approximately 30–40% of the country's territory and 60% of the Syrian population.[60] A United Nations report in late 2012 described the conflict as being "overtly sectarian in nature", between mostly Alawite government forces, militias and other Shia groups[61] fighting largely against Sunni-dominated rebel groups,[62][63] although both opposition and government forces have denied it.[64][65] Due to foreign involvement this conflict has been called a proxy war.[66]

SÝRIE: Svědectví o válce. Al Qaeda Rebels Supported by Uncle Sam: US, Allies to Blame for Syria Attack. An analyst says the United States and its allies in the region are to blame for having helped militants in Syria to launch the deadly chemical attack on civilians in August. Michel Chossudovsky told Press TV in an interview on Friday that the US-led “military alliance” backed “the rebels in using chemical weapons” in Syria. “The United States and its allies continue to support the al-Qaeda-affiliated rebels which are involved in the process of destruction of an entire country (Syria),” he stated. Chossudovsky noted that “Israeli sponsored rebels” backed by “Qatar, Turkey, [and] Saudi Arabia” staged the chemical attack and “then blamed it on the [Syrian] government.”

Syrian opposition. The "independence flag" of Syria, used before the Ba'athist coup in 1963, has been widely used by protesters as an opposition flag and has been adopted officially by the Syrian National Coalition and the Free Syrian Army. The Syrian opposition (Arabic: المعارضة السورية‎ Al-Mu'aradah Al-Suriyah) is an umbrella term for groups and individuals calling for regime change in Syria and who oppose its Ba'athist government. Truth as an Issue. Na pravdě záleží.