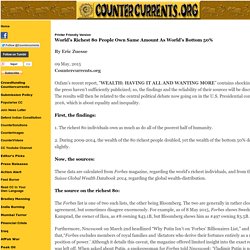 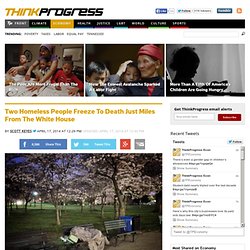 CREDIT: Shawn Davis Just a couple miles from where lawmakers set the course on everything from taxes to the availability of housing vouchers for low-income Americans, two homeless people were found dead Wednesday morning, with hypothermia being cited as the likely cause. Washington D.C. had made an effort to try to protect its homeless residents from dangerous weather this year, with new innovations such as “warming buses,,” city buses that were parked across the city with the heat on for those in need. However, when temperatures turned unseasonably cold on Tuesday, many were caught off guard. Two such homeless men, who likely spent Tuesday night outside instead of in a shelter, were found on Wednesday morning off of Pennsylvania Avenue SE.

Though just an inconvenience for many, cold temperatures can be extremely dangerous for those with no shelter. This Is The Most Depressing Version Of Google Maps I’ve Ever Seen. Colder colors mean wealthier neighborhoods; warmer colors mean poorer ones. 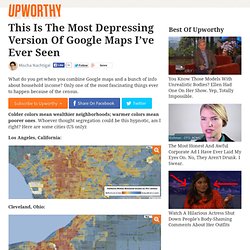 Whoever thought segregation could be this hypnotic, am I right? Here are some cities (US only): Los Angeles, California: Click image to Zoom. Social Inequality. 1M2rgVL. Thomas Piketty. 5 Hypocritical Justifications the 1% Use to Justify the America's Staggering Inequality. The duplicity seems endless as the world's richest people rationalize the staggering wealth disparity. 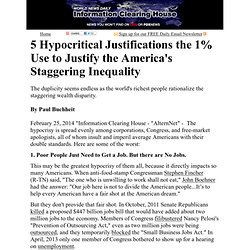 By Paul Buchheit February 25, 2014 "Information Clearing House - "AlternNet" - The hypocrisy is spread evenly among corporations, Congress, and free-market apologists, all of whom insult and imperil average Americans with their double standards. Here are some of the worst: 1. Poor People Just Need to Get a Job. This may be the greatest hypocrisy of them all, because it directly impacts so many Americans. But they don't provide that fair shot. 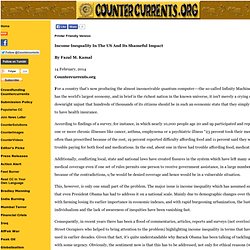 Kamal 14 February, 2014Countercurrents.org. Printer-Friendly Page. Bombshell New Book Argues That Capitalism and Democracy Don't Mix. Few books have been met with as much anticipation at Thomas Piketty’s Capital in the 21st Century. 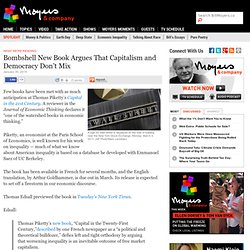 Capitalism vs. Democracy. Thomas Piketty’s new book, “Capital in the Twenty-First Century,” described by one French newspaper as a “a political and theoretical bulldozer,” defies left and right orthodoxy by arguing that worsening inequality is an inevitable outcome of free market capitalism. 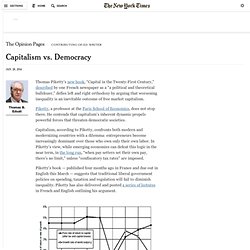 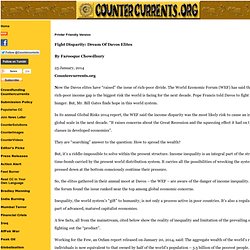 The World Economic Forum (WEF) has said that growing rich-poor income gap is the biggest risk the world is facing for the next decade. Pope Francis told Davos to fight inequality, hunger. In its annual Global Risks 2014 report, the WEF said the income disparity was the most likely risk to cause an impact on a global scale in the next decade. David Brooks' Utter Ignorance About Inequality. Source: Robert Reich Blog. 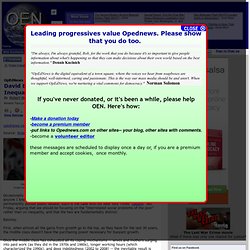 On Income Inequality and Economic Growth. Recently, a polling of some economists on the nagging poor performance of the U.S. economy concluded that the source of the problem is growing income inequality. 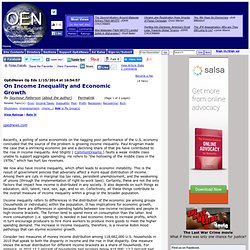 Income Redistribution's Logical Conclusion Is Communism. The Developing New American Caste System. - Advertisement - America is believed by the rest of the world to be the land of opportunity and unimpeded upward mobility. It is where people from all walks of life, backgrounds, races and color can make the best of their opportunities and talents. America attracted people from all over the world to achieve, discover, innovate and improve their lives, and this helped create the greatest society ever built by man. It used to be that in America you could make a future for yourself no matter who your parents were, what your religion or race is. Can you imagine a black president with a Moslem father becoming the elected leader in France, England or Germany? "Jobs or Inequality"? That's No Choice at All.

January 4, 2014 By Richard (RJ) Eskow Inequality is the result of economic forces such as increased financial speculation, financialization of economic profits, deregulation, trade policy, tax breaks, and other government policies which favor the wealthy and corporate interests. Ralph Nader : The Wild and Cruel Gap Between Debtors and Creditors.

The Wild and Cruel Gap Between Debtors and Creditors By Ralph Nader December 14, 2013 "Information Clearing House - The word “inequality” is much in vogue these days. We hear almost daily about the inequality of wealth, income and wages between the richest top 2 or 3 percent of people and the majority of the country’s wage earners. Economic inequality - Curiyo.com. Sociální nerovnost. Printing: Economic Inequality: 5 Personal Actions. December 6, 2013 By Bob Burnett The United States is experiencing unprecedented income inequality. It's not only affecting the lives of millions of Americans, but it's the root cause of political polarization that has paralyzed the Federal government. Here are 5 actions you can take to address economic inequality.

" Here are 5 actions you can take to help move us out of this deplorable situation. 1. 2. Economic inequality. Sociální nerovnost.