Startups. AMT Ad Strategy. AMT Market Research. UX. Pay-Per-View Football? BSkyB's Now TV is a Game-Changer. It was a long time coming, but BSkyB finally announced a launch date for its online, pay-as-you-go TV service. It will be available in the UK from tomorrow, July 17. As we noted earlier today, Now TV poses a huge threat to the likes of LoveFilm and Netflix, with its fairly extensive collection of movies available either on a per-play basis starting at £0.99, or through an affordable-but-not-cheap £15 unlimited monthly pass. Sky’s venture into the subscription-free on-demand movies space is a no-brainer really, given that competition is really starting to heat up here.

But it’s worth focusing on the other big elephant in the room. Sky Sports is arriving on Now TV later this year, which means that the lucrative English Premier League and Champions’ League will be opened up to anyone with an Internet connection. In addition to the football, this means you’ll also be able to tap England Test cricket, Heineken Cup rugby, ATP tennis and the golf Masters from Augusta. The casual fan. 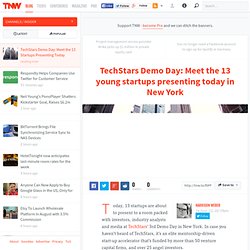 In case you haven’t heard of TechStars, it’s an elite mentorship-driven start-up accelerator that’s funded by more than 50 venture capital firms, and over 25 angel investors. TechStars operates in 4 cities nationwide (Boulder, Boston, Seattle, New York) and has more than 300 mentors, 1,000 investors and 78 alumni TechStars companies in its network. Last year, TechStars received over 3,000 applications for approximately 50 positions, making the accelerator program harder to get into than Harvard or Yale with an acceptance rate of approximately 1.50%. Here’s a look at the 13 new startups as we ready ourselves for the event. There will be plenty of announcements to report, so you’ll want to check back for more over the next few hours. 10 Sheet ➤ 10 Sheet Poptip Poptip is the most intelligent and evolved way to ask a question and get real-time results. Lua.

Product Testing. AMT Social. AMT Product. Digital Media Space. AMT Features. Design. Politicus. Storytelling. Domain Name Search. Creativity at Work. Social Bookmarking And Curation: Pinterest, Pearltrees, GimmeBar. Quote of the Day: "I get ideas about what to buy for others for the holidays from websites with best of lists (like top ten gifts for mom).” 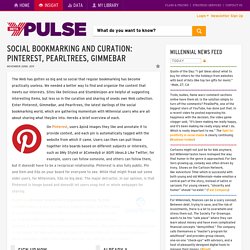 –Male, 27, CA Trolls, bullies, flame wars—comment sections online have them all. Is the solution simply to turn off the comments? PewDiePie, one of the biggest stars of YouTube, has done just that. In a recent video he posted expressing his happiness with the decision, the video game vlogger said, “It's been making me really happy, and it's been making me really enjoy what I do.

Cartoons might not just be for kids anymore, but Millennial tastes have reshaped the way that humor in the genre is approached. For Millennials, finances can be a scary concept. In 2015, emojis will get more diverse. Millennials want to save the world on the side, and look for ways to integrate social good into the things they already do. It’s Friday, which means there is probably plenty of news about young consumers that you missed this week.

De LaB. Resonate - Platform for Art and Technology. Last day in Belgrade in January 2011 and I receive a call from Maria and Jelena to quickly meet and have a quick chat before I head back to London. 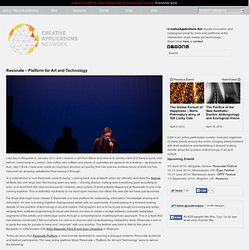 One coffee, two coffees and plenty of cigarettes we agree to do a festival – as simple as that. I don’t think I have ever made an important decision so quickly that has cost me endless hours of work but has had such an amazing satisfaction from seeing it through. In a nutshell this is how Resonate came to being. Looking back now at March when we officially launched the festival, all feels like one large blur.

Not having seen any talks – running around, making sure everything goes according to plan, and apart from the opensource panel I chaired, clear picture of what actually happened at Resonate is only now coming together. Obscura Day 2012 on April 28th. Poketo Art for Your Everyday.