How To Password-Protect A USB Drive. Nowadays, USB drives are capable of storing huge amount of data, even up to 1TB! 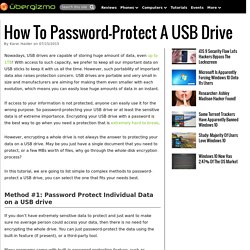 With access to such capacity, we prefer to keep all our important data on USB sticks to keep it with us all the time. However, such portability of important data also raises protection concern. USB drives are portable and very small in size and manufacturers are aiming for making them even smaller with each evolution, which means you can easily lose huge amounts of data in an instant. If access to your information is not protected, anyone can easily use it for the wrong purpose. So password-protecting your USB drive or at least the sensitive data is of extreme importance. Laptop Security in 7 Simple Steps. Imagine that tomorrow you wake up to find out a virus has infected your laptop and all your files have vanished. 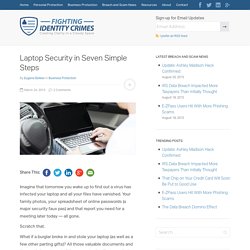 Your family photos, your spreadsheet of online passwords (a major security faux pas) and that report you need for a meeting later today — all gone. Scratch that. What if a burglar broke in and stole your laptop (as well as a few other parting gifts)? All those valuable documents and the costly investment of the computer itself are now in the hands of a criminal. Encrypting Your Laptop Like You Mean It. Time and again, people are told there is one obvious way to mitigate privacy threats of all sorts, from mass government surveillance to pervasive online tracking to cybercriminals: Encryption. 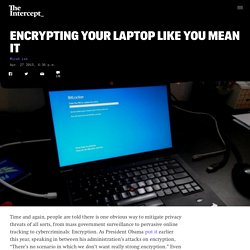 As President Obama put it earlier this year, speaking in between his administration’s attacks on encryption, “There’s no scenario in which we don’t want really strong encryption.” Even after helping expose all the ways the government can get its hands on your data, NSA whistleblower Edward Snowden still maintained, “Encryption works. Properly implemented strong crypto systems are one of the few things that you can rely on.” How to make it harder for hackers to assemble your personal information. Photo illustration by Slate. 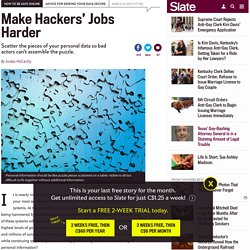 Photos by Thinkstock. It is nearly impossible to participate in modern society without entrusting your most sensitive personal information to countless Internet-based systems. At the same time, even the most well-resourced organizations are being hammered by sophisticated digital attacks, making it difficult to trust that any of these systems will keep our information safe. So the question debated at the highest levels of government, and by dozens of industries, thousands of companies, and millions of consumers, is: How can you keep your personal information secure while continuing to participate in a society powered by the extensive sharing of personal information? However, that’s probably not the question we should be asking.

To address the challenges posed by the always-on sharing economy, we need to shift the way we think about personal security. So what, then, can people to do safeguard their online accounts, reputations, and identities? How to Anonymize Everything You Do Online. One year after the first revelations of Edward Snowden, cryptography has shifted from an obscure branch of computer science to an almost mainstream notion: It’s possible, user privacy groups and a growing industry of crypto-focused companies tell us, to encrypt everything from emails to IMs to a gif of a motorcycle jumping over a plane. 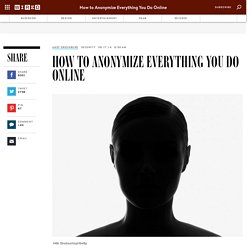 But it’s also possible to go a step closer toward true privacy online. Mere encryption hides the content of messages, but not who’s communicating. Use cryptographic anonymity tools to hide your identity, on the other hand, and network eavesdroppers may not even know where to find your communications, let alone snoop on them.

“Hide in the network,” security guru Bruce Schneier made his first tip for evading the NSA. “The less obvious you are, the safer you are.” Though it’s hardly the sole means of achieving online anonymity, the software known as Tor has become the most vouchsafed and developer-friendly method for using the Internet incognito. Email. How to (almost) hide your tech gadgets from being tracked. The recent leak of documents to the CBC showing that the Canadian Security Establishment Agency used the free Wi-Fi service to track travellers in a major Canadian airport — even after they left the terminal — is the latest example of how valuable location data increasingly is, and how it can be captured without your consent. 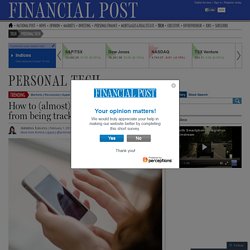 15 tips for protecting your privacy online. Canada's privacy commissioner released a statement on Dec. 5 saying that web users should always be able to opt out of online tracking used by companies to provide them with targeted advertising. 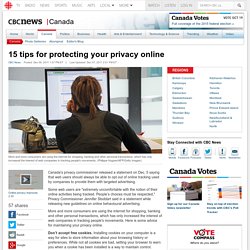 Some web users are "extremely uncomfortable with the notion of their online activities being tracked. People’s choices must be respected," Privacy Commissioner Jennifer Stoddart said in a statement while releasing new guidelines on online behavioural advertising. More and more consumers are using the internet for shopping, banking and other personal transactions, which has only increased the interest of web companies in tracking people's movements. Here is some advice for maintaining your privacy online. Don’t accept free cookies. Check all security settings. Clear your cache. Use a firewall. How To Password-Protect A USB Drive. Virtualización de VMware para escritorios, servidores, aplicaciones, y nubes públicas y privadas. How to Delete Something Permanently From Your Computer. Do you have a file on your computer that you want to obliterate? 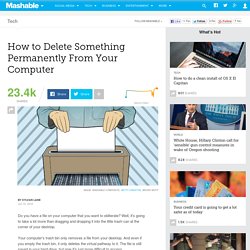 Well, it's going to take a lot more than dragging and dropping it into the little trash can at the corner of your desktop. Your computer's trash bin only removes a file from your desktop. And even if you empty the trash bin, it only deletes the virtual pathway to it. The file is still saved in your hard drive, but now it's just more difficult to access. There are a few easy and effective ways of getting rid of that file once and for all, and they all involve overwriting the file with other data.