Attorney Joseph Jardine has the experience and skill set necessary to seek a favorable outcome for you and your family, especially the residents of Farmington. 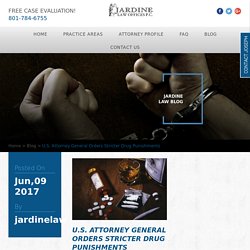 Attorney General Jeff Sessions ordered federal prosecutors to be even harsher on drug crimes offenders. Sessions said there is a moral responsibility on the part of the government to make sure the country is not contaminated by drugs and drug criminals. Prior to Sessions becoming Attorney General, drug punishments were loosened a little bit due to the number of lower-level drug offenders receiving long jail sentences. Former U.S. Attorney General Eric Holder disagrees with the move to tighten drug punishments for certain offenders, saying it will “take the nation back to a discredited past.” Many drug offenders who come through the court system are usually not big time drug lords, but instead, have been caught with a small amount of narcotics. Sessions – Sessions believes that his new order is in accordance with the Justice Department taking responsibility to protect the citizens of this country, while promoting respect for the legal system.

What Does This Mean? Drug Possession in Farmington Could Carry Serious Consequences - jardine. Adults may not want to admit it to their children, but for many of them, they have had their experimental phases with alcohol and drugs. 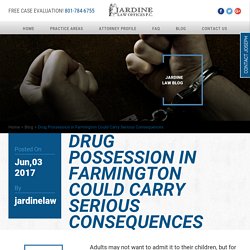 But it seems like the past two generations got off a little easier (as long as they were not major players in any type of drug cartel) compared to the consequences individuals face today. Today, with the strict laws on drugs and near-zero tolerance policy, someone could get a heavy sentence for a what could be considered by some as a “victimless crime.” An entire future could be ruined because of a minor indiscretion. Having a drug conviction on your record could seriously damage your ability to perform as a productive member of society. If you live in Farmington and you have been charged with drug possession, you need a criminal defense attorney who can help you get your future back on track.

Even though a lot of adults experimented with drugs when they were younger, the law takes possession and use of illicit substances very seriously. Assault and Battery Usually Leads to Hiring a Defense Attorney - jardine. Sometimes our anger gets the best of us in certain situations and we may do something we regret, like hit someone else. 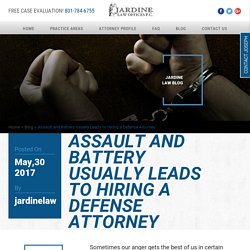 This is common usually in bars, on the scene of an accident, or in everyday life if you’re having a bad day and someone agitates to the point of violence. The best way to keep out of trouble is to learn how to control your temper and to walk away. Unfortunately, that is rarely the case. Fights have been known to break out at professional ball games, especially when one team wins and the losing team’s sports fans are taunted. It can be an all out brawl in the stadium and in the streets. If you find yourself in a situation where you need an assault and battery defense attorney in Farmington call Jardine Law Offices, P.C. Situations in which assault and battery are more likely to occur include: The scene of a car accident – Sometimes after a car accident tempers are high and adrenaline is rushing through your body.

Being Accused of Domestic Violence Can Harm More than Your Reputation - jardine. Domestic violence is defined as “violent or aggressive behavior within the household, usually involving a spouse or significant other.” 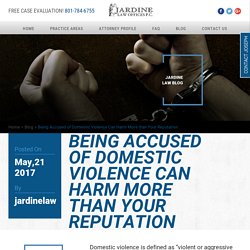 However, when the claims are false, it says much more about the supposed victim. If your domestic partner has accused you of domestic violence, you need to take action. Every couple argues at some point in their relationship. Drug Crimes in Farmington Are Serious Offenses and Need an Experienced Drug Crimes Defense Attorney - jardine. Sometimes people experiment with different things in life. 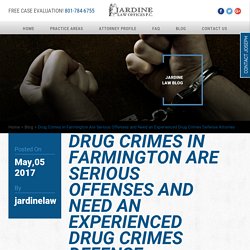 Some are action junkies. Some get addicted cheating, while others try their hand at gambling. But sometimes you can go overboard. When an action junkie starts taking unnecessary risks it could lead to them paying the ultimate price. Infidelity, although it may not lead to death – hopefully – can cost someone their family, friends and even their job and reputation. Jardine Law Offices P.C. empathizes with those who are addicted to drugs because it is a disease and shouldn’t be punished without treatment. In the United States, illegal drugs and crime are correlated in many ways. Many people start experimenting with drugs as early as their teen years – some even younger.