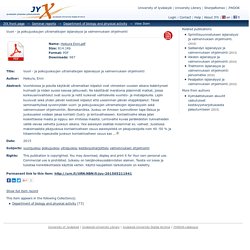 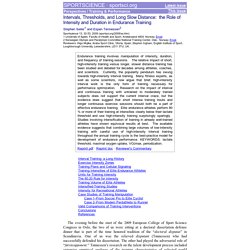 Coach Hughes: Training for Older Riders. "When I did my first transcontinental in 1981, I finished in 12-1/2 days and I was toast! 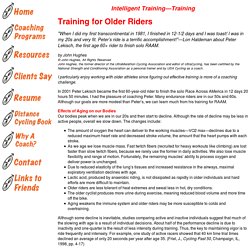 I was in my 20s and very fit. Peter’s ride is a terrific accomplishment! "—Lon Haldeman about Peter Lekisch, the first age 60+ rider to finish solo RAAM. by John Hughes © John Hughes, All Rights Reserved John Hughes, the former director of the UltraMarathon Cycling Association and editor of UltraCycling, has been certified by the National Strength and Conditioning Association as a personal trainer and by USA Cycling as a coach. EverythingByShermer. Title. Training methods employed by accomplished RAAM racers by Bernie Comeau Bernie Comeau, a veteran of RAAM and Furnace Creek, edits "From the Field" - a series of articles on what accomplished RAAM racers (the elite of the ultra community) do and use in order to be successful. 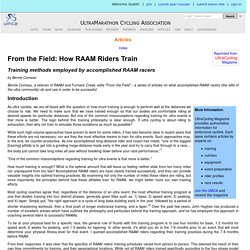 Introduction As ultra cyclists, we are all faced with the question of how much training is enough to perform well at the distances we choose to ride. We need to make sure that we have trained enough so that our bodies are comfortable riding at desired speeds for particular distances. Contador planning final season of Tour de France success.

Better to burn out than to fade away. 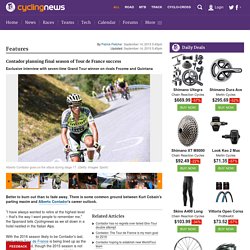 There is some common ground between Kurt Cobain's parting maxim and Alberto Contador's career outlook. "I have always wanted to retire at the highest level – that's the way I want people to remember me," the Spaniard tells Cyclingnews as we sit down in a hotel nestled in the Italian Alps. With the 2016 season likely to be Contador's last, next year's Tour de France is being lined up as the final firework and, though the 2015 season is not yet over, he already seems immersed in his project. "The primary objective is the Tour de France. LONG AND EASY- Rethinking Our Approach to Endurance - Strong Swift Durable. LONG AND EASY Rethinking Our Approach to Endurance Cycles by Jordan Smothermon We start our endurance cycle this week and it’s built around a couple of central ideas. 1. 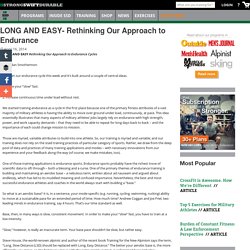 What Can You Do in Three Weeks? ~ Hunter Allen Power Blog. All the grand tours are three weeks long. 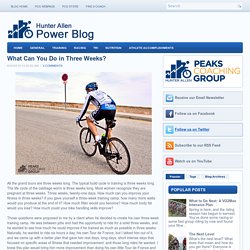 The typical build cycle in training is three weeks long. The life cycle of the cabbage worm is three weeks long. Most women recognize they are pregnant at three weeks. Three weeks, twenty-one days. 3 Steps to Preparing for Back-To-Back Events (or, Why the Giro-Tour Double is so hard!) - CTS. One of the best things about having a staff of full-time coaches is the impromptu coaching round-table discussions we tend to have. 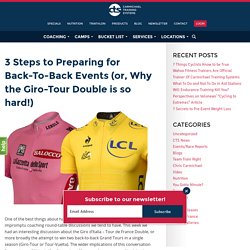 This week we had an interesting discussion about the Giro d’Italia – Tour de France Double, or more broadly the attempt to win two back-to-back Grand Tours in a single season (Giro-Tour or Tour-Vuelta). The wider implications of this conversation for amateur athletes is the discussion of how much recovery and training is necessary to perform well in two big goal events. How far apart should the events be, and how should an athlete recover/train between the two? Altitude Experience: Successful Trekking and Climbing Above 8,000 Feet - Mike Farris - Google-kirjat. 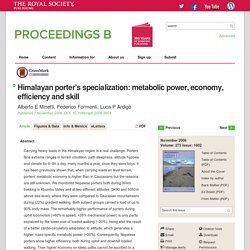 Porters face extreme ranges in terrain condition, path steepness, altitude hypoxia and climate for 6–8 h a day, many months a year, since they were boys. It has been previously shown that, when carrying loads on level terrain, porters' metabolic economy is higher than in Caucasians but the reasons are still unknown. J%20Appl%20Physiol-2002-Minetti-1039-46.pdf. Govss.pdf. Kerrison on Watts, weights and suffering. Tim Kerrison is the Australian coach brought into Team Sky to re-think the team’s training and work with ‘the GC group’ from 2010 onwards. 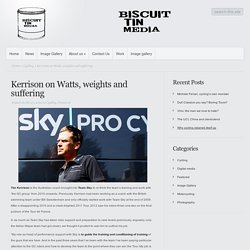 Previously, Kerrison had been working as a coach with the British swimming team under Bill Sweetenham and only officially started work with Team Sky at the end of 2009. After a disappointing 2010 and a crash-blighted 2011 Tour, 2012 saw his riders finish one-two on the final podium of the Tour de France. Chain gang. Sir Dave Brailsford, team principal Sir Dave Brailsford regularly likens his role to that of an ‘orchestra conductor’ and, after two days at the Tenerife training camp, the analogy makes perfect sense. The team is big and, with every rider and member of staff following different programmes, there are little hubs of Team Sky literally spread all over the world at any one time.

Brailsford oversees a conference call every Monday with senior staff where the past week is discussed. ‘I go to where I think I need to be, where there are issues, where I can add value,’ he says. ‘I leave it until very late and make a judgment. I spent a month in Italy for the Giro, a day at home, then to Barcelona, a meeting in London, then on the Dauphine [in France] and on and on it goes. Chain gang. Bradley Wiggins reveals Team Sky's explosive secret that has put him in contention for Tour de France. “People will think what they will think but I’m not the slightest bit bothered. I don’t read the cycling press and I don’t Twitter anymore and let people know my business. I’m a cycling recluse really and love it.”

Training time. Want to see Alberto Contador, Chris Froome and Vincenzo Nibali in action together? You could wait for the Critérium du Dauphiné in June but, as today’s L’Equipe shows, they will all meet up this month in Tenerife for training camps on Mount Teide. Quite probably they will all stay in the same hotel, setting up an intriguing atmosphere with the three great rivals for the Tour de France sitting down for dinner together, albeit at different tables. Team Sky questions and answers. IrfanView HTML-Thumbnails. 1550-2783-11-36. Polarised Training Intensities – Is Goldilocks Training Dead? Are 8-Minute Intervals Uniquely Effective? Are 8-Minute Intervals Uniquely Effective? Training periodization. Deep-root cultural heritage and innovative paradigms (2013) - Managing the distribution of training intensity: the polarized model. Revisiting Polarized Training. Revisiting Polarized Training.